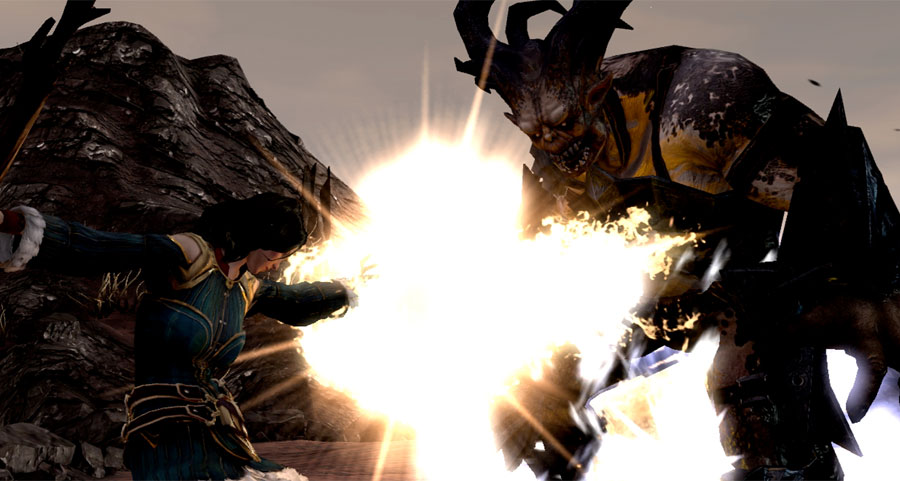 Dragon Age 2 from BioWare is the follow up to Dragon Age: Origins without most of the pomp and ceremony.  ‘Origins suffered from some hapless marketing direction that promised a sex, drugs and rock & roll-type gaming experience when, in fact, it is an RPG (Role Playing Game) full of dragons, ogres, dwarves and elves, requiring you – the player – to fight them. Fortunately, Dragon Age 2 promises and delivers a far more dependable RPG affair although not, regrettably, a very diverse one.

Technically, Dragon Age 2 is a letdown. There is a level of incongruity between the animation of the characters and the script that often crosses the line into hilarity. The voice acting is patchy at best and, at worst, disappointingly unconvincing, which isn’t helped by the lack of expression on the character models in the game. An early death in your party, for example, elicits a really half-hearted expression of regret and almost no visual clues – no frowning, tears, etc – nothing like the outpouring of grief you might expect.

The disappointing visuals aren’t limited to the stiff character animation, either: Dragon Age is plagued by some really ‘samey’ environments that look flat and lifeless and the developers have retained the excessive blood splatter effect after combat (that miraculously gets wiped clean straight afterwards), which just looks daft and breaks what little sense of connection you have with your character. There’s small variation in the setting, too, given that you spend most of the game in a single city, Kirkwall. For an RPG that professes to provide you with an ‘epic’ experience, that works considerably to the game’s detriment.

Despite the occasionally iffy voice acting, the manner of eliciting it has improved, with a ‘conversation wheel’, as seen in BioWare’s tremendous Mass Effect 2 game, providing players with the dialogue options. They’re also handily marked in tone as ‘aggressive’, ‘neutral’ or ‘sympathetic’, for want of better terms, which makes it a lot clearer than in the last game, Dragon Age: Origins, which attitude your player is taking. There’s plenty of humor, too, such as your character remarking, on encountering hostility in a Dalish camp: ‘But the Dalish are delightful. I was just thinking of inviting the whole clan over for tea’.

Combat, which makes up the bulk of the gameplay, has been simplified, presumably to reach larger audiences, and this feels like a good thing initially. However, most confrontations involve sufficient enemy numbers making things hectic very quickly, and the majority of fights seem to devolve into ‘hack and slash’ frenzies that feel confusing and dissatisfying. This can be alleviated through more judicious use of the abilities and spells, pausing the game properly as combat kicks off, but we suspect most players won’t bother.

The campaign in Dragon Age 2 is involving, and there’s real progression to your characters, in terms of skills and character attributes. Navigating the requirements for wielding certain weapons or casting specific spells is easier this time too, even on console, so it’s always clear what you need to do in order to progress.  The game will provide you with a huge amount of entertainment, lasting at least 40 hours for most players. The story isn’t sufficiently engaging to really elicit your sympathy, with under-developed characterization, but it’s interesting enough to spur you forward through the action and even, perhaps, to replay the entire game from the beginning, given the different classes and specializations available to try. Most players won’t do that, of course, but it’s a great option for RPG veterans.