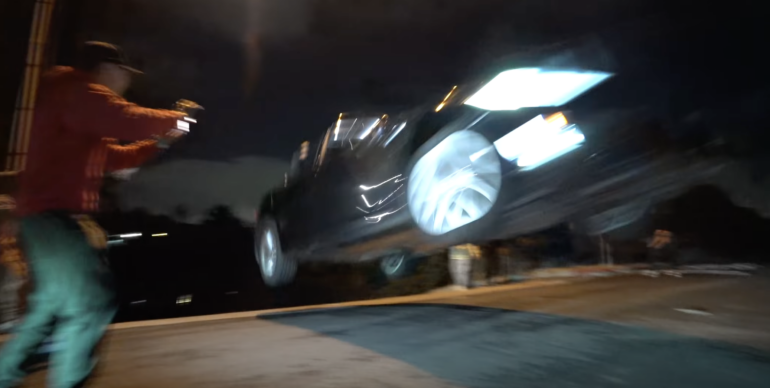 Some people will do anything to get attention on the internet. This was perfectly demonstrated when a Tesla Model S driver attempted to pull an ‘Elon Musk’ by launching his car, with passengers, into space.

According to the Los Angeles Police Department, on March 20th, the driver, who has still yet to be identified, rented a 2018 Tesla model S and was performing a variety of stunts around the city. Some were captured and shared on the internet, however, his final stunt culminated in launching the car into the air along a quiet suburban street. The Tesla’s incredible acceleration enabled it to rocket up the steep hill before literally lifting off to what seemed like 6 or 7 metres in the air, losing control, taking out a family of trash bins and a few parked cars before coming to a halt at the back of a Subaru.

According to YouTuber Alex Choi, the driver and his friends were also at a Tesla car meet up earlier that night. The driver told the group that he was planning to jump his Tesla at the Baxter and Alvarado Street hill, which is renowned for its steep apex. There were no practice runs or planning before the stunt. The driver just lined the car up and went for it. There were four people in the car during the stunt, along with a stray cat. Apparently the driver found the cat earlier that evening, bought it some food and took it with him.

Thankfully, no one was injured, including the cat, and the driver and passengers fled from the scene, abandoning the car later on. Whereabouts of all on board are unknown.

The LAPD is offering a $1,000 reward for any information that could lead to the driver’s arrest. Given there were quite a few witnesses, it’s possible that they will track the culprit down soon.

This example shows the lengths some people will go to get attention on the internet. In this case, the driver and passengers were incredibly lucky that they didn’t kill themselves or anyone in the vicinity. It should go without saying, please do not try this at home, in your car, anywhere, ever. It’s tremendously irresponsible, dangerous and stupid, not to mention illegal.