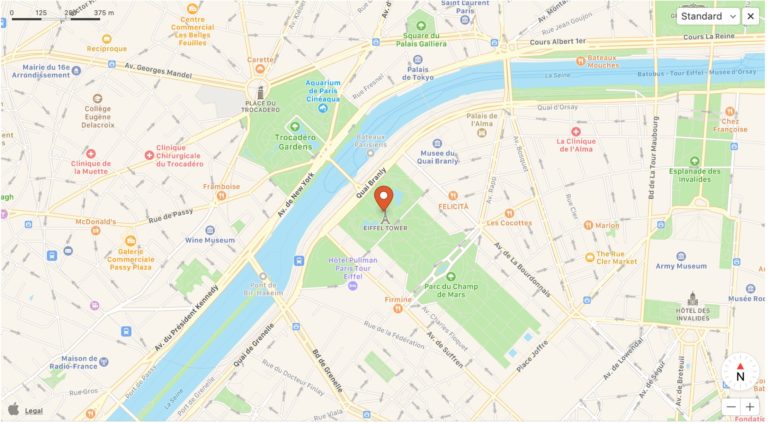 DuckDuckGo, an internet search engine known for privacy and unfiltered search results, has gone to Apple Maps for its iOS mobile and macOS desktop map and address related results.

DuckDuckGo positions itself as a search engine that puts privacy first, and as such it does not store IP addresses, does not log user information, and uses cookies only when necessary.

Simply Apple Maps are part of the iOS and macOS operating system. Its Safari browser defaults to Google Search but can change to Yahoo, Bing or DuckDuckGo.

Apple and DuckDuckGo (website here) may be capitalising on the recent jab that Apple took at CES 2019 (Apple is not an exhibitor). There is a growing below-the-line campaign to promote Apple as more ‘private’ that other major companies.

What about other devices?

On all other Android, Windows and Linux devices DuckDuckGo serves Bing Maps along with relevant search results from a compilation of “over 400” sources, including Yahoo! Search BOSS; Wolfram Alpha; Bing; its Web crawler (DuckDuckBot); and others.

GadgetGuy has used DuckDuckGo in the past and found that privacy tends to deliver far fewer results compared to the sheer volume of Google results. So, it comes down to what matters to you.

For example, if I search in DuckDuckGo for GadgetGuy.com.au, I get fewer than ten relevant results. Google Search delivers thousands as it indexes our articles. So, your choice of search engine comes down to your needs.

Privacy is also a function of your browser, its settings and third-party advertising and pop-up blockers like Ghostery (highly recommended by GadgetGuy as a privacy browser add-on)

GadgetGuy’s take: Just get me there

Perhaps the real issue should be map coverage, accuracy and the combination of search results on these maps.

Apple had Google Maps until in 2012 when it released Apple Maps. Initial reactions were poor, but that was seven years ago. Google Maps are still one of the App Stores major downloads.

Apple has a focus on clean layout, 2D maps (flat) and Siri voice integration. Apple has a Flyover mode that is useful. Its transit is limited to major capital cities. From what I have seen Apple’s 2D maps are at their most accurate when you get an OS update.

A great litmus test is to ask Uber drivers which map they prefer. Although highly subjective the answer is roughly 35/65 Apple/Google with the latter ahead on navigation.

Google Maps has had criticism over the location history tracking – it knows everywhere you take an Android phone. Apple Maps appear to have less tracking. Storm in a tea-cup – you bet.