Duo 2 – charge and listen to iPhone at the same time 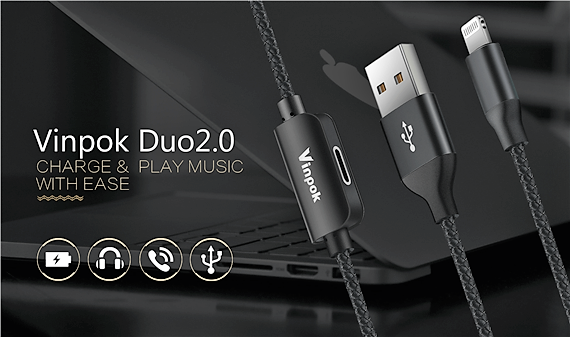 Duo 2 from Vinpok has elegantly solved the Apple iPhone conundrum of charging and using headphones at the same time.

Apple ripped out the 3.5mm audio port in the iPhone 7 much to the annoyance of its users. Instead, it introduced earbuds using a proprietary Lightning connector, but there was one big problem – charging and listening at the same time. This is especially useful for Netflix addicts.

Sure, you can get a clunky adaptor on eBay, but Vinpok felt there had to be a better, more elegant way.

It invented Duo 2, and it solves everything. Vinpok is using an Indiegogo process (crowdfunding) and launched on 21 March. If you sign up now, you will get a 68% discount – just US$19!

Duo 2 was not as easy as splitting the Lightning cable

It had to support things like remote control and handsfree calling. It could not impair Apple’s 24-bit, 48kHz audio transmission.

While they were at it, the design also had to support the use of a lightning to 3.5mm adapter as well. And it needs to support data sync and charge as well.

The design is also robust. The 1.2 cable is covered in a braided nylon fabric so its tangle-free and just the right length too.

We don’t know the price yet – and will update this article when it is announced.