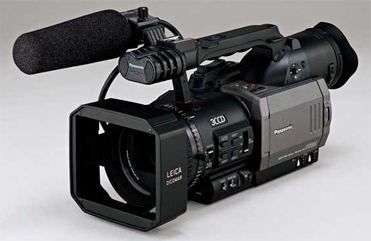 Steve Turner takes a look at the Panasonic DVX100A.

This was the big one before HDV hit the streets and everyone got really confused. The first camera to seriously tackle the film ?look? issue and give filmmakers a very affordable camera. A mate of mine got a couple of shots into the upcoming feature film ?Wolf Creek? and points out the DVX100 was used for a few bits of the film and they?re very happy with the results from this standard miniDV camera. He loves this camera.

The trouble is nearly every time I pick up a new camera I think ?ohh this is nice, wouldn?t mind one of these?. This time was no different. The DVX100A (why can?t they have nice names that roll easily off the tongue?) is very easy to use. The benchmark for me is simply do I have to go to the manual to work it out and here the answer is no.

Most of the switches you need to get to are on the outside so you need to venture into menu land only to set up all your personal preferences which can then go onto preset switches for future use. The film presets are on a rotating switch on the back and that?s a good thing too. Just rotate for the ?look? you?re after and away you go. These presets are adjustable too and you can really go to town experimenting with gamma levels and knee settings and loads of other techo stuff.

In the few minutes I spent doing research, I found a ton of stuff on the internet about how to set up this camera for proper film use. That is real film use – google Panasonic DVX100A to see what I mean. It?s carved a niche for itself as the DV camera of choice for indie (independent) filmmakers wanting to crack the big time. Here you need to supply shorts films as either HD (high definition) or 35mm film. The DVX100A is reportedly very good for transfer to 35mm film with minimal loss as its design is aimed at the film look from the start. On the sound side it?s got proper XLR inputs on the side with phantom power supplied so decent mics can be plugged in. There are wheels to control the sound but I found them slow to get to.

I really think you have to go to real nit-picking to find a fault with the new generation of video cameras so here?s a couple of nits on the DVX100A. The camera?s selling point is its ?film? ability and while this is easy to set up I still find the jitter you see on movement a tad disturbing.

The 16:9 aspect is a mystery. From what I?ve read the reason for not doing true 16:9 is simply to get the camera into a lower price bracket. It does a letterboxed 4:3 version of 16:9, which for video you?d have to enlarge to get proper 16:9 and it would be a tad noisy. The 16:9 here is slightly larger than conventional 35mm aspect and is aimed at getting that right. Shows how much Panasonic are keen to corner this area of the market. I?d never even of thought of that until I read about it on the net.

Perhaps the biggest downfall is that, like the Sony HDV cameras, it?s a big camera to have to hold in front of your face ? you?re going to get tired quickly and steady shots will be hard over a long shoot. Then again if you?re making films then the tripod?s getting a lot of use. There?s a market here though for someone to do an affordable adjustable shoulder gadget to ease the strain of use of these types of camcorders.