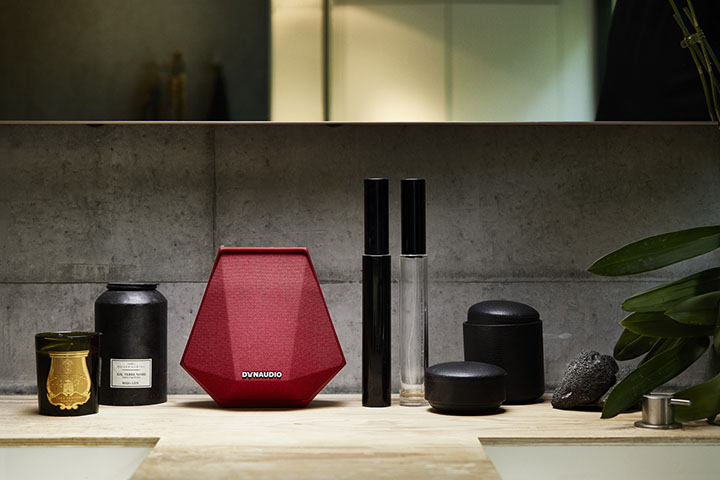 First, though, let’s see what you get with the Dynaudio Music 1. Thematically it’s very similar to the Music 3, although it’s clearly smaller. The height is the same at 220mm, but it’s narrower at 229mm and shallower at 200mm. And it weighs 1.6 kilograms rather than 3.7 kilograms. Part of that difference is due to the power supply being outside the Dynaudio Music 1 rather than built in.

But it still has a battery built in and can run independently of power for more than eight hours.

Speaking of batteries, I had switched off the Dynaudio Music 3 and put it aside after completing the review a month ago. When I pulled it out and plugged it in again weeks later, the battery was virtually full. The unit had retained just about the full charge over that month.

Back to the Dynaudio Music 1: it presumably has a smaller battery because even though it has the same run-time rating, it has less work to do. This speaker is firmly mono, not stereo. It has two 40-watt amplifiers, one each for the 100mm bass/midrange and the 25mm tweeter.

In terms of style, it’s much the same as the Music 3. Check out the photos. It’s available in dark grey, light grey, blue or red. I was sent the red one.

One other difference, it lacks the IR remote provided with the Music 3. I tried the 3’s remote on the Dynaudio Music 1. It didn’t work, so I guess it doesn’t even have the sensor for the remote.

Like the Music 3, the Dynaudio Music 1 has a 3.5mm analogue input and a USB connection. You can plug an iOS device into the USB socket to feed it music. Note, the iOS needs to be reasonably up to date. It worked with the iOS 9.x on my old iPad Mini, but not with the iOS 6.x of my old iPod Touch. It does not work with iPod Classic or Nano devices, nor of course with any Android devices.

But the Dynaudio Music 1 also supports Apple Airplay so I could feed music to it that way with an iPhone, the old iPad Mini. Or, indeed, the old iPod Touch, although I had to google how to use Airplay on iOS 6.

Alternatively, you can just use the USB socket to power some other device (eg. a Chromecast Audio, iPod Classic) which is plugged into the analogue input.

As you will deduce from the reference to Airplay, the Dynaudio Music 1 of course connects wirelessly.  That can be via Bluetooth or the network. It is comfortable with the 2.4GHz and 5GHz Wi-Fi bands. There is no Ethernet port, so Wi-Fi it is.

As for Bluetooth, the unit supports the aptX codec for higher quality music transmission.

You use the Dynaudio Music app to connect the Dynaudio Music 1 to the network. This took a couple of goes, but persistence paid off. Did I mention that both speakers have built-in web pages by which you can see information about them, make certain network settings and update their firmware?

I paid a bit more attention this time around to the Spotify situation. As I thought I’d seen on the Music 3, the Dynaudio Music 1 initially supported Spotify Connect. That was with firmware 0. Of course, one should keep one’s devices firmware up to date. After the app had done that it was firmware 49 and Spotify Connect no longer worked. I’m told there’s some basic chip-level incompatibility so it won’t be coming.

I caved and bought myself a subscription to TIDAL, the only streaming service – apart from Internet radio stations – available to these Dynaudio systems. It was well-integrated into the Dynaudio Music app and worked well, except for its penchant for inserting a significant gap between tracks. Most of the time that doesn’t matter, but when I was listing to Tommy by The Who, where a lot of tracks run on with each other, it was a bit irritating.

Listening to the Dynaudio Music 1

The sound produced by the Dynaudio Music 1 is ridiculous. By that I mean ridiculously good. Yes, it truly belies its size. The tonal balance is sensible and tuneful. Treble isn’t emphasised but kept in check with the mids and bass. Dynaudio’s characteristic dynamism, especially with drums, is retained. And the bass is remarkably extended. There’s a real sense of kick drum and pretty much all the musically significant bass guitar on the great majority of tracks is delivered.

Of course, part of this is due to DSP tricks. I’m pretty sure that the level of bass is adjusted depending on playback level. That way the Dynaudio Music 1 doesn’t over drive things, which would simply produce distortion and may do damage. But at low to moderate levels, it keeps bass in balance.

It didn’t go quite as comfortably loud as the Music 3, but as I’m typing this the speaker is on a stand about three metres from me, blasting out “Shoot to Thrill” from AC/DC’s album Back in Black, which is streaming from TIDAL. The volume level is at 95% and it really is quite loud, but distortion is constrained to tolerable levels. The power drumming near the end of the track was missing its deep heft, held back a little by the DSP processing. But that was the only real omission.

Apart from it being mono, of course. I’ll return to that in a moment.

I measured the output of the bass at various levels with the microphone placed right in front of the bass/midrange driver. I was gratified to see that my listening impressions were pretty much confirmed. At low to moderate volume levels, the bass extended solidly down to 45 hertz, remaining even all the way down from 300 hertz. Below 45 hertz it fell away very rapidly to be down by 10dB at 40 hertz.

But at maximum volume, the lower reaches – below 120 hertz, were pushed down by 3dB compared to the upper bass. That’s perhaps the work of a DSP, although it may be the acoustic suspension kicking in.

I can confirm that you can run music separately to the two speakers – even TIDAL music. Apparently, a basic subscription allows two streams at once through the Dynaudio Music app.

Initially I found the organisation of the app a little unwieldy for this function. I suspect that it would work best if you have the app running on a separate device for each zone, but it can be done reasonably well with one app if done the right way.

Basically, you select the music you want, hit play and then the app asks you which speaker (or group) that you want to music to play through. The best thing then is to get out of the music page of the app and stay on the speakers page. Then you can simply select the speaker you want to control with a tap. Then you tap the “Playing” section at the bottom to bring up the control page for that speaker, and you can adjust volume, play and pause and so on. Down arrow then back arrow and you’re ready to select a different speaker.

It’s on that same speaker page that you can group speakers. You might want all your Dynaudio Music speakers throughout the house to play the same thing, so you just join them all together into one named group and treat that as a speaker. They are joined by dragging the icons for each one into one circle on the app.

A special kind of group is a stereo pair. In this case you drag one of the speakers into the left circle and one into the right.

In both cases, I could not get the app to do the grouping with my Android phone (Huawei P30 Pro). When I started dragging a speaker icon, the page would go grey and I’d be dumped back in the previous page. However, it worked fine on an iPhone.

Both grouping modes did a good job of music delivery. I particularly liked the stereo setup … Dynaudio is unusual in allowing two different speaker models to be stereo-paired. But it speaks to their quality that the did a quite good job in stereo mode, despite being somewhat different.

Dynaudio makes first class speakers. And apparently that extends even to its compact, smart lineup. I love Dynaudio speaker sound. If you can live without Spotify, and especially if you’re an Apple home with iOS devices for Airplay, the Dynaudio Music 1 and the Music 3, and I expect the Music 5 and Music 7 are well worth checking out.

You can read more about the Dynaudio Music 3 at the company site here.

Features
Value for money
Performance
Ease of use
Design
4.4