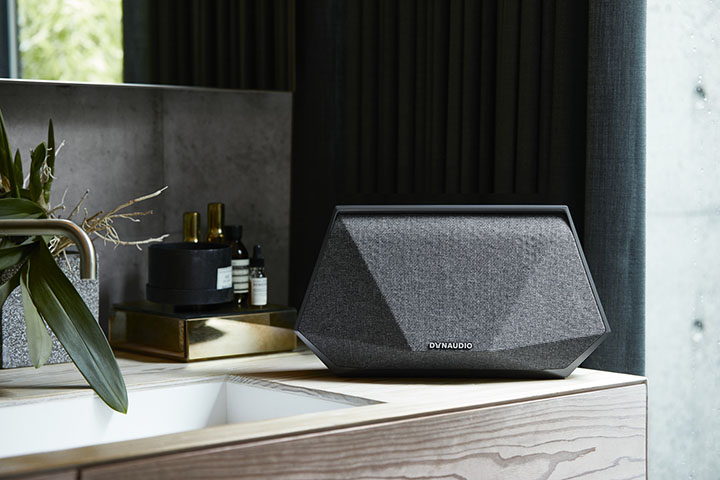 One of the very first sound systems I wrote about professionally, many years ago, was installed in a superb recording studio. The loudspeakers they used were from the Danish company Dynaudio. Over the years I’ve remained impressed by its home offerings, mostly amazing high-fidelity loudspeakers. But like so many others, it is now venturing into compact, multiroom speakers. Here I look at the second-from-the-bottom unit, the Dynaudio Music 3.

There are four models in the range: 1, 3, 5 and 7. I shall be returning in the near future to the Dynaudio Music 1. And to seeing how it and the Dynaudio Music 3 work together. But for now, I’m restricting myself to the larger speaker.

Before getting to its details, I should note that a good ten years ago we recommended a Dynaudio car speaker system as part of our Christmas Gift Guide. Unfortunately, it cost two million dollars … probably because it was the in-car audio system for the Bugatti Veyron Grand Sport. It seems I’m not the only one to like Dynaudio.

The Dynaudio Music 3 is a mid-sized standalone speaker with Bluetooth, Wi-Fi and a built-in battery that gives it up to eight hours of independence from your home’s power.

I won’t try to describe the diamond-like shape. The pictures do a better job. Mid-sized: it measures 405mm wide, 220mm tall and 174mm deep and it weighs 3.7 kilograms. It has a tweedy cloth front and back in dark grey, blue, red or light grey. A metal strap runs up the sides, over the top and along the bottom. On the top of that are play/pause, skip, volume and input buttons. LEDs on the top show the volume level and the selected input, and also the chosen preset if relevant. At the bottom right, largely hidden away, is the power button.

Inside, the Dynaudio Music 3 has three drivers. Bass is handled by a 5 inch – 125mm – woofer and two 25mm tweeters. Each driver has its own 40-watt amplifier. The enclosure uses closed box design principles. That means, no bass reflex port, no passive radiator. There are pros and cons of such a design. It makes it harder for the woofer to produce deep bass, but also better controls it. With an active speaker such as the Dynaudio Music 3, more power and some digital signal processing can overcome that.

Dynaudio seems to have done that. It specifies the frequency response of the Dynaudio Music 3 at 47 to 20,000 hertz at the -3dB points. It also says that the THD – Total Harmonic Distortion – is less than 0.3%, although I suspect that rating is for the amplifiers, not for the drivers.

There’s a 3.5mm auxiliary input and a USB socket. That socket can be used to power a device or you can feed music directly to the unit from an iOS device. One likely use, as we’ll see, is a Chromecast Audio device.

As is the way of these things, you use an to set up the speaker. That app is Dynaudio Music. Install it, fire it up, follow the instructions and it talks you through providing the Dynaudio Music 3 with the password of your Wi-Fi access point. In fact, it recognised all three of the access points in my office, including both the 2.4GHz-only and the 5GHz-only points. That confirms that the system is dual band.

It took a couple of goes for the connection system to work. The first couple of times, after entering the password the app came back and said, “It looks like your speaker is no longer in setup mode. Do you want to try again?” I tapped “Yes”, then realised that the speaker seemed to have switched itself off, so it no longer had the usual flashing Wi-Fi light. The next time it asked the same question, so I tapped “No” and the app said, “That’s it! You’re all set.” But it turned out I wasn’t all set. The app couldn’t find the speaker and I noticed the Wi-Fi setup light was still flashing.

Third time lucky: “Your speaker is now on the Wi-Fi network ‘[REDACTED]’ and ready to use.”

The Dynaudio Music app is somewhat of a strange thing. It provides access to music, after a fashion, but nowhere near the full range of it. The first time I fired it up, it asked me which artists I like, offering a list. As I ticked some, it added more. After a couple of dozen, I indicated I’d finished. At some point in there it asked if I’d like an impressively generous nine-month free trial on Tidal. But I generally use Spotify, so I chose “Later”. Then it asked if I wanted to connect to a music service. I agreed, and it offered “Tidal” as the only option. Which I rejected.

Then it went into the “Music Now” page, showing some of the artists I’d previously ticked. I tapped on one to play it, but the app told me I had to link my Dynaudio account to Tidal in order to play the music. Oh, there were radio stations I could dial into (the app uses the vTuner portal). But that was it, Internet radio stations or Tidal.

What it couldn’t do in the app was apply any other music streaming service such as Deezer or Spotify, nor could the app stream music from my DLNA-enabled NAS. Nor, for that matter, could it stream music wirelessly from the phone itself. To play that I has to use Bluetooth and some other music-player app. Hmmpphhh!

No matter, really, it just meant using my preferred apps. For DLNA and local music I used BubbleUPnP. For Spotify I used the Spotify app. Both apps found the speaker readily enough and happily fed music to it.

A couple of hour later I went to play some music on the Dynaudio Music 3 from Spotify. But I couldn’t find it as an available speaker in the app. That was weird because it had been there earlier. I went to my Android tablet instead. Same problem. How about an iPhone? Or the Spotify app on my Windows computer? Nope, neither of them listed it either. I did a hardware reset on the Dynaudio Music 3 and set it up again. (This time it connected to the network first time without any of the wobbles.) Still no Spotify.

So, I went googling and found that apparently Dynaudio lost Spotify Connect support quite some while back. Why? I don’t know.

Now, I’d earlier found the Dynaudio Music 3 shown in the Spotify app. Indeed, I’d briefly streamed music to it from Spotify for a few seconds to make sure it worked. What had changed?

Well, after I’d been playing with the Dynaudio Music app awhile, it informed me that there was a firmware update available for the speaker. I accepted its offer to perform the update, so the app downloaded the update and installed it on the speaker. That took it from a reported firmware version of “0” to “v54”. I’m guessing that one of the things that the firmware fixes is reporting of the firmware number. And that it also removes Spotify Connect.

I decided I might as well use the Tidal trial, but since I’ve previously trialled Tidal it was apparently no available to me. I’m not prepared to switch over to Tidal from Spotify because just about everything else I review is Spotify-compatible, and much isn’t Tidal-compatible. So, I plugged in a Chromecast Audio and used that when I need Spotify.

The app does manage the multiroom thing. I’ll return to that when I look at the Dynaudio Music 1 system in the near future. It also allows one to select inputs – Bluetooth, Auxiliary, Wi-Fi, USB – and manage preset radio stations. And you can control some of the speaker functions, such as switch NoiseAdapt and RoomAdapt on and off, choose the Music, Movie or Speech EQ (there’s no “Flat” setting) or adjust the bass and treble controls. I left everything neutral for this review.

The app on an iPhone is operationally and functionally identical. But the iPhone does have one advantage with the Dynaudio Music 3: the speaker supports Apple AirPlay. So, you don’t have to resort to Bluetooth with an iPhone.

The Dynaudio Music 3 also comes with a remote control that duplicates the control keys on top of the unit.

I did a wide range of listening using a wide range of music, mostly feeding DLNA music from the extensive collection on my NAS. But I should note Bluetooth also worked well, as did the auxiliary input. As did Airplay from an iPhone. My old Pixel 2 phone reported that the speaker supported aptX for higher quality sound.

Right now, as I type this, Ed Sheeran’s album X is blasting out at a high-enough level to completely fill my office with good quality music. The bass is easily followable and the drum has a nice bit of punch. Note, I’m sitting four metres from the speaker. I really am talking about the results within the whole of the room, not sitting right on top of the Dynaudio Music 3.

The results were similar regardless of genre. Led Zeppelin’s Houses of the Holy was on my playlist before Ed, and again the results were impressive. The speaker easily out-produced quality sound compared to any similar-sized speaker that I’ve used.

It operated reliably and maintained a good Wi-Fi connection. I also fed it high resolution audio, up to 24 bits and 96kHz sampling, and it worked properly with all of that.

I plugged the iPhone into the USB socket and then I was able to play music through the Dynaudio using the iPhone’s own music app. I also tried an iPod Nano – I still have a couple of those – and it worked, but it just played music in order. I had no track control.

Well, yes. Remember the built-in battery? Being able to feed the music via wire is great for party time at the park. No, the speaker isn’t water-proof, so use it with care. But it’s loud enough to do good party work.

It’s notoriously difficult to measure the performance of loudspeakers. The results tend to be extremely misleading. However one thing that can be instructive is bass extension: how deep the bass actually goes. As I noted, Dynaudio says that the speaker goes down to 47 hertz at the -3dB point. That would be impressive for such a compact loudspeaker.

I measured it with a microphone up very close to where I think the bass driver is located (there’s a hard grille under the cloth, so it can’t be found by touch). The peak bass output turned out to be between 52 and 57 hertz. The bass output was essentially within a 3-decibel band from 51 hertz to 240 hertz. Would that some expensive bookshelf speakers could manage that!

And 47 hertz? Yes, three decibels below the average of that bass band. Indeed, the -3dB point was at 45.5 hertz.

The Dynaudio Music 3 is a very good, fine sounding all-round Wi-Fi and Bluetooth speaker. It has the added bonus of offering a degree of portability. But keep in mind its limitation. If you’re committed to Spotify, this one won’t suit you unless you’re prepared to add something like a Chromecast Audio.

You can read more about the Dynaudio Music 3 at the company site here.