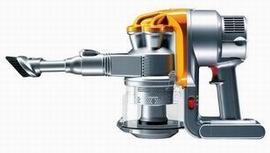 After 22 months research and development, Dyson has announced a handheld bagless vacuum cleaner, the DC16, that is claimed to deliver constant suction.

Available from February, Dyson says that the DC16 ($299 RRP), which looks more like an electric drill than the handheld units weeve come to know for spot cleaning, has twice the suction power of other handhelds in use.

Dyson has miniaturised its multi cyclone technology, radix, that is already used in full-sized Dyson machines, which is designed to remove dirt and debris from the air so it doesn’t clog or lose suction. Much of the performance of the DC16 handheld vacuum cleaner is made possible by its lithium ion battery which supplies 21.6 volts of power.

The DC16 has trigger operated cleaning, just like an electric drill. A three stage LED indicates battery charge levels and after six minutes, when a red LED is lit up, the handheld vacuum cleaner simply stops operating. The unit is charged via a docking station that is wall mountable and charging time is three hours.

It has a double-action swivel tool, which when retracted, acts as a handy dirt brush, and when extended becomes a crevice tool. In addition, it has an accessory adapter that makes it compatible with other Dyson vacuum cleaning accessories. Finally, the DC16 has lifetime washable filters that never need replacing.