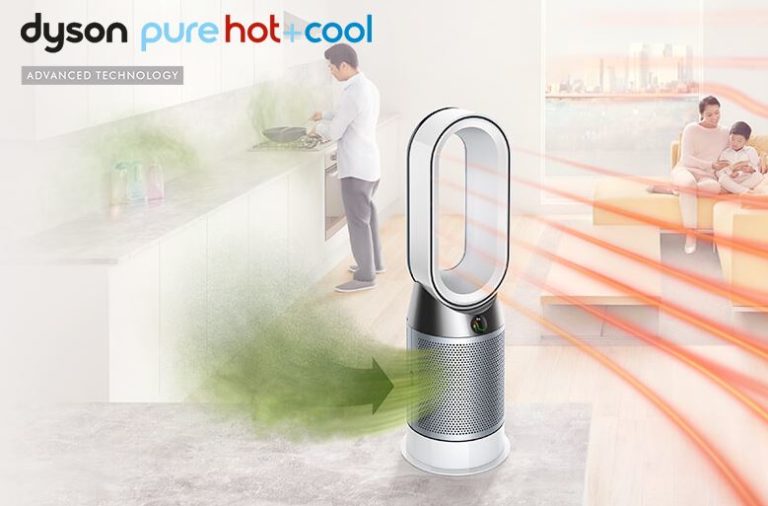 The Dyson HP04 Pure Hot+Cool purifier/fan/heater is three devices wrapped into one. Its claim to fame is the purification mechanism that not only traps 99.95% allergens like dust and pollen but volatile organic compounds (VOC), petrol/diesel fumes (NO2) and those that emanate from flatpack furniture and cleaning products.

We put the Dyson HP04 Pure Hot+Cool purifier/fan/heater through its paces and see how it justifies the premium $899 price tag – not to mention the $100 each year or so to replace the filters. Dyson is, as always, an investment in a premium product, and it sells heaps.

A typical fan pulls air from behind it into the blades and expels it at the velocity (speed setting) you select. It is a one-way airflow, e.g. X litres of air-per-minute in and then the same X litres out.

Dyson uses an ‘air multiplier’ effect that can increase the output (not input) efficiency by up to 10 times.

Dyson scientists and engineers have very effectively harnessed the Coandă effect named after  Romanian aerodynamics pioneer Henri Coanda. Simply put Dyson ‘bladeless’ fans blow the air out over a curved surface, and it takes the surrounding lower pressure air with it air output. For one litre sucked in can pick up to nine extra litres of surrounding air to push out.

Dyson HP04 Pure hot+cool advertise 290 litres/second airflow. We know that is the air output, including the Coanda effect (Air Multiplier) at a maximum fan speed of 10. We can safely assume on fan speeds of 1-5 the efficiency is 1-5X etc.

What Dyson do not state is the actual air intake – volume sucked into the purifier in cubic feet or metres per minute – or CADR. This is useful to compare it with other purifiers that state CADR and helps to select the right size purifier for the room size.

Our guesstimate was about 29 litres-per-second (lps) using Dyson’s stated 10X multiplier effect. But the previous model (similar design specs) states a CADR of 60 cubic feet per minute or 1.688 cubic metres per minute. And guess what – that is 28.32lps or in CADR terms about 100m3 per hour!

Now many Aussie home have high or vaulted ceilings and large open space living areas. These have no confined area, so purification, heating or cooling is far more problematic as air can flow in from elsewhere including open windows, doors etc.

If you place the Dyson in that small confined bedroom (21,600 litres@29lps) air would turn over every 12.5 minutes. But you will not run the fan on 10 because it is a little noisy in a small space so using linear assumptions:

How many times do you need to turn over the air to purify it?

Air Change Rate (ACR) does not specifically relate to purification but to air coming in from outside to inside keep the home well oxygenated. That air can contain pollutants like pollen and noxious gasses.

Dyson’s role is to help purify the air once it is inside the ‘designated area’ and also to remove impurities emanating from inside – cooking fumes, furniture polish etc.

The Dyson at 100m3 CADR (maximum) will evenly purify and heat the bedroom quite well even if the fan were set too much lower speeds overnight.

But as home spaces grow larger or more open-plan, Dyson relies on creating a micro-climate zone and just purifying or heating that rather than the whole area.

But wait there is more

We are not knocking Dyson but educating readers that there is a difference between CADR rating and Dyson airflow. Dyson is one of the few devices that can create a micro-climate zone (using the Coanda effect) within an overall larger space and in our book that makes it far more energy effective than a larger fan or heater or using reverse-cycle AC.

I like that you can adjust the air oscillation direction to create a defined zone from 0-350° or user-definable in between. It has up to a 40° tilt.

And for those that do not want any perceptible airflow, it has a diffused mode that turns the air backwards for gentle purification.

You do not need the app, but it can be handy for remote access and to see weather and air conditions. Note: Dyson does not sell the information, so there is less need to be paranoid.

We reviewed that here in February 2018 – it scored 4.4-out-of-5. To be fair to Dyson, it was not long after I started at GadgetGuy. I did not have the reviewing expertise or test tools that I have today. Never-the-less it was accurate. Our only issue then was the apparent eye-watering price, not only of it but all Dyson products.

Well, time has passed, and as I get wiser, I appreciate the Dyson formula.

And we do not comment on price as that depends on what the market is prepared to pay. It appears that there is a market segment that drives Rollers and wants Dyson. Don’t we all ascribe to that?

It is not this review’s purpose to justify air purification. There can be health benefits in removing air born dust, particles and gasses. If this is your primary need, then there are many brands of dedicated purifiers (some with humidifiers) that may meet your needs at a lower cost than a 3-in-1 device like the Dyson.

The Dyson HEPA filter removes 99.95% of allergens and pollutants down to .1 microns (that is almost perfect). Its activated carbon filter also removes gasses like formaldehyde, benzene and NO2. These figures meet or exceed asthma or hay fever recommendations.

If you buy the Dyson, you must accept that it will need regular replacement of the 360° borosilicate glass microfiber HEPA (High-Efficiency Particulate Air) filter at $55 and the inner activated carbon filter at $55 when the machine/app tells you. Dyson suggests every 12 months based on 12 hours a day (4300 hours). I suspect that the average Aussie will probably get far longer out of it unless you leave it on the purifier only setting that is always on.

This is a trade-off – the safety of no blades and the Coanda effect or an outright gale.

Several, less erudite bloggers have complained that they cannot feel the ‘wind in their face’ from a Dyson – poor, illiterate souls. Dyson creates a micro-climate in a defined zone bathing you in pleasant, clean, heated or room temperature air.

Contrary to advertising, no fan cools. It blows air on your body and in doing so helps to evaporate sweat making you feel a little cooler.

As Dyson is not ‘blowy’, it does not feel cooler – perhaps a degree or so. But it is very efficient at air circulation in the micro-climate and will circulate air more efficiently so that ground level cooler air replaces hotter air (which rises).

If you want true cooling, get an air-conditioner and a wealthy benefactor to pay for it.

We ran two tests using our EmberIQ metre we can measure energy use in kilowatts per hour and cost.

Depending on fan speed, temperature setting and oscillation, it can raise temperatures inside a micro-zone of approx. 4 x 5 x 2.4m ceiling (50m2) to 20-22° – a 3-5° increase. The temperature is warmest in a cone shape from the unit and drops off around the edges.

This is great to keep the bedroom at the ideal sleeping temperature after it reaches the target temperature. Interestingly the wattage initially only drops to 1900W until it reaches the desired temperature. Then it plummets to 3W until it needs to fire up again. The spikes below between 00:00 and 09:00 show it cycling up and down before the bigger spike at around 07:30 when it needs to work harder to keep the bedroom at 19° after we opened the main and bathroom doors. Energy use overnight on off-peak rates is negligible and ensures a constant temperature in a closed room.

It is easy and quick to get a micro-climate zone to the desired temperature 20-22° – 20 minutes at worst.

If your need is ‘hot’ or to cover larger spaces, then you need to look at fan-assisted space heaters or reverse cycle air-conditioning.

There is no doubt that, as with all Dyson products, there is a truckload of science behind it. I tried to explain some of that because otherwise, all you would see is the price.

As this is a three-in-one device, and we rate it with convenience at the forefront.

You can buy separate fans, heaters and purifiers (like the Philips range) that may have more capacity.

There are very few combos that can match the Dyson. If you want to spend less and sacrifice some purification, we recommend the De’Longhi HFX85W20C (review here).

Features
9
Value for money
8
Performance
8
Ease of Use
10
Design
10
Positives
You can simply plug and play or use the app for extra functionality
Dyson quality - its a keeper
Elegant, safe bladeless design
App for remote control and climate stats
Perfect for apartments and smaller areas
Negatives
Not for larger open space designs unless you are happy with a micro-climate
9