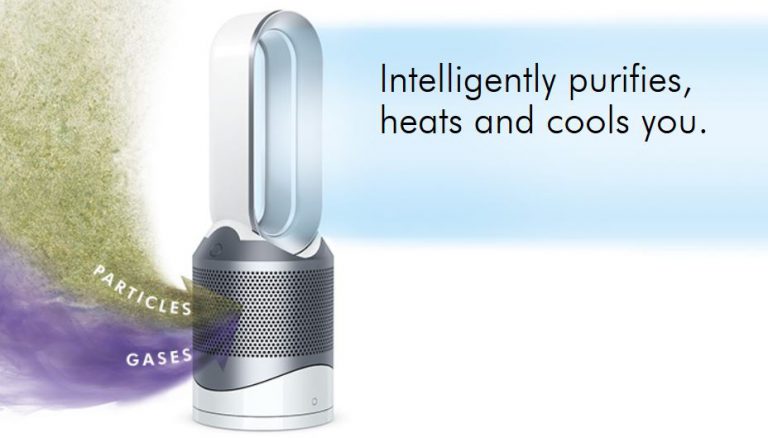 Dyson’s Pure Hot and Cool Link is a fan with heating, air purifying and an app. Its claim to fame is that it captures 99.95% of airborne allergens and pollutants.

GadgetGuy has been reviewing the fan for the past few weeks and like everything Dyson can report that it meets or exceeds expectations for design and build.

But there are a few things you need to know before investing A$799 for this device.

Before we kick off let’s get one thing straight – fans do not cool air. They help to distribute air around a room (hot air rises and cool air falls) and in blowing air over you may produce a slight cooling effect if you are sweating.

To labour the point if it is hot all they do is blow that very same hot air, and you need to think more closely about your cooling needs. For example, do you need air conditioning (portable, split system or ducted), evaporative/personal cooling, or will a fan suffice?

On the other hand, this fan has two differentiating features

The air we breathe contains microscopic particles of dust, allergens, pollen, gasses and more. On the whole, Australia has clean air compared to Beijing and other places where cars and coal burning power stations are prevalent.

As the larger particles settle out of the air in your home, you see this in the form of dust on tables. These are a mere annoyance – the smaller ones do the damage via hay fever, itchy eyes and allergy.

Dyson’s purifier uses a Glass HEPA borosilicate microfibre that traps particles down to 1.0 micron. It also uses activated graphite (carbon) to absorb gasses other than “air”.

The A$99 filter needs to be changed when it is full. The app tells you when – typically every 4,300 hours or less if you are in a dirty air environment.

But there is a slight catch you need to be aware of. It only cleans the air that it sucks through the filter. That is fine in an enclosed space with windows and doors shut – eventually, it will have sucked all the air in the room through the filter.

But if you open the window or door or are in a large open space it cannot suck enough air to clean it all.

As a purifier, it is useful although dedicated purifiers (not a fan or heater) like the Inovaair AirClean A7 at $595 cleans down to .3 microns and has a longer three-to-five year filter life for $130.

As a filter/purifier for medical reasons, there are better, dedicated air purifiers at a lesser cost.

You cannot say that Dyson is noisy – it won’t drown out a TV or conversation. But at night when you want to sleep it is noticeable on settings over 6/10.

We tested noise at 2m (typical distance from a bed) and a 30cm (in front). The ambient noise in the room was 36dB (just below a quiet library level).

Where a blade fan has a harsher cutting/blowing noise, this is more a ‘whoosh’.

My wife says we needed setting ten to ‘feel the air’ but settled for setting six as it was quieter. My take – it is not as harsh as a blade fan, but it is noisy.

Dyson wins in the quietness stakes although not by much.

The air intake is measured by litres per second – the speed at which air is sucked through the filter.

In an article about Dyson collaborating with China’s Household Appliance Standard and Technology Industry Alliance it says of its Pure Heat and Cool “With our Air Amplifier technology, we can deliver at least 200 litres of cleaner air every second to clean every corner.”

But in an advertisement for its larger, round hoop, AM06 fan, it states, “Dyson Air Multiplier™ fans use an energy-efficient brushless motor to draw in up to 27 litres of air per second.”

The apparent disparity is that while it may only draw in up to 27 litres/second using its Air Multiplier technology, it can output using something called the Coanda effect, the equivalent of 200 litres/second over a smaller compressed area. We could not test that.

Dyson has an air input typical to similar bladed fans.

I tested it against an Omega oscillating column/tower fan and a pedestal fan with two smaller blades.

The two-blade fan could blow papers off the table at its maximum setting at 2m. At 52dB it was noisier than the Dyson at 46dB.

The tower fan produced more noticeable air velocity at a greater distance with less turbulence. At its maximum setting, it was 48dB. I felt it was best for larger spaces like a lounge room.

The Dyson did not produce the volume of air that the other two did.

As a fan, there are better and lower cost options especially if raw litres/second output is the criteria.

A heater needs to be able to raise the temperature of a 27m3 room by up to 10° over an acceptable period. So, if the ambient temperature is a chilly 15°, it should be able to get up to 25° in let’s say 30 minutes.

It was too hot in Summer in Sydney to try any real heating tests, but we sweated it out anyway.

All measurements were by our trusty Kestrel Drop wireless environmental data logger.

The air temperature at the fan was 47°, but it lost its perceived heating effect a metre away. If you had it close by you would feel warmer, and in a closed bedroom, it should be able to maintain 22° if the ambient temperature outside is 15° or more.

Most Australians pay around 25-30 cents per kilowatt-hour – that is a 1000 Watts used for an hour.

In fan mode, at maximum speed, Dyson’s power consumption is 44 watts about seven cents per hour.

However, a typical reverse-cycle air conditioning is about 25 cents an hour for heating and 60 cents for cooling (source Canstar Blue). We repeat that you need to look holistically at your heating and cooling needs.

Few fans have an app although I suspect that all new home devices will be smart soon. You do not need the app for normal fan/purify/heat operation.

The device connects via Wi-Fi to your home network enabling you to activate, schedule and monitor at home or away.

The app helps to monitor the air quality presumably via some magic in the Dyson cloud and referencing your location. It also tells you when its time to change the filters (based on hours). There is also a setting for continuous monitoring which keeps the fan in idle mode and turns on the sample the air at set intervals.

It also mimics the remote control.

As a fan, its air volume is eclipsed by several tower and multi-blade fans, but given the bladeless design, it is safer around children and a little quieter.

As a heater, it is marginally more efficient than comparable fan/heater.

As a purifier, it cleans air down to 1 micron but there are others that clean down to .3 microns and cost a lot less to replace activated charcoal/HEPA filters.

But when you combine those functions – the whole is greater than the sum of its parts – it becomes a unique device and is fit for purpose.

And let’s face it – you join the clan of Dyson because money is not an issue, you want something just a little different, and it works.

$799 from Dyson online or at major retailers.

The conundrum here is do you rate it as a fan, heater, purifier or all three. We have chosen the latter, and as it is a relatively unique category, it rates well.