Dyson puts the wind up the woodwind section 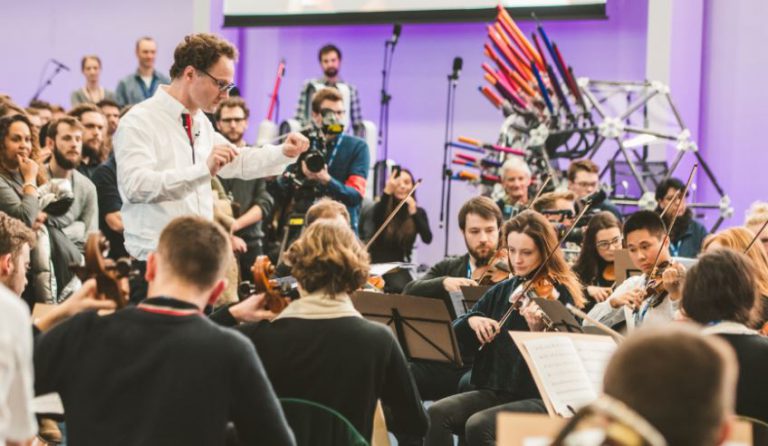 A team of more than 50 of Dyson’s acoustic engineers have joined forces with musician David Roche to bring together an orchestra (Orion Orchestra) accompanied by the latest Dyson technologies; including the Dyson Digital Motor, the V8 Cord free vacuum and the Dyson Pure Cool link fan.

The world premiere is this Sunday direct from the 950 seat Cadogan Hall in London best known as the residence of the Royal Philharmonic Orchestra.

The concept and brief emerged after a conversation between Sir James Dyson and the Orion Orchestra’s Artistic Director, Toby Purser.

Purser said, “The initial concept was two Dyson Supersonics performing a duet accompanied by an orchestra, but thanks to the astounding knowledge and enthusiasm of Dyson engineers, it rapidly evolved into a piece that combines science and sound – fusing classical music and Dyson technologies together.”

Roche uses six Dyson digital motors and controls the pitch and tone of each, achieving musical tones. He also uses V8 cordless vacuum bins with ball bearings to create an intense noise and plays the airflow from Dyson Cool Link fans off the chimes to create sounds.

David Roche, “At its core, Acoustical Anatomy is about change. This is a common ground between so many of us – not just musicians and engineers.”

Dyson has an in-house team of 43 acoustic engineers and five specially designed semi-anechoic chambers across its development centres in Malmesbury, Singapore and Malaysia.

Dyson acousticians do not just study the volume of sound, but its tonality and pitch to ensure that Dyson machines are pleasing to the ear. David spent time with the team to understand the science behind manipulating such sounds. Dyson can analyse sounds as quiet as a whisper, right up to 130 dB – equivalent to the roar of a jet engine.

For the technical minded here is a list of the instruments – is that vacuuments?

To complement the orchestra and Dyson machines, Dyson engineers were challenged to develop new instruments.  The brief: Create an instrument inspired by Dyson technology which is playable and expressive.

Dyson Engineers have spent over 600 hours of their own time creating music machines within the walls of Dyson’s Research Design and Development Centre in Malmesbury.

David Roche incorporated Cyclophone and Amp-sichord to feature in Acoustical Anatomy. All of the Music Machines will be on display at the Cadogan Hall on the night of the performance.

An organ with 48 open flue pipes made from V8 cordless vacuums. Air is blown into the pipes by Dyson Air Multiplier fans and V9 Dyson digital motors. The ranks of sound are switched on and off with electronic switches, and a controller keyboard sends MIDI data to all ranks at the same time. The structure of the machine is made from leftover parts of V8 wands that form a geodesic surface.

Amp-sichord is an array of string instruments inspired by an acoustic guitar and a harpsichord. 36 motors have been engineered to pluck the strings, to form a harmonious collection of notes, playable with a normal piano keyboard. They have been built into Dyson Air Multiplier™ fans which act as resonance chambers. There are over 10 metres of guitar string within the machine.

The instrument is based around the shape of a guitar, assembled on a Dyson V6 wand. The shell of a Dyson purifier acts as a resonance chamber and contains a Raspberry Pi device that drives a V6 motor. The output signal sounds a bit like an analogue synthesiser’s, with the frequency of the pitch being controlled through movement.

The music machine is a violin made up of Dyson parts. The body is a Dyson Airlade V with a cordless vacuum wand for the neck, and an upright vacuum cleaner handle for the scroll. Additional parts, such as the bridge, tailpiece, and fingerboard have all been designed by Dyson engineers and laser cut. It has been fitted with four strings and engineered to withstand the mechanical stress that all the components are put under.

Constructed by a team of Dyson’s first cohort of undergraduate engineers, the machine uses telescopic wands from vacuum cleaners to build a pentatonic (5-note) scale. The pitch is controlled by a paddle, and push buttons activate other notes and sounds.

Based on a modular synthesiser, the music machine uses Dyson Digital Motors as oscillators and airflow as the main sound source, using over 20 separate sockets for passing audio.