e-scooters and e-skateboards may be illegal – huge fines 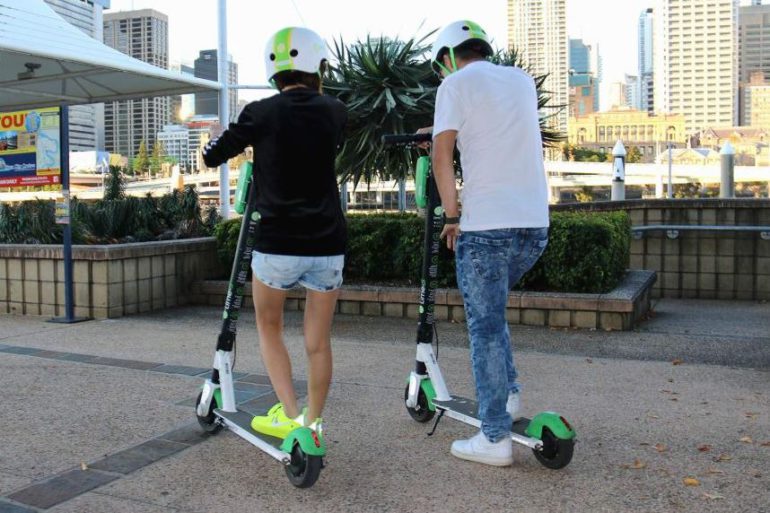 The Christmas craze is e-scooters and e-skateboards. The problem is that their use on public footpaths, bikeways, parks, and public places may be ILLEGAL in most Australian States and Territories.

Yet, you can walk into JB Hi-Fi (and many other stores) and select from a range of models from Xiaomi, Segway, HIMO and Razor ranging in price from $399 to $1099. Or powered unicycles, skates and skateboards from $359 to $2099.

But you say there are electric Lime hire scooters in Brisbane and elsewhere. Yes, there are e-scooter trials in some CBD areas. Lime et al., are not magnanimous – these trials are costly, and at best will legalise ‘hire’ scooters for use at designated speeds, under tight controls, and in defined locations that will not be a danger to pedestrians.

If in doubt Infrastructure Australia has all the powered vehicle definitions here. A motorised wheeled device ads power to a device normally powered by human effort.

A wheeled toy, e.g., a child’s pedal car, scooter, tricycle, or similar toy used by a child under 12 may have a <200W electric motor and cannot exceed 10kph. The emphasis here is the motor can only assist human power – not be the sole source of motion. Many e-scooter companies are taking this to mean these items below are allowed – they are WRONG.

Some limited access to roads is permitted but only in specific circumstances. For example, you can use your rideable to cross a road or avoid an obstruction on a path for up to 50m.

You are allowed to stay on your personal mobility device to cross a road at a designated crossing.

You can also ride on local streets, where it is safe to do so. A local street is a road with a speed limit of 50km/h or less. It must have no dividing line or median strip and if it is a one-way road, it can’t have more than one lane.

You must not ride on main roads or streets in the Brisbane CBD.

e-Bikes are the exception and can have up to 200W motor. They must be pedal-only up to 6kph (no motor assist), and the motor must cut out at 25kph. Specialist ‘Pedalec’ devices can have up to a 250W motor and must prominently display a permanent marketing – Power Assisted Pedal Cycles (EN15194).

Lime and Neuron that are paying handsomely for e-scooter trials.

This Queensland Government statement says it all

Brisbane CBD Queensland has the most liberal e-scooter trial with a 25kph speed limit (same as electric bikes), but a spate of accidents has sparked outrage and calls to limit this to 10kph or less around pedestrians.

You can read an ABC report on a Brisbane death here.

According to Budget Direct Insurance, Lime’s trial license has been on thin ice several times due to a high accident ratio for riders and pedestrians. The trade off will likely be a maximum 10kph speed around pedestrians.

The NSW Road Rule 240(2)(c) specifically prohibits a person from travelling in or on a motorised wheeled recreational device on a road or public place. These include any device that wholly or partly assisted by means other than human power.

No powered device except approved eBikes can be ridden anywhere except private property.

If caught, there are huge fines and the vehicle is confiscated. The penalties are issued cumulatively for several offences.

Brisbane Times reports Elliot Sen bought his e-scooter after riding one in Brisbane.

Mr Sen was keen for his first commute from the inner west to Darling Harbour, saving 20 minutes and avoiding packed trams, but his fun lasted 10 minutes before getting slapped with five fines totalling $2550.

“I was riding on the footpath – given that it’s either the road or the footpath, that made more sense,” he said.

Lime trials at Monash University campus of e-Scooters were initially at 10kph and later at 25kph to match the Brisbane trials. We can’t find any published results from the trial.

However, VicRoads states it must travel at <10kph on private property. Fines from $826 and device confiscation apply for use on any road or any road-related areas, including footpaths, shared paths and public spaces.

There are e-Scooter trials in the Adelaide CBD by Lime and neuron. Otherwise, Queensland rules for powered wheeled vehicles apply.

It is illegal to ride a motorised wheeled device on the road, footpath, bicycle track, or anywhere other than private property. In any case, users must be over 18, wear a helmet and cannot exceed 15kph.

WA (care link is a PDF so check downloads folder)

Enshrined in the 368-page traffic code (pages 235-257) are absolutely no exceptions for motorised wheeled devices.

There is considerable confusion as the Traffic Code says powered wheeled vehicles that can be registered can use paths and low-speed public roads. But no e-Scooter or other device can pass Australian Design Rules, so it is a moot point.

A trial by Lime in Perth stated at 15kph but seems to have been reduced to 10kph.

There are trials in the Canberra CBD that have similar requirements to Queensland. Note that there are strict rules about using public spaces at significant Commonwealth assets located within the Central National Area, such as buildings, memorials, sculptures, fountains, poles, street furniture and trees or left along ANZAC Parade.

Otherwise ACT is a little more liberal in the use of e-scooters.

There are trials in the Darwin CBD that have similar requirements to the Queensland rules.

Is there any hope for e-scooters future use?

Yes and no. While the States and Territories all have different rules, and while limited paid trials have been conducted, laws for private use are unlikely to change any time soon.

But there are moves by the National Transport Commission to establish consistent rules for powered wheeled vehicles. It issued a 170-page position paper unfortunately titled ‘Barriers to the safe use of personal mobility devices’ in March 2018. That has been distilled and discussed by the various state and territory governments resulting in a 72-page position paper in November 2020. The States all demanded variations and options.

Speeds are likely to be 10kph in shared public spaces and up to 25kph on dedicated bikeways. It is highly unlikely that they will ever be allowed on roads. And it is highly likely that if footpath use is allowed that comprehensive third-party insurance and property damage cover (around $300 per annum) will be required for ‘licensed or designated’ drivers.

The best legal advice is that uniform laws regarding powered wheeled devices are not going to happen anytime soon.

The short answer is safe if used correctly. But the converse applies as well as use in the wrong environs.

There is no current injury or fatality data for Australia, and trial results are strictly secret.

Forbes in the US reported that almost 3,300 patients were admitted to US hospitals with scooter-related injuries between 2014 and 2018, a 365% increase. Total scooter injuries in that same period were 39,000, a 222% increase.

At least 29 people died in rental e-scooter accidents in 2019 according to a ‘very incomplete’ Quartz analysis of global media reports.

The US Center for Disease Control and Prevention has estimated 20 rider injuries per 100,000 trips.

A trial of e-scooters in Portland, Oregon found riders made up 5% of traffic crash victims in emergency departments.

Now US stats are not as relevant to us as they have 382 million people and the trials are way out of date.

But the stats also showed that bone fractures, nerve/tendon and head injuries were most common. And it found scooter injuries were under-reported as most went to a doctor instead of hospitals participating in the study.

Yes, we should allow motorised wheeled vehicles but on what terms and at what cost?

I was in Brisbane recently walking in the beautiful City Botanic Gardens when a speeding Lime e-Scooter brushed perilously close to me nearly resulting in an accident. Not ten metres later another weaved in and out of pedestrians at speed almost knocking one down. Not ten metres later another fell off the e-scooter at speed resulting in torn clothing and skin abrasion.

Without exception, all signs were totally ignored, making the otherwise pleasant foot journey much more perilous.

And we saw numerous instances of two people on an e-scooter and stupid larrikinism and stunts on non-paved areas in the gardens and city square.

But what rocked me was an e-skateboard rider hooning downhill in Margaret Street at speeds well over 25kph (we estimate over 40kph) as he weaved in and out of traffic.

With school holidays kids see these e-scooters at reputable stores like JB Hi-Fi and want one, please dad…

This morning during my local foreshore walk on the Central NSW Coast, I counted fifteen e-scooters – all illegally used. The majority of riders were under the legal age and without helmets. Plus, two e-skateboards dodging traffic on the Esplanade.

So, I rang JB Hi-Fi at Erina NSW and enquired about an e-scooter. I asked about the legality, and the salesman was unaware that it was illegal to ride them anywhere but on private property. I did not correct him.

He stated that the Xiaomi Mi Electric Scooter Pro 2 has a 300W motor (clearly illegal everywhere) and he had a far more powerful 800W Segway Ninebot with a speed limiter override.

I repeated the call to JB Hi-Fi at Tuggerah and got a similar response. Only this time, the salesman was more effusive, saying that he and his kids rode everywhere, roads, parks, footpaths – great for the whole family.

The only issue I have with that statement is that it should have made it clear that FEW AUSTRALIAN STATES OR TERRITORIES WILL ALLOW THESE DEVICES ANYWHERE BUT ON PRIVATE PROPERTY.

You can read about hoverboards – another form of e-scooter here.