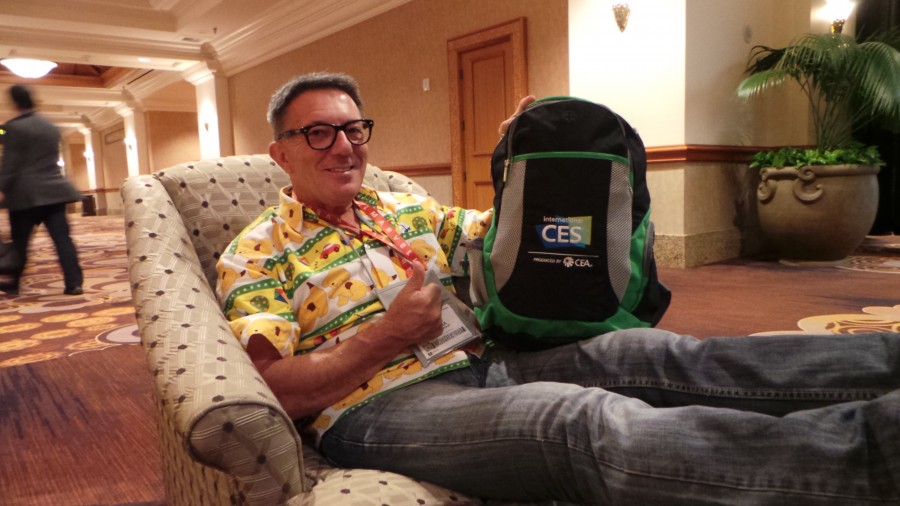 Before the Consumer Electronics Show even starts, there’s “CES Unveiled,” a small showcase of some of the best of CES, and then some of the little guys. Here’s what we’ve seen so far.

It’s not even Day 1 of CES, the place where most of the year’s hot new technologies will be unveiled.

Almost every big name will be here, including LG, Samsung, Panasonic, Sony, and Intel, to name but a few. The list of companies is huge, and the massive directory sitting on the desk in my hotel room contains names that many of us probably have never heard of.

Today, though, CES was about unveiling some of the best in show technology, as well as little bits and pieces that exhibitors want the press to see before the show starts tomorrow.

We didn’t nearly get through it all – too many people there – but the first table we checked out was one others were mentioning to us, with Dexim showing off a Bluetooth pen stylus.

Similar to the accessory Asus packed in with its PadFone, this is designed to let you write and draw on your iPad or tablet, but also answer calls with it, bringing it to your ear and speaking into the pen.

The company also showed off a couple of iPhone 5 rechargeable cases, as well as a Bluetooth camera trigger.

Sound drew us in pretty quickly at CES Unveiled, with quite a few headphone and speaker companies unveiling their wares, before the big brands could make a mark.

Ion was doing its best to show iPhone and iPad friendly accessories, with the big Job Rocker speaker box, the iDJ 2 Go iPad DJ controller, and the Clipster, which is a Bluetooth speaker on a slightly over-sized carabiner clip.

House of Marley was showing off some premium new headphones and music docks, many of which have a very wooden look to them, while Soul let us take a peak at its new range of celebrity headphones, which have colours chosen by athletes, not music superstars.

Like the Ludacris headphones we checked out a while back, these will come in multiple varieties, even if the only ones we’ve seen so far are of the over-the-ear variety.

Speaking of athletes, another brand of earphones was showing off a new type that has been designed not to fall out of your ears when you go running.

We have it happen when we’re walking, but this is apparently a big problem for anyone exercising or jogging with music, and Yurbuds are looking to fix this.

Rather than just throw the earphones in your ear, these use “Twistlock Technology,” which basically means you have to twist the earphone into place in your ear to keep it there.

The buds are resistant to sweat and water, and feature a cloth cable and a remote with a microphone, and have even been highlighted this year as one of the CES Innovation award recipients.

We looked it at it last year, and found it to be very impressive, but how about an 84 inch tablet?

We’re pretty sure you won’t be packing this in your backpack, but 3M was showing off a massive multi-touch display.

From the looks of things, it’s probably more made for businesses, though with 40 points of touch, we could see a use for gaming, or at the very least, teaching.

There was more to be seen, but there’s only so much time, so join us tomorrow when we really get stuck into CES as it officially opens!