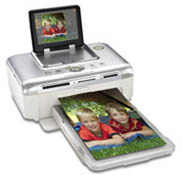 It was Motorola that introduced the concept of slim phones to the world with its highly popular RAZR, but Samsung has also jumped on the bandwagon with its own line of slim phones. The Z510 is the slimmest 3G phone on the market, and is only a sliver thicker than the RAZR.

The first thing that strikes you about the Z510 is its cool looks. It?s got a unisex appeal allows it to fit in with the latest fashion phones or even the boardroom.

Samsung phones have always been very multimedia friendly, and the Z510 is no different. It?s got one of the most vibrant screens we?ve seen on a phone, making photo or video viewing a pleasure. There?s also a colour screen on the outside for checking caller ID and battery life.

Inside the hinge there?s a 1.3 megapixel camera that can rotate to face you or the rear of the phone, which takes some getting used to. The camera?s resolution is lower than Motorola?s RAZR V3x, though admittedly the Z510 is slimmer. There are some interesting options available when you take photos, including Sepia (making photos look old fashioned), and a multi-shot mode that takes almost two photos per second.

If you want to listen to music on the Z510 you?ll be sorely disappointed. Even though you get a stereo MP3 player built-in, and there are Play, Pause, and Skip buttons on the exterior of the phone, you?re limited to only 138MB of available memory. This is good for approximately two hours of music and a handful of photos.

Being a 3G phone, the Z510 lets you enjoy the latest downloadable content, music, videos, images and text, from your mobile phone carrier. We tested it with Telstra?s service, and it worked flawlessly.

One of the best features on this phone is the Picsel Document Viewer. It lets you load office documents onto your phone and view them later via a neat and intuitive application.

One of the biggest problems with the RAZR was its metallic keypad, which made texting difficult. The Z510 has no such problems as the keys are nicely spaced.

The low-resolution camera turns out disappointing photos, with many of our test samples being out of focus or exhibiting grainyness. The excellent display does much to hide the poor photo quality, it?s only when you transfer the files to your computer using the bundled PC Link USB cable or Bluetooth that you notice the deficiencies.

Samsung?s menu system has been fairly difficult to use and understand in past models, but the company has recently updated the software and now it competes with the best of them.

As with any 3G phone, battery life takes a significant hit, and this is compounded by the thinness of the Z510, there is simply less space to put a decent-capacity battery. In our tests it lasted two days, with an hour of talk time each day, before we had to recharge it.

Samsung clearly has a winner on its hands with the Z510. It?s a stylish phone that appeals to everyone and still retains most of the features we?ve come to expect. If you?re after something that just works with minimum fuss, this is the phone for you.