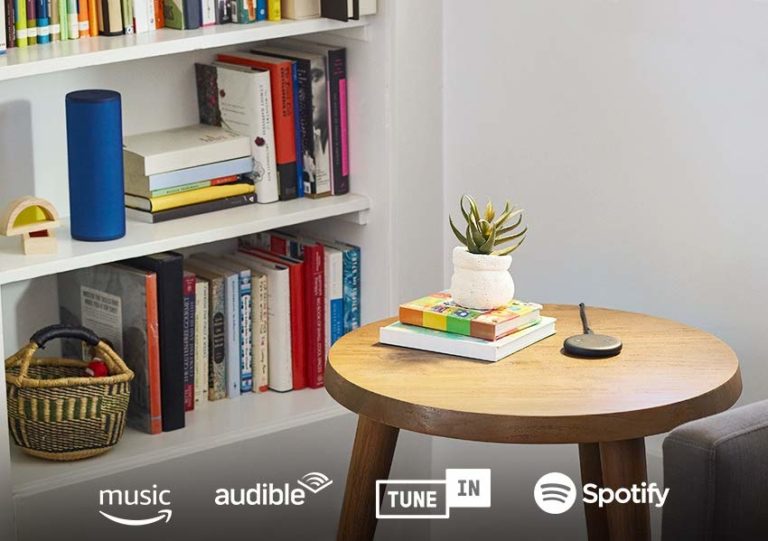 The Echo Input is a clever niche device to add most Amazon Alexa voice capabilities to an existing amplified dumb speaker via 3.5mm AUX cable or Bluetooth.

Basically, the Echo Input is an Echo Dot without the speaker.

The cheapest Echo Dot speaker is $74. In our review, we wrote, “It would be unkind to expect a small speaker to do anything but voice and its fine for that. It has no bass, limited mid-range and no treble. The best description for a music signature is ‘painful’ with fairly high levels of distortion at a maximum volume of 75dB.”

But people were buying the Echo Dot as the entry-level to add Amazon Alexa and its far-field mic capabilities. The Echo Input costs $55 and means you don’t pay for a speaker you probably don’t need.

It comes with a 5V/1A (5W) USB-A to micro-USB charger/cable. Now if you are like me and every power socket is in use, you will be happy to know that it works fine on a standard PC/amplifier/router/Roku USB-A 2.0 5V/.5mA (2.5W) port as well.

First, we attached a JBL Extreme 2 via 3.5mm cable and opened the Alexa Android app. Note even though the speaker is battery powered it needs another 240V power point for continued use.

Press add a device, add Amazon Echo, Echo Input and then connect it to your Wi-Fi network (2.4 or 5GHz). It then prompts for speaker connection – Bluetooth or AUX.

Remember that the attached speaker must be amplified – Echo Input’s 3.5mm output has a very basic pre-amp (no amplifier) so it won’t drive wired headphones or speakers.

Voila – done! It worked with AUX.

We had issues later changing from AUX to Bluetooth.

At first, we thought it might be that the Bluetooth speaker was about 4 metres away but moving it closer made no difference. We also wondered if the USB port on the PC was underpowered – it made no difference with the charger. We reset the speaker to factory defaults – no difference.

No, it was just not connecting.

Persistence paid off, and the JBL was finally recognised when we placed it beside the Echo Input. Our best guess is that the JBL supports multipoint connections (will connect to two Bluetooth sources) and the Echo Input does not like that.

When you say Hey Alexa it chimes to confirm it has heard the watchword. I am not sure that is necessary as a blue LED lights up too, but you can turn it off in the app. The app also emails you if your speaker becomes disconnected or if Alexa if unresponsive.

We found response time fine over an AUX connection. But as the day evolved, it was hit and miss – well all miss. We would get the chime but no audio response.

We found on Echo Input’s website, “Speakers connected by 3.5 mm audio cable may power off if not used for an extended period. When possible, we recommend turning off the speaker’s power-saving mode by following the manufacturer’s instructions.”

On Bluetooth, we found that lag time could be a little long often missing the first few words of Alexa’s response. This is both a power saving and Bluetooth wake-up issue.

Echo Input like Echo Dot has the same four far-field mics. It claims to be able to hear you across the room – and it can when things are at normal ‘household’ <50dB quiet.

The trick with Echo input is to place it closer to where you would normally issue commands and place the speaker a little further away. Or shout! We tried many different locations, and it made no difference.

What it won’t do

It does everything, and Alexa Echo speaker does except Calling and Drop In via Bluetooth. Incoming Drop Ins are not supported and convert to incoming Alexa calls which you can choose to accept or reject.

The 3.5mm AUX cable is stereo (3-pole) as such should support a stereo signal. Signal levels were acceptable, and there was no lag. Sound quality was fine, but stereo separation was noticeably lower, if not absent.

Bluetooth only supports the SBC codec and should support a stereo signal. We noticed a loss of volume, quality and importantly stereo separation when Bluetooth streaming from Spotify compared to directly connected Samsung Galaxy S10+. We need to investigate more if it does support stereo pairing mode (the JBL is stereo in one device).

It does not support Multi-room setup on Bluetooth. It is fine with AUX.

We found using Alexa to increase and decrease volume (it will increase from 1-10) was ineffective. Yes, you should set the speaker manually to maximum level first and use Alexa after but it was not as linear or precise as manual adjustment

I am sure it can alter the 3.5mm or Bluetooth signal output levels slightly, but it really is best to adjust the speaker volume manually. Similarly, if a speaker goes to sleep, Alexa may not always wake it.

It will not work with Sonos speakers at present – a new skill is coming.

The main use is to add Amazon Alexa to an existing amplified speaker or for that matter an amplifier and speakers. Or perhaps place it somewhere that you need to reinforce Alexa dead voice spots. To that end, it is cost effective and unique.

It’s not going to control that device as well as it would an integrated speaker – it is just a smart music output device.

And that is probably my biggest gripe. The JBL speaker is one of the best stereo BT devices you can buy. Alexa Input worked intermittently with it. It was nowhere near as reliable and responsive as using Bluetooth with a Samsung Galaxy S10+. And the sound quality was adequate at best. Unfortunately, we did not have another speaker to test – that is on the list!

Post review note: We have briefly tested a Bose SoundLink Revolve+. This is a mono 360° speaker with both Bluetooth and 3.5mm AUX inputs. The sound quality on AUX and Bluetooth is better leading me to believe the Echo Input does not support stereo output nor does it like Multi-point Bluetooth speakers. We will report if we find more information.

Features
Value for money
Performance
Ease of Use
Design
Reader Rating0 Votes
Add Amazon Alexa Alexa vocie capabilites to a dumb speaker
To many issues with the JBL Extreme Bluetooth speaker used in the test
It cannot control attached speakers the way is can integrated ones.
3.1