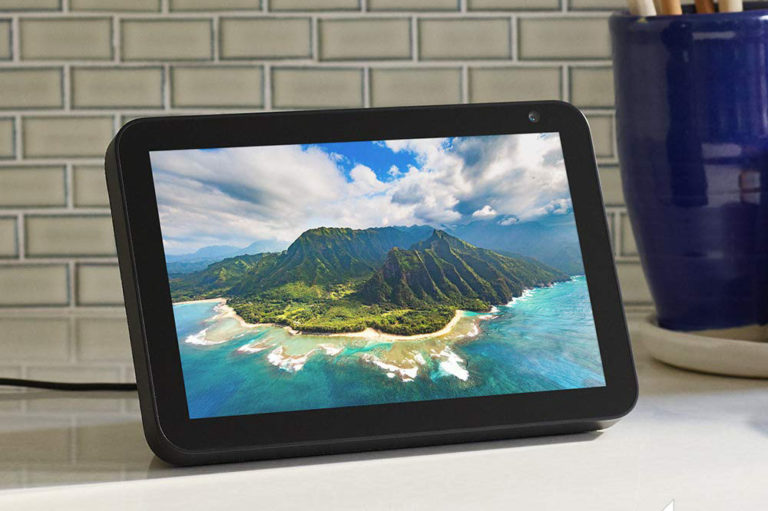 In the battle of the voice assistants it was inevitable that the combatants, Google and Amazon, would go visual. Amazon’s Alexa devices with screens are called “Echo Show”, of which there are three models. The Echo Show 8 is the latest of the three, and in the middle in size and pricing.

What is the Echo Show 8?

So, what is an Echo Show? Well, it’s pretty much like any Amazon Echo smart speaker, except that the built-in screen allows more media delivery. Video, obviously, but also photos. One lazy “use” for home computers, and then the Internet, going back as far as I can remember, has been that you can “keep your recipes on them”. Well, I wouldn’t want to be talked through a recipe by any smart speaker, but I can say “Alexa, show me a recipe for Indian chicken curry” and a series of them from taste.com.au are returned. And then I can just have the recipe up on the screen as I cook.

You can use the Echo Show 8 to stream music from online services just like an Echo speaker. But it will also stream video from some services – in particular ABC iView and (of course) Amazon Prime. Plus YouTube. Apparently there was some kind of dispute between Amazon and Google (which owns YouTube) a while back, resulting in there being no YouTube on Amazon Show devices. Well, that’s not the case anymore, although there’s no specific YouTube app. Instead, when you say, “Alexa, show Penn and Teller Fool Me on YouTube”, the Echo Show 8 fires up the Amazon Silk web browser. Or you can use Firefox if you prefer.

From the front, the Echo Show 8 looks pretty much like an 8-inch tablet in landscape mode, propped up at an angle of around 75 degrees. But behind it is a body, roughly in the shape of a triangular prism. It stands 136mm tall, 200mm wide and 99mm deep. There are two finishes available: “Charcoal Fabric” or “Sandstone Fabric”. As the names suggest, the back is covered in cloth although there appears to be a firm chassis underneath hit. The bezel around the screen is around 13mm wide on all sides. At the bottom rear is the power input and a 3.5mm analogue audio output. There’s also a Micro-B USB socket. Some reports suggest that you plug an Ethernet adaptor into that if you can’t use Wi-Fi.

On the top are three buttons. One mutes the microphone so Alexa can no longer hear you. This has a red backlight and also shows a red bar across the bottom of the screen. Two others are to control volume. At the right is sliding switch. This disables the camera at the top right of the unit. And for extra assurance, slides a plastic cover over its lens. The camera is pretty basic, with just 1MB of resolution. But it works well enough for video calls. I linked Alexa to my Skype account so I could call anyone – “Alexa, Skype so-and-so” – in my contact list. I called up my brother who, like me, is on quite fast NBN. He reported decent video quality from my end.

Unless you want to experiment with the Micro-B USB socket, you’ll be using the Echo Show 8’s Wi-Fi connection to your home network. This is dual band and supports a/b/g/n/ac networks.

The Echo Show 8 packs two 52mm drivers, one on each side firing out to the sides. Amazon describes these as “neodymium”, which is the permanent magnet technology. It’s actually an alloy of the elements neodymium, iron and boron, and is said to be, “the strongest type of permanent magnet available commercially.” The enclosure design includes a bass radiator. Amazon says that the amplifier is rated at ten watts per channel.

The touch screen is LCD and features a nice glossy surface. It has a resolution of 1,280 by 800 pixels. It was bright and colourful, with creditable blacks. You can set the brightness or use the “Adaptive Brightness” mode, which sets brightness by reference to ambient light.

Using a separate speaker with the Echo Show 8

What if you want the usefulness of the Echo Show 8 but would like to upgrade the sound? There are three ways of doing that. The first and most obvious one is that you can simply plug an external speaker or sound system into the 3.5mm output socket. The next way is via Bluetooth. That proved fast and effective. I watched part of a TV show on the Echo Show 8 to see if there were any lip sync issues, but all seemed good enough.

But you can also connect to another Alexa-powered smart speaker. If you do that, the Echo Show 8 will continue to use its internal speaker for things like answering your questions, but when it’s streaming music it uses the specified external speaker. I set it up with the Echo Studio, taking advantage of the latter’s very strong audio performance.

There did seem to be a slight bug in this feature. After using the Echo Show 8 in that way for a while, I changed the settings so it went back to its internal speaker and packed away the Studio. Later when I went to stream some Spotify music, the Echo Show 8 reported “device not found”. I checked the settings and, yes, it was supposed to be using its own speaker, although the Echo Studio was provided as an option for playback. I fixed the issue by going to the Studio’s page in the Alexa app and “Deregistering” it. That meant that as far as Alexa was concerned, the Studio no longer existed. Once I’d done that, the Echo Show 8 happily went back to properly playing music using its internal speaker.

Alexa still doesn’t support TIDAL in Australia. Apparently, that feature is still limited to the United States, even though TIDAL has been available in Australia for quite a while. Just about as frustrating is the lack of support for DLNA/UPnP audio from in-home network servers. (Yes, there’s a paid skill for that, but this ought to be built in.)

The speech interpretation engine in Alexa is really pretty incredible. It’s even, perhaps, a trifle better than that in Google Assistant. But sometimes the system seems particularly obtuse. When I was checking out the services the Echo Show 8 could play, I saw Vevo and it was something with which I was unfamiliar. It turns out to be a music video service – a mini MTV if you will – which is ad supported. Cool. You set up access in the Alexa app on your phone (“add service”) and then you can simply ask for music video to play.

Now, I’m pretty sure I used the same form of words – “Play Billie Eilish Videos from Vevo” fairly consistently. Sometimes it would work. Sometimes not, instead throwing me into Amazon Prime videos. Usually saying “Alexa, play music from Vevo” would work. I went back to the Vevo service page in the app and checked out its instructions. It said the proper form of words was, “Play music videos for Billie Eilish.” That worked.

Incidentally, have fun saying “Alexa, play Vevo.” For me she responded, “For Vevo, just say ‘Play Vevo’”. Several times. Although Vevo is supposed to be ad supported, I never saw an advertisement on Vevo on the Echo Show 8.

The most common complaint in Amazon’s customer reviews is the inability to configure the on-screen clock to fill the screen or change the style. Apparently many would like to use it as a clock radio. But the Echo Show 8 insists on doing its own thing. For example, much of the time a “Try, ‘Alexa, do something or other’” tip is shown on the screen over the top of your background. Although, fortunately, not over the top of video content. There’s apparently no way of stopping this. Why not? It’s a little reminiscent of Clippy, the ridiculous “Office Assistant” introduced by Microsoft in Office 97.

You can’t get rid of that, but you can choose from various home page image options, including rotating through artworks, nature scenes and the like, or your own photos store on Amazon Photos (apparently an Amazon Prime subscription is required, or a separate paid purchase of space). You can upload a photo – just one – to the Echo Show 8 as your background. Why not a whole bunch of them?

But there are conveniences, too. You can set up alarms by voice, of course. You can also set “Do Not Disturb” – scheduled or manual – and other options. And you can also change the “wake word” from “Alexa” to “Amazon”, “Computer”, or “Echo”.

The music and audio services available on the Echo Show 8 in Australia are Amazon Music (of course), Spotify, iHeartRadio, TuneIn, Apple Music, Deezer and Vevo.

The sound was outsized; much bigger than you’d expect from such a small device. The Echo Show 8 had no problems with delivering fairly clean sound at surprisingly high levels. Party levels? No way. But decent background levels when the unit was across the room, and fairly listenable levels when it was up close. The sound was somewhat biased towards the bass, which made for a good rhythmic performance and easy listening. Indeed, it was probably that which made the unit sound bigger than it was. When it was on my desk, playing the aforementioned Billie Eilish, there was a fair amount of rattling of other things on my desk due to the bass.

I measured the output. The bass extended strongly down to 75 hertz, falling away below that to six decibels down at 65 hertz and 12dB down at 55 hertz. Those decibel measures are referenced to the average midrange output, because the upper bass was way, way above that in level. The output peaked at +12dB at around 125 hertz.

I should mention that I conducted my measurements using a pink noise track from Spotify. Without DLNA or other ways of feeding my own music to it, I had to rely on other’s test tracks. (Yes, I know that pink noise falls away at 6dB per octave. I filter the recording appropriately before reporting on it.)

The Echo Show 8 is an extremely useful inclusion for those who want an Alexa-based smart home, or just as a standalone streaming media player. But it could be even better with the addition of things like a proper clock-radio mode, and support for DLNA/UPnP music.

Amazon’s pages for the Echo Show 8 are here and here.

Alexa 101 – a guide to using the voice assistant