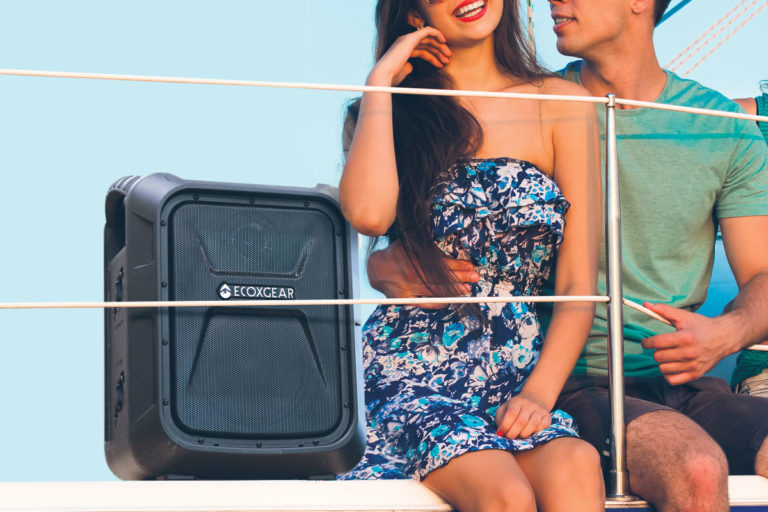 Winter is now behind us. Time to get outside. Want something to deliver a big sound for you while you’re there? Let’s see if the Ecoxgear EcoBoulder+ outdoor Bluetooth speaker will do the job.

About the Ecoxgear EcoBoulder+ speaker

The Ecoxgear EcoBoulder+ is a quite large speaker. It has an extensible handle and a pair of wheels so you don’t have to lug it across the picnic ground. With the handle pushed down into the body of the unit, it stands 51cm tall, 38cm wide and 31cm deep. It weighs a bit more than 12 kilograms.

The Ecoxgear EcoBoulder+ has a control panel and display on the top. On the left are two round bays with twist plugs to seal them up against water. In one is the 240 volt power connection. In the other is a 3.5mm auxiliary input, a 6.35mm microphone input, and a USB socket capable of delivering 2.1 amps to any device requiring USB power.

On the right hand side is a vinyl pouch and sturdy bottle opener. Inside the pouch is a waterproof phone case. You can leave your phone inside that in the pouch. Should the whole thing fall in the water, you’ll be fine – assuming that you’re running the Ecoxgear EcoBoulder+ on its internal battery and the two plugs over the connection bays are in place. The speaker is IP67 rated. That means dust proof and waterproof for immersion in up to a metre of water for up to half an hour.

It’s rated at 50 hours of operation on the battery.

There are also two glass holders on the top. Again, waterproof. But if you spill something that will dry sticky, it’d be best to wash off the unit without delay.

More on inputs and performance

In addition to the 3.5mm analogue input, there’s a 6.35mm microphone input (with its own separate volume control). Bluetooth is built in, as is an AM/FM radio. There are five presets for remembering your stations.

The Ecoxgear EcoBoulder+ has 100 watts (dynamic, whatever that means) available to power its three drivers. There is a 75mm “tweeter” and a 200mm full range driver on the front, and a 200mm bass-only driver at the back.

Apparently you can use two Ecoxgear EcoBoulder+ speakers in a stereo configuration – Bluetooth only, though. Not for radio or auxiliary input.

Well, I spent a little time contemplating how I should best conduct this review, and for a while considered doing it the same way I normally do. That is, closely paying attention to the details and quality of sound reproduction. Which, of course, is definitely not the right way to proceed. The Ecoxgear EcoBoulder+ is not for refined listening. For goodness sakes, it’s not even stereo. You want to some music beautifully delivered, go inside and put on your proper stereo.

No, the proper criteria for this category of speakers are: will it deliver entertainment in an open space, sitting on the ground from where it is wont to be used; will it go loud enough; does it represent the frequency bandwidth well enough for music to be enjoyed?

And the answer to each of those questions is an emphatic “Yes!” I’m in my backyard as I’m writing this, sitting at my outdoor picnic table under a newly leafing Manchurian Pear tree. Six metres away The Door’s “When the Music’s Over” is emerging from the Ecoxgear EcoBoulder+ speaker at several notches short of full volume. Densmore’s kick drum is there at around the right level. His whole kit is poking nicely through the mix. There is a tendency to a little upper midrange stridency, but not too much. And that’s probably to be welcomed in an outdoor setting where there’s a lot of sonic crowding in that frequency band.

How about some music that just about no-one will be playing during an outdoor barbeque: Schubert’s String Quintent (hey, it was already queued up on TIDAL when I opened up the app). As with The Doors, the music was being fed to the Ecoxgear EcoBoulder+ speaker from my mobile phone via Bluetooth. The music was tuneful and surprisingly involving. I thought that upper midrange peak might have made the violins too harsh, but it seemed to merely add some presence.

Again, this is not for careful, critical listening. But want to run some nicer background music outdoors? The Ecoxgear EcoBoulder+ delivered.

With very bass-strong material – yes, Billie Eilish – the performance was simply impressive. I’ll get through this bit quickly because I fear I’m disturbing my neighbours. I could go anywhere in my largish backyard and enjoy gobs of the middle and upper bass. The bottom octave was quite recessed, but I guess that would have been asking too much.

Speaking of where you listen from, I found that the sound character remained fairly consistent up to about 45 degrees to the left or right of straight ahead. And it was still adequate up to 90 degrees. Going behind muffled the sound considerably. If there’s a wall handy, the sound was improved a little by placing the speaker up against it. Bass tends to be strengthened by such boundary effects and some of that diminished bottom octave from Billie Eilish was restored by that positioning.

Using the auxiliary input of the Ecoxgear EcoBoulder+

Since I was in my backyard and thus with access to my Wi-Fi, I turned the Ecoxgear EcoBoulder+ speaker into a networked speaker. I just plugged a Chromecast Audio device into its auxiliary input, and powered it from the speaker’s USB connection. Voila, Wi-Fi speaker!

The FM and AM radio sections worked okay, but I’d note that they are set to a fairly high level. I have the unit on the table now, next to me, so I can closely examine its various bits. At a volume level of 00 the sound is muted. At 01 – the maximum is 30 – the volume is distractingly loud. You really need to put it some distance away from you.

I gave the microphone input a whirl. I could imagine the Ecoxgear EcoBoulder+ being a useful little P.A. in some circumstances. A label warns that you should only use a dynamic microphone. The only one of those I have is a Shure SM58 – a rather famous and widely used model. This sounded okay, but even with the microphone level on the speaker turned up to the maximum level, the sound was fairly quiet. I checked the wiring on my XLR to 6.35mm cable and it all seemed to be okay. I imagine that those cheap microphones with the 6.35mm plug already attached could well be higher output models. Choose carefully.

And, of course, it’s robust and waterproof, so it ought to be great this summer.

You can see our coverage of other portable Bluetooth speaker here … although none of them is quite in the same space as the Ecoxgear EcoBoulder+.