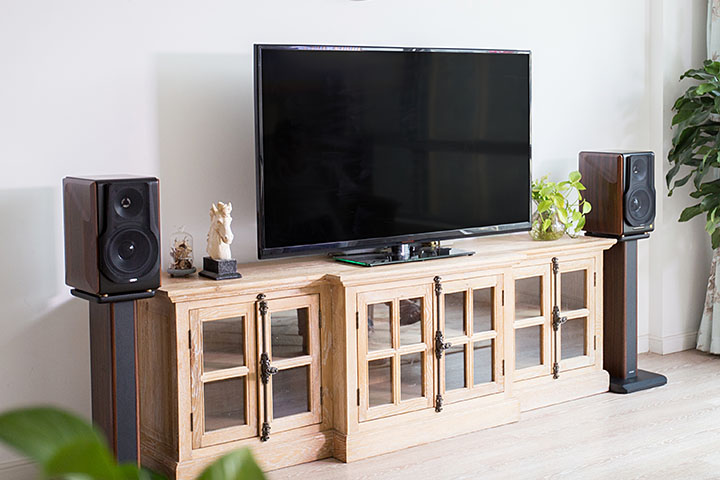 The last time I reviewed an Edifier product was many years ago. It was a tiny little USB-powered computer speaker. My, things have come a long way. The Edifier S3000 Pro speakers can certainly be used as computer speakers. But they are powerful, versatile and impressive speakers which work perfectly well as the main music speakers for a large room.

The first thing I noticed about these speakers is their weight. I like heavy speakers. It indicates solid construction. And that goes with reduced sound colouration and reduced distortion. The Edifier S3000 Pro speakers are heavy.

There are two of them in the Edifier S3000 Pro carton. They are a stereo pair or, as Edifier calls them, 2.0. The left speaker weighs 10.35 kilograms. The right one weighs 10.45 kilograms. The extra weight for the right-hand speaker is because it has a little more inside. I’d call them large-bookshelf-sized. They are each around 360mm tall, 210mm wide and 300mm deep.

Both speakers are powered. Both plug into power points. But only the right one has inputs.

They connect together wirelessly using KleerNet wireless technology. This is a system that apparently supports near-lossless audio at 16-bits and 44.1kHz sampling. The two speakers are factory pre-paired, but can be re-paired should the connection somehow be lost.

The Edifier S3000 Pro speakers come with a remote control, two power cables, optical and analogue cables, plus a USB cable for connecting to a computer.

The grilles are removable and are a little unusual, in that they are quite see-through. They are secured by four pins around the bass/midrange driver. Beneath the grille on the right-hand speaker is a small horizontal display panel. This shows which input is currently selected.

Inside each of the Edifier S3000 Pro loudspeakers are two drivers. The bass/midrange is a more-or-less conventional 165mm unit. But the tweeter, well that’s different. Edifier variously describes it as a “planar diaphragm tweeter” and a “planar ribbon tweeter”. Generally, “planar magnetic” and “ribbon” tweeters are considered to be two different design techniques. Without more information, it’s hard to say which these are.

But what they are not is the usual dynamic speakers with a 25mm or thereabouts dome. Both planar magnetic and ribbon use a lighter moving assembly to produce higher frequencies than dome tweeters. And they are generally rarer and more expensive. These ones have a phase plug or wave guide in front of them, which likely reduces the directivity inherent in flat panel transducers. And they seem to be mounted in a gentle horn, increasing their output efficiency.

“What?” I hear some crying, “Only 8 watts for each tweeter!?!” Don’t worry, that’s plenty. In the real world, as in the world of music, sound intensity diminishes rapidly with frequency. The power proportions are about right.

Edifier rates their frequency response at 38 to 20,000 hertz.

I used my old smashed-up Google Pixel 2 phone to confirm that the speakers really do support aptX HD for Bluetooth. The XLR inputs are probably overkill for speakers at this level. Don’t get me wrong, the Edifier S3000 Pro speakers are very good. But probably not quite good enough to be paired with the kinds of source devices which have XLR outputs. I didn’t have any appropriate equipment to hand with those outputs.

What I did do was use the USB connection, as (extensively) outlined below. And the analogue input, using my Rega Planar 3 turntable with Rega Exact cartridge. And the optical input, using a Chromecast Audio device.

Normally when reviewing speakers, I put them on my secondary stands. But these were a little too large, so I put them in on the stands normally occupied by my $2,000+ passive loudspeakers.

In short, the Edifier S3000 Pro speakers are real high-fidelity loudspeakers. They run quite loud enough to fill my 5 by 7 metre office with quality sound.

Initially they seemed a touch bright. But around the back are bass and treble level controls. I take it that they adjust the relative balance of tweeter and bass/midrange. Backing off the treble control from 12 o’clock to around 10 o’clock tamed that and brought them into fine balance.

The sound produced, especially when they were turned up to a good high level, was dynamic and lively, while retaining that balance. There was excellent detail, with the tweeter delivering everything in the music. Again, there was a touch too much emphasis of surface noise with LP playback, but the tweak I mention fixed that.

I did have to be careful, though, switching between inputs. The output from my phono pre-amplifier is pretty respectable by the standards of such things, but it was still much lower than the Bluetooth or optical inputs. A couple of times I switched over while the level was up high for the record playing input, only to have one of the other inputs blast out some ten decibels higher than was comfortable. Yet the speakers happily took it.

The bass performance of the Edifier S3000 Pro speakers was a surprise. A good surprise. Edifier puts the bottom limit at 38 hertz. I’d say it easily reached that and went beyond it. For example, on Janis Joplin’s excellent 1969 album, I Got Dem Ol’ Kozmic Blues Again Mama!, there’s some accidental bass in the track “Maybe”. This is mostly a mixture of 50 hertz and 27.6 hertz. Both frequencies were clearly being reproduced by these speakers.

That made for a good, solid bass grind from the Edifier S3000 Pro speakers.

If there was a weakness, it would be in the imaging. There was a good wide spread, but not quite the precision in the location of the images, nor the sense of depth and height, that my regular speakers deliver. That said, those speakers cost around twice as much. Nonetheless, I do wonder whether things could be improved if there were an option to connect the speakers by wire. The way they are, only the wireless connection is possible.

Naturally, I also played a fair bit of music through the Edifier S3000 Pro speakers using the USB connection. When you select the USB Type-B input, the speakers turn into a USB Audio device. If I understand the somewhat unclear instructions – and it seems to be the case – they conform to the USB Audio Class 2.0 standards. That means a driver is required for Windows 7, 8 or 8.1, or Windows 10 before the early 2017 “Creator’s Update”.

When I plugged it in into my Windows computer – with the current version of Windows 10 – the speakers failed to appear in the list of available devices. It seems that the USB circuitry isn’t powered up until you switch to it as an input. When I did, it appeared in the Windows Speaker dialog, with sampling rates of 44,100Hz, 48,000Hz, 96,000Hz and 192,000Hz and resolutions of 16 and 24 bits on offer. Satisfied, and intrigued, I fired up Foobar 2000, my preferred high-resolution audio player, set the output to the WASAPI connection to the speakers and set some music playing. The music I chose was 44.1kHz, 16 bits. It played perfectly.

The reason I was intrigued was that missing from the reported list of supported sample rates were 88.2kHz and 176.4kHz. These are both rarer high-resolution audio formats than the others, nonetheless some music does come at those rates. I tried sending some 88.2kHz music to the speakers and Foobar 2000 came back immediately and told me it was an invalid format for the speakers. Oh well.

So, I sent the Edifier S3000 Pro speakers some 96kHz, 24-bit music, a very common high resolution format. It played after a fashion, but with a nasty, crunchy noise overlaying much of the music. I had the same result with 192kHz, 24-bit music. So, I backed up to 16-bit, 48kHz material and the result was … the same. Up to that point I’d been thinking that perhaps there was some bandwidth problem, but everything can handle 16 bits and 48kHz.

Then I switched the output over from WASAPI to Direct Sound, which is the standard Windows system for handling audio. And all those tracks now worked fine.

Computer audiophiles generally use WASAPI or ASIO for outputting music to external digital to analogue converters. WASAPI stands for Windows Audio Session API. It’s a standard part of Windows. ASIO stands for Audio Stream Input/Output and is a proprietary protocol developed many years ago by Steinberg to support its professional audio gear. Both of these allow software to communicate directly with audio hardware.

Windows Direct Sound is a little different, despite the name. It manages all sounds. So, for example, if you’re listening to some music and the computer makes a notification sound, DS will mix it in and you’ll hear it as well. It will also convert all standard PCM formats to something that the audio hardware will understand.

So it’s very useful. But because it does all that mixing and, possibly, conversion, audiophiles tend not to trust it and prefer WASAPI.

I am somewhat surprised by the fact that WASAPI doesn’t work properly with these speakers. I’ve reviewed many DACs and computer speakers ranging in price from $99 to $9,000, and every single one of them has worked properly with WASAPI.

It’s possible that the speakers do actually need a special driver to work properly with WASAPI. The manual is ambiguously written. It gives a couple of web addresses “for details”, one for XMOS (the USB hardware maker) and one for its own site. Both pages are dead. Exploring the sites further didn’t yield any results.

Well, if all else fails, you can always ask for help. I emailed Edifier tech support using the contact page and asked if there was a driver. The next day a response came back as follows:

Thanks for your enquiry. You may go to the S880DB page at https://www.edifier.com/au/en/speakers/s880db and find the windows driver a the bottom.

And it worked! Two points, though. The first is, why isn’t the driver available on the page for these speakers?

Second, this driver doesn’t support either 88.2kHz or 176.4kHz sampled music files. However it does play the more common 48kHz, 96kHz and 192kHz files.

But that’s getting pretty nit-picky, given the price and other virtues of the Edifier S3000 Pro multimedia speakers. If you’re after solid all-round speakers for delivering room-filling music from multiple sources, check them out. And remember, you can turn them into network-capable speakers cheaply simply by adding a Chromecast Audio.

The website for the Edifier S3000 Pro speakers is here.