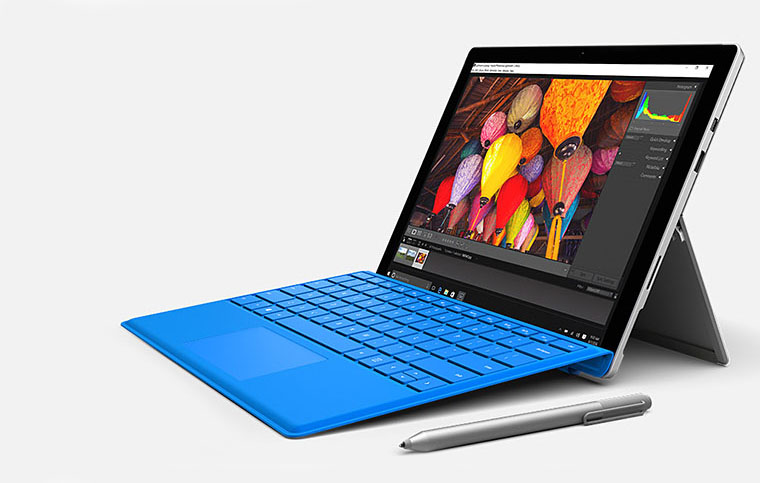 I’ve held off for a while on this third and final instalment about my time with the Microsoft Surface Pro 4 because I showed the whole thing to Microsoft, and it may have come up with a fix to some of the problems that had been troubling me. It also had some comments too, which are of the kind that large tech companies often give to people they apparently assume to be idiots. Those comments are at the end.

In Part 1 I discussed what a wonderful device the Microsoft Surface Pro 4 is, and why I chose it, and why I selected the basic configuration. In Part 2 I discussed how it had actually gotten better over time. And now for the few remaining problems.

Update (30 September 2016): So it looks like I was too quick to blame the Type Cover. Last night I flicked the new Type Cover up to put the Surface Pro 4 into standby. This morning I come out and find two things: the Surface Pro had unexpectedly rebooted (with no updates) a bit before 6am. And the new Type Cover would not work, even through a reboot. It needed a full shutdown to get it going again. Aaggghhh!

Update 2 (1 October 2016): Oh come on! I enter the office at 9:40 am — hey, it’s a Saturday. The Surface Pro 4 is sitting there, screen alight, waiting for me to appear. I wonder if it has been doing that all night. It recognises me and logs in. The keyboard won’t work. I check Task Manager. Looks like it rebooted around 8:52 this morning. I check Update History. The last update was yesterday (KB3194496) for which I personally authorised the reboot yesterday, and after which I had rebooted at least one more time. Now to get the keyboard working again. Take it off. This time, thankfully, taking it off and putting it back has righted matters. No more rebooting required.

Update 3 (3 October 2016): A couple of days of no problems teased me into thinking that maybe all would be okay. Against my better judgement. But now, at 10pm, coming home after a few hours out, I find that three hours ago the Surface Pro 4 rebooted itself again. The last update according to Update History was four days ago. The good news: the keyboard is still working!

Update 4 (5 October 2016): 7:42am: the Surface Pro 4 rebooted itself one hour and six minutes ago. No new updates, although apparently it checked for updates shortly after the reboot. The keyboard is still working.

The problem with semi-random problems

Every so often one of my daughters comes to me complaining that something isn’t working properly on her computer (MacBook Air for one, MacBook Pro for another). I always ask them when the last time they rebooted their computer was. And it always turns out to have been several months previously. They use their Macs like iPads.

One of the great things about Macs is that if there’s a problem with its operation, you know who’s at fault: Apple. With most Windows devices, is it Windows or the hardware that’s the issue? Hard to tell.

But with a Microsoft Surface Pro 4, there’s no such uncertainty. Sure, Photoshop or Quicken or Reaper might be creating a problem, but for the most part it’s likely Microsoft. Especially when the applications you use are also mostly from Microsoft (I use Office 365).

Furthermore, if you use the same operating system and software on a no-name desktop made of non-descript Taiwanese components, as I do, and it works so well that it typically needs a reboot less than once a fortnight, you have to start thinking the hardware’s the real issue.

So here’s a not untypical incident: 20 September, I arrived in my office at 7:30am. I shook the Bluetooth mouse (Microsoft brand). Hello Windows recognised me. Hmmm, that was odd. The apps that had been open were not open any more. Unexpected reboot, huh? Maybe there was an update.

No, the last update had been four days previously. The reboot was only a bit more than three hours previously. I hit the PrtScn key on the keyboard to take a screen shot of Update History in Settings. One Drive synced it to my other computer. I start up Task Manager and went to the Performance tab and hit PrtScn to take a screen shot showing the time since the reboot. I waited for it to appear on my other computer. Hmmm, still not there. Try again. Still not there. Ah, the keyboard has stopped working! Somehow, in the minute between the two screenshots, the first successful, the keyboard just stopped working. I used power/volume button combo on the body of the Surface Pro 4 to take the screen shot. The I rebooted and removed and replaced the keyboard. All was then working again.

For me it was the Type Cover keyboard. The regularity of the problem has waxed and waned over the months, sometimes improving with a firmware upgrade, sometime worsening.

The issue: it just didn’t work sometimes, and I couldn’t tell what would provoke its failure to work. A lot of gear has quirks, and once you’ve stablished what leads to the quirk, you can determine a workaround. But not if the problem appears often, yet randomly.

If you’ve played with a Surface Pro 4, you will know the satisfying way that the Type Cover keyboard snaps into place on its edge, self-locating so that its contacts mate with those on the Surface. And how you can pull the keyboard off quite easily to free up the Surface for use as a tablet. In theory, this sounds like an effective and usable system. In practice, this is indeed an effective and usable system.

Well, when the keyboard works. Indeed, it frequently did work. But not always, and the not always was often enough to be frustrating and at times embarrassing. All would be well. I’d close the Type Cover, take the Surface into another room twenty metres away, open the Type Cover, start typing and nothing would happen. The Surface would no longer recognise the keyboard. I’d clean the connections but it would make no difference. Usually to get it working again would take some combination – the order and number of steps would vary – of removing and reattaching the keyboard, rebooting, perhaps even doing a hard, complete shutdown and then starting up again fresh.

This was not the trouble free, reliable performance one wants in a premium product.

Here’s where Microsoft stepped in: providing a new keyboard (this one with the fingerprint sensor – my original one was the basic keyboard). And after more than a week, it looks like it has fixed the problem. Could the issue have been a defective keyboard all along?

So after a week, just to check, I put the old keyboard back on and I couldn’t get it to work, even through a reboot. So I put the new keyboard back on … and it wouldn’t work either! Until I did a hard shutdown and then started up the Surface Pro again. Since then it has continued to work without any problems.

By gum, I think it might have been the keyboard all along. And I’m starting to think that the keyboard may have contributed to other problems. There have been no random reboots since the new keyboard took its place.

And then there’s utterly random stuff. For example, while typing the first draft of this piece I clicked in the Search Box on the taskbar to type in a command and … nothing happened. I could not type in the box, even though the keyboard was working. So I rebooted (again). I’d used Photoshop during that session. Was it the culprit? Not likely. This recurred one more time, without Photoshop being used, and with the new keyboard in place.

For the purposes of this piece, I decided to check out the deeper shutdown options. So I held the power and volume up key for fifteen seconds. The Surface rebooted, and came back up in portrait mode, even though it was on its side, attached to the keyboard. And it was stuck. Switching the Rotation Lock on and off again didn’t help. So I rebooted (again). That got things the right way around.

And you see, the thing is with random problems you start to blame everything on the device. My Bluetooth speaker was properly connected and made the appropriate noises after every reboot and for an hour or two, then would stop working. Until the next reboot. Which I, of course, blamed on the Surface.

But I decided that was unfair, so I switched to a different brand of Bluetooth speaker and … the connection has been perfect ever since. I’m moderately confident now that the problem was all due to the first Bluetooth speaker, although there is a possibility that there was some compatibility issue.

Even with the difficulties described, I was going to stick with my Surface Pro 4. I’ve got a fairly high tolerance for those kinds of problems, and as long as it can be recovered somehow I’m okay. Now with the new keyboard it does feel much more solid, and is starting to engender some confidence that I can whip it out of my bag, let Windows Hello log me in, and not be embarrassed by it failing to do what I want it to.

It is also a reminder that malfunctioning peripherals can have a huge impact upon a computer, often in unexpected ways.

Should significant problems return, I will report them here. Meanwhile, the new reliability and the astonishing functionality of the Microsoft Surface Pro 4 make me, after eight months of use, endorse it.

An update that addresses this issue was released earlier this year. We recommend that you install this update to keep your Surface performing its best. You can get updates now by checking Settings> Update & security> Windows Update. To confirm the updates are installed, check Settings> Update & security> Windows Update> Advanced options> View your update history.

Me: The article makes it clear that I have kept the unit up to date and that I know how to view my update history.

Once you’ve turned on Windows Hello by going to Settings -> Accounts -> Sign-in options and selecting Windows Hello, you will have instant access to your devices through biometric authentication – using your face, iris or fingerprint to unlock your devices – with technology that is much safer than traditional passwords. For facial or iris detection, Windows Hello uses a combination of special hardware and software to accurately verify it is you, not a picture of you or someone trying to impersonate you. The cameras use infrared technology to identify your face or iris and can recognize you in a variety of lighting conditions.

Me: The article makes it clear that I know how to use Windows Hello.

Windows 10 Updates are installed on customers’ computers according to their Windows Update settings. Customers can adjust these settings at any time in order to manage the specific timing of when they’d like the Windows Update to be installed. To minimize impact during daytime hours, most choose to have the updates install overnight.

Me: The article makes it clear that I can distinguish between a reboot caused by a Windows update and one that was not supposed to happen.