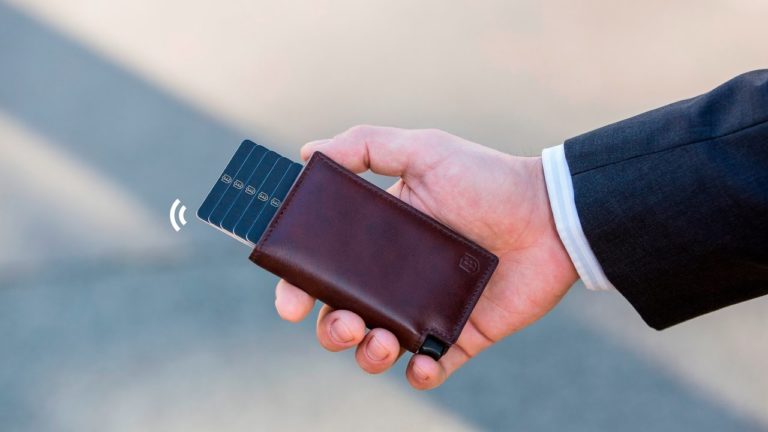 The Ekster Parliament smart wallet and tracker card is no ordinary wallet. In fact, the term wallet, as in note and coin storage is a misnomer. It is for credit cards and comes with a handy solar powered global tracker card.

The main section (solid aluminium under leather) holds up to six standard sized credit cards. The little push-in button at the bottom slides them up in a staggered manner – pick a card, any card – style. Even if you use a smaller number of cards, they seem quite secure and won’t fall out. It is also RFID protected to reduce the potential for hackers to read electronic ‘pay-wave’ cards.

The front flap holds another three cards – perhaps after a while, you could fit one or two more.

The strap over the front holds’ currency in a money clip style. It is quite secure, and in two weeks of use, I was never worried about Australian plastic notes slipping out. It is not as convenient for notes because you need to fold them to fit, but that is purely a personal issue. As for coins, Ekster advises they are good for tips or put them in a piggy bank. Yes, since using it I have gone cashless and left a lot of small tips – pass it forward.

The tracker is a TrackR

There is a slip pocket at the back of the Ekster Parliament for the TrackR card. It is solar powered, and three hours charge last a month. As we have only tested it for a couple of weeks, we do not know if a longer charge gives more use time.

The card uses Bluetooth 4.0BLE to connect to an iOS or Android app. That means it connects to your phone up to 30 metres away. If you misplace the wallet or are over 30 metres away, the app can activate a built-in ringer – handy. But, there is more – can’t find your phone? Double press the card and the phone rings.

The app shows the last seen location on a Google Style Map and uses the global TrackR system to ‘crowd find’ your missing wallet. If someone with a TrackR system (from key tags to pet tags) comes within 30 meters of the wallet, it will send you a message to you via the TrackR system. It is called ‘crowd locate’.

The TrackR works as promised but there are two holes in this plot. First, the TrackR card needs to have some charge left and two, Australian’s have not really embraced TrackR yet. While this is not a deal breaker you can buy the Parliament first and the TrackR card later.

There is a full manual and FAQs here.

Undeniably well made and a cool item for those who like money clips and smaller credit card style wallets. The price is US$89 for the wallet and $59 for the TrackR card (or $119 for the pair). We noticed it on Amazon for a little less.

I also noticed on Kickstarter that it’s working on a voice-activated version 3.0 (Alexa, OK Google and Siri) – I suspect this will just be an app upgrade.

If you have a penchant for this style, then it is a good buy. If you are like me and have a dozen or so credit/loyalty/utility cards, then buy a standard wallet and stuff it to the gills.