Elgato HD60 S – record and stream on Windows and macOS 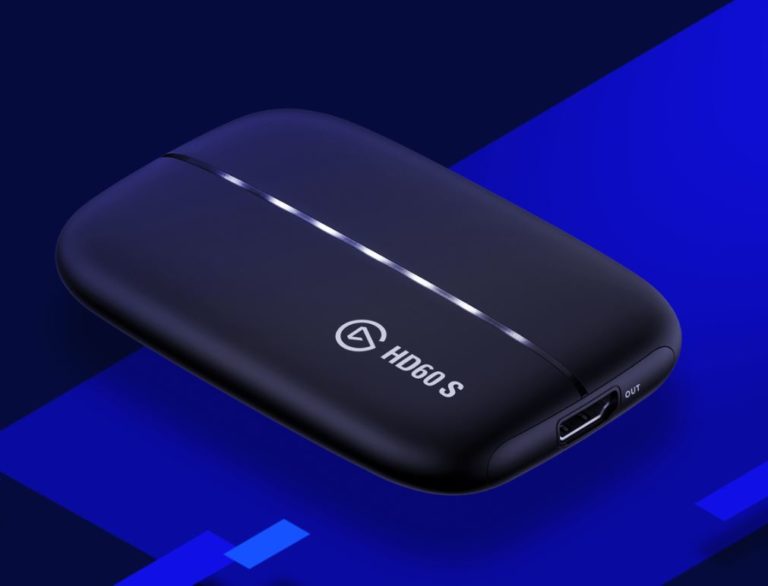 The Elgato HD60 S is a clever little black box that can capture what is happening, right here, right now, right on your monitor. The name Elgato is well known to gamers – especially to prove ‘they beat the machine’.

There once was a time where you’d patiently wait in a games arcade and watch as somebody else played before it was your turn. These moments could be tense and triumphant but were mostly a barrier between you and where you wanted to be.

Today it is all about gameplay on a PC, Mac, console, mobile or the cloud. It is amusing that we now live in a time where people actively seek out this experience online. They watch everyday people play and commentate on games. It might sound absurd, but some popular streamers earn six figures a month. Streaming your gameplay could be very lucrative.

The Elgato HD60 S is an entry-level video capture ‘box’ which can capture gameplay video and almost anything on your screen at up to 1080p@60fps (frames per second).

To be clear, it digitally captures whatever you see on the screen – and your PC/Mac then encodes/renders the final edited footage this into H.264/5 or VP8/9 formats. It has no built-in encoding.

Physically the HD60 S is a small, rounded-edge rectangle that weighs about 100g – about the size of a wallet. It is made from sturdy matte plastic, striking a nice balance between a premium finish and durability.

It comes bundled with Elgato’s free Game Capture HD companion software and provides everything you need to get set up and streaming in minutes.

We call it an entry-level simply because it is limited to 1080p@60Hz capture over USB-C. If you want to capture higher resolution then 4K60Pro model fits inside a desktop PC with a PCIe x4 lane expansion slot and is capable of 140Mbps.

To get techy, you plug an HDMI cable from a PC, Mac, PlayStation 4, Xbox One, Nintendo Switch, Android or iPhone smartphone (if they support video-out and are not HDCP copy-protected) into the Elgato HDMI-IN port.

You then plug an HDMI cable into its HDMI-out port and to the monitor so you can see what is happening (video and audio passthrough).

Then you plug in the USB-C 3.0 cable to the PC or Mac with Elgato’s video capture software. The USB-C provides power as well as data capture at up to 40Mbps. That is it!

Along the top is a discreet light strip – a simple visual indicator. When the strip shows white, it is connected. When it is red, it is recording or streaming.

There is also a 3.5mm audio jack to hear any sound in the video stream.

To be clear – it is a passthrough device that you can leave plugged into any 1080p monitor, or you can disconnect and throw it on your pocket or backpack.

What computer does it need to capture video?

Surprisingly it can get along with an Intel i5-4XXX, quad-core, 4GB and a hard disk. It can use the embedded Intel HD/UHD, or an AMD Radeon or NVIDIA GPU. It must have a USB 3.0 port.

While we used 8th generation Intel i5 and i7 processors we suspect that its success is more dependent on a,) device native video encoding and b)getting the speed from the USB port and later USB-C equipped devices will work better. Gamers should have no issues with powerful gear.

File size at 40 megabits per second (5MB per second) can be huge. An hour of uncompressed capture is from 15-20GB. Then you have editing, rendering and encoding so the faster the PC and disk – the better. Or you will drink a lot of beverage of your choice in waiting for finished product.

In theory, you could be playing copy-protected DVD/Blu-ray or streaming video content on your monitor. All device manufacturers have agreed to implement HDCP (High-bandwidth Digital Content Protection) – an anti-piracy protocol built into the HDMI, DVI and DisplayPort cable standard. When the Elgato HD60 S detects HDCP content (copy protected), it simply won’t capture this.

Now we don’t advocate piracy in any form, but sometimes HDCP can be too restrictive. Most mobile phones and consoles have HDCP protection, yet you want to stream from these.

You can get over this by buying an HDMI Splitter that strips the HDCP signal out of the stream. You can read more here, and we needed one for our test purposes across a range of devices. With it, we were able to record from Android and iOS devices.

While you can use much more expensive and featured capture software Elgato’s offering does not disappoint.

It supports recording capture to your computer as well as live streaming to accounts on Twitch, YouTube, Restream.io, Ustream, Facebook, and any other platform which supports RTMP:// streaming protocol. By connecting your accounts to Elgato’s software, switching between streaming platforms is easy via a drop-down box.

It has all the necessary features – bit rate control, output/record quality and framerate, as well as audio mix controls between game audio and adding vocal commentary. But it also has many professional features, e.g. themed scenes and graphics which you can overlay on your stream.

It also can create your own for bespoke content.

And I mean bespoke: you’re able to add a webcam feed so people can watch you reacting to games, insert custom pictures and text, and even add animations for subscribers or other activity on your channel feeds. For those gamers who are eager to market themselves and set up a branded channel, these customisation tools are very valuable.

If you are recording content to edit for platforms such as YouTube, the software includes a simple timeline trimming, arranging and editing tool. However, if you’re looking at making sharp video content, you’ll want to export your captures into a dedicated video editing program. It won’t cut it for flashy YouTube content.

Resident Evil 2 on a PlayStation 4, big screen TV and a 2016 MacBook Pro

My test was to see if the Elgato HD60 S impacted on game speed – lag.

Lag was undetectable on the TV screen with the card connected

This made for a natural playing experience and allowed me to remain invested in the game.

Once recorded, the files instantly export to a library folder, and ready for editing. I captured this footage on the ‘Best’ setting. I was very impressed with the overall quality and smoothness of the final video. Overall, the experience was effortless and very effective.

GadgetGamer’s take – very good for what it is

The Elgato HD60 S is an ideal choice for those who are looking to get started with streaming or a gaming YouTube channel.

It gets our recommendation as an entry-level device because of its overall ease of use, accessible and easy to navigate software, and excellent capture performance. For most, this box is all you need to start capturing and producing great content.

For those streamers looking for the maximum bitrate, 40Mbps may be a deal breaker. That is why Elgato offer other alternatives.

Price: The Elgato HD60 S retails for $269 at JB Hi-Fi, EB Games, Amazon and Mighty Ape. Astute online buyers may shave a few dollars off that but make sure you take local warranty, freight and taxes into account.

Features
Value for money
Performance
Ease of Use
Design
Reader Rating0 Votes
Small and portable
Minimal lag (at least on our test setup)
Very easy to use – both hardware and software
You need an HDMI splitter with HDCP stripping for many uses
If you want 2, 3 or 4K capture, then a desktop PCIe card is best
Editing tools are good, but pro-gamers will use Adobe Premiere or similar
4.3