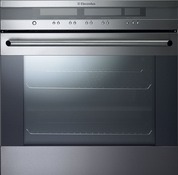 Electrolux has created a range of ovens so intuitive in design that you donnt need a manual to operate them. Called the E:Line range, they feature an Australian-designed technology called Intuitive Oven Interface or IOI, that makes it incredibly simple to select cooking modes, the oven timer or to change the clock.

Electrolux has spent three years researching how people use their ovens and developing technology to make them easier to use. All the complicated functions you donnt need have been stripped away. There are no ambiguous symbols: all the functions appear in full text and programming appears line by line to give users full control of the cooking process. The IOI was designed in Australia by product engineer for the Electrolux Design Centre, Christine Gall. Gadgetguy.com.au asked Christine to reveal the thinking behind IOI.

What is so special about IOI technology?

Electrolux IOI technology is so intuitive that you can virtually throw away the manual whic is rarely used anyway!

Why are intuitive controls so important on ovens?

The Electrolux IOI technology was engineered to make cooking easier and more enjoyable. Many users today do not know how to operate their oven to its full potential due to poorly designed controls. And as we all know, no one really takes time to read the user manual. Intuitive controls will enable the consumer to use all the functions and features of the oven that he/she initially paid for.

What research was done to establish how people use their ovens?

The development of the Electrolux IOI technology was based on consumer insights research collected via home visits. This research showed that a majority of consumers do not know the difference between their ovenns different cooking functions. They stick to one or two that they know. Nor do they understand how to use many of their ovenns features, like setting the cooking time or even the clock.

One of the reasons for this is confusing symbols and hidden layers of information. From these consumer insights three different types of interfaces were developed followed up by a user study, to select the type of interface that appealed to most users. The functionality of the winning type was then developed further into the IOI you see today.

What were common complaints about oven interfaces available today?

Consumers do not know the difference between their ovenns cooking functions. Consumers have difficulties doing a program cook, such as setting the duration of the cooking as well as start and stop time. Many even struggle to set the clock to the correct time of day. Consumers find the symbols used on ovens today confusing. Consumers struggle to find the right information due to hidden layers in the interface.

Who was involved in the creation of IOI?

The Electrolux IOI was developed at the Electrolux Innovation and Design Centre in Sydney. Christine Gall, design and project engineer developed the IOI design together with Greg Peake, design engineer and Lyndon Craig, industrial designer. Christine then continued to work with IOI, fine tuning the functionality and taking the interface to production.

How long did it take to create the interface on the E:line ovens?

The complete development of Electrolux IOI spans over 2.5 years. The first year was spent conducting consumer research. The next 12 months were then spent on the IOI design, overlapping the industrialisation which took 18 months.

In which models can shoppers find IOI technology?

The Electrolux IOI will be available in single, duo and double ovens in the E:Line Collection from October 2006 and will retail in most appliance retail stores nationally.