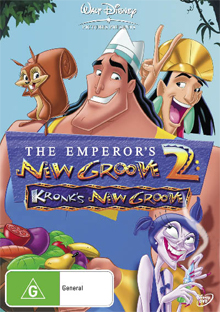 Obviously one for the kids the Emperor?s New Groove follows the adventure of Yzma?s huge henchman the oddball Kronk, who decides he wants to start a restaurant and has to impress his dad who is visiting soon. The film is full of funny action, including a massive cheese explosion and delivers exactly what you?d expect from a Disney feature. There are also many fairly clever references to other movies, as well as self-reverential skits. These moments when the characters tap on the camera to get your attention or make fun of pop culture icons like The Six Million Dollar Man. Clever slapstick and some great subversive adult double entendres.