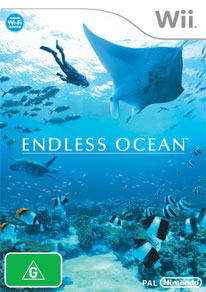 When Nintendo set out to play the game differently from its competitors, it was the motion control system, allowing players to wave the controllers around to make things happen onscreen, that got all the attention. And rightly so, because it was a breathtaking departure from the expected. However, it’s not the control system where the Wii really shines, we don’t think, but in some of the games that have been released for the console. ‘Endless Ocean’ is a case in point.

The ten-pin bowling game on the Wii, using the Wii remote to simulate chucking the ball down the alley, is genius, and there are a few other games that are made a lot more fun by using the Wii motion-sensing magic. But, frankly, with most of the Wii games, you’d be better off using a regular, more conventional means of control and, in Endless ocean, that becomes apparent pretty much immediately. Learning which button does what, how to direct your diver, how to teach tricks to some of the marine animals and so on, is a painful – and entirely unnecessary – experience. This kind of game cries out to allow a traditional controller and, since the Wii allows that, it should be an option. Instead, your first 15 minutes or so with this game is wasted learning how to control the dang diver.

And that’s a shame, because it might well put you off playing further into the game at all, because Endless Ocean doesn’t exactly kick off like the opening seconds of Mission Impossible. To describe the experience as ‘laid-back’ is being generous, as the soporific pace of the ‘action’ starts to make you wonder if anything at all is going to actually happen in your lifetime.

An ocean adventure game with a heavy – very heavy – storyline to explain why you’re stuck on a boat in the middle of the vast blue ocean, Endless Ocean casts you as a rookie diver and sends you splashing into the sea to identify fish, take people out on dives and befriend certain marine marvels. If it all sounds a bit listless and unexciting, that’s because it is for at least the first hour. But, miraculously, if you stick with the plodding narrative, the clumsy interfaces and the dreadful ‘last last generation’ graphics, Endless Ocean starts to become slightly fascinating.

This game teaches you stuff, as you dive, which sounds boring but actually isn’t. Your dives make you learn about the marine life and that becomes an incentive to keep on playing, going for one more dive, trying to find a certain fish, or place, or please one of your diving clients. Success brings you rewards, usually in the form of better or more varied equipment, or ‘tools of the trade’. Animals befriend you and can become your ‘partners’, allowing you to train them or take them out with you on your excursions. There are sunken artifacts and treasures to discover and, if you’re feeling particularly lazy, you can even pop back to the boat and sit in the sun lounger to watch the world crawl by.

Endless Ocean, then, is clearly aimed at total videogaming novices, with its almost charmingly basic character creation, a story that leads you by the nose so you’re never left wondering what you’re supposed to be doing next and a distinctly non-threatening progression system. It’s so relaxed as a gaming experience it’s virtually comatose, but there’s an underlying charm that grows on you and becomes compelling. Best of all, it’s such a different experience as a videogame and such a refreshing change from the juvenile gun-fests that usually swamp games consoles, that it deserves at least a little of your time and money.