Enslaved: Odyssey to the West 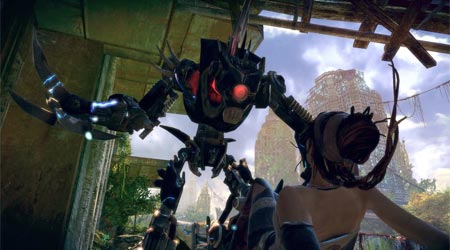 Literally starting with a bang– several, in fact – and going on to deliver one of the best openers in a game for years, Enslaved: Odyssey to the West is the latest production from developer Ninja Theory. Like its previous game, Heavenly Sword, Odyssey features a strong female character right and centre named Trip, paired with an unlikely travelling companion with an even less likely name, Monkey, who is forced to come along for the ride.

And it’s a brilliant ride. Slotting into the action-adventure category – basically meaning you get to explore, jump around and kill things – the player controls the acrobatic Monkey making his way through environments that look like they’ve suffered an explosion in a Meccano factory. The catch is that Monkey is compelled to take Trip with him, never allowed to stray too far from her for fear of punishment, resulting in a ‘buddy’ mechanic in the game whereby the characters rely on each other to get through each area.

World-class storytelling, voice work and animation, imbue the main characters with entirely credible behaviour that draws you in and generates genuine sympathy from the player for their plights. The facial animation on both is an extraordinary achievement, frankly, with the result that Enslaved exhibits the most realistic expressions and reactions yet seen in a videogame with a degree of subtlety and nuance only previously seen in the best animated feature films. And, perhaps for the first time, we felt real sympathy for them: both Trip and Monkey suffer during the game, and the result is unusually moving.

The superb adventure elements of the game are let down by what amounts to repetitive, uninteresting combat and a limited cast of ‘mech’ bad guys, partially ruining the immersive experience by reminding the player that this is still only a videogame with somewhat uninspired ‘NPC’ (Non-Playable Character) character design as you encounter your hundredth identikit robot leaping on you from above.

While Monkey has a long-range weapon to hand, it only really works well in specific scenarios – mostly if he finds himself in a large, open space littered with things to hide behind and shield-bearing mechs taking potshots at you from elevated positions: stun, fire, fire and they’re history. Otherwise, the robots cover level ground pretty quickly and you soon find yourself overwhelmed, particularly earlier on in the game when you haven’t acquired any upgrades.

Nevertheless, Enslaved is entertaining and compelling, setting the bar for animation excellence even higher than masterpieces like Uncharted 2. It doesn’t hurt that Trip is the hottest videogame heroine ever.

Max Everingham is the owner of Game State, a B2B videogame software analysis & marketing consultancy. Max is a videogames veteran, having worked in the industry since 1996, including senior brand & product marketing positions at EA and Codemasters.
Overall
Performance
Design
Reader Rating0 Votes
4