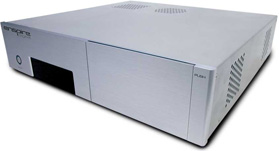 Enspire is a local computer manufacturer that has a reputation for building professional workstations, mainly focussing on the 3D animation and movie industries. With the AVR-200, Enspire brings its considerable experience in building slick professional PCs to the world of living-room based Media Centres, and it shows; the AVR-200 is a well-featured Media Centre that is intelligently designed and skilfully assembled.

Many early Media Centre PCs were not much more than multimedia desktop computers with a Media Centre operating system tacked on. As such, they lacked the style and functionality necessary to integrate into your living room set-up. They also often suffered from being large and overly noisy, especially with conventional PC cooling fans humming away inside. Low ambient noise is an essential characteristic of any home entertainment appliance, and the constant level hum of cooling fans can detract from your television or movie watching experience.

Enspire has paid special attention to these factors, and designed the AVR-200 to integrate seamlessly into your living room setup. The unit itself is fairly small and austere in appearance, with either a brushed metallic or black finish. The front facia is smooth, its uninterrupted lines punctuated only by a single power button, which glows blue when the AVR-200 is powered up. Strangely, the front of the case contains a darkened panel, which looks at first to be an LED display, although it?s actually just transparent tinted perspex. The other front facia features are accessible through a flip-down front panel, which reveals the DVD player, USB and Firewire inputs as well as an audio input and headphones output.

The case itself is also well designed in terms of cooling. There are plenty of vents spaced around the chassis, three of which have quiet fans running behind them: one for the processor, one for the hard disk, and one for the power supply. Even when the AVR-200 is powered up, and all three fans are spinning, the noise levels are very low.

Another impressive design feature is the inclusion of the audio and video connectors on the back of the AVR-200 itself. As Media Centres are based around PC technology most only feature VGA and sometimes DVI or S-Video connectors on the back. If they do support component or composite video connectors, these are often served through an external module, which increases the number of cables and clutter around your equipment. The AVR-200, however, features the full range of connectors built directly into the back panel.

Inside the case, the component mix is impressive. At the core of the AVR-200 are dual high definition digital TV tuners. This is an outstanding feature, as there are no set-top box based hard disk recorders on the market at the moment that support dual HD tuners, making Media Centre PCs the only recourse for the HD junkie. With 2006 proving to be a big year for HD content, with many of the most popular television shows now being broadcast in HD, then a system with the ability to record high definition content is becoming a must.

Unlike the huge Claritas CTS1000, with its incredible 1 terabyte of storage, the AVR-200 has a more modest hard disk capacity. HD television can consume up to 6GB per hour, at the 1080i HD standard with digital surround sound, so you need to have plenty of storage capacity if you want to record and keep more than a few programmes on the disk at any one time. The AVR-200?s relatively small 200GB hard drive will store around 30 hours of top quality HD television, although if you aren?t as concerned about quality, then you can record around 200 hours of conventional SD digital television. Still, if you do want to record lots of HD TV, then you might want to consider a hard disk upgrade, or an external Firewire drive to boost your storage capacity.

The AVR-200 also includes the popular IceTV electronic programme guide (EPG), although you only get three months of the service free, from which point you need to subscribe for $146 a year. The EPG is well worth the investment though, as it lets you take full advantage of Media Centre?s features, such as easily scheduling programmes to record, or searching for television shows by genre.

Overall the AVR-200 is a very slick Media Centre PC. Many Media Centres assembled by computer manufacturers can tend to be a bit too ?computery?, so credit should go to Enspire for putting together a slim, intelligently designed home entertainment device.

Best of all, though, is the price. At only $1,699 it is one of the least expensive Media Centre PCs on the market, yet it incorporates advanced features, such as dual HD tuners and an EPG. In fact, you could buy three AVR-200s for the price of a single Claritas CTS1000, and still have a few hundred dollars left over for a hard disk upgrade. If you?re looking for a compact, tidy Media Centre with dual HD tuners, then the AVR-200 is a top quality choice, and excellent value for money.