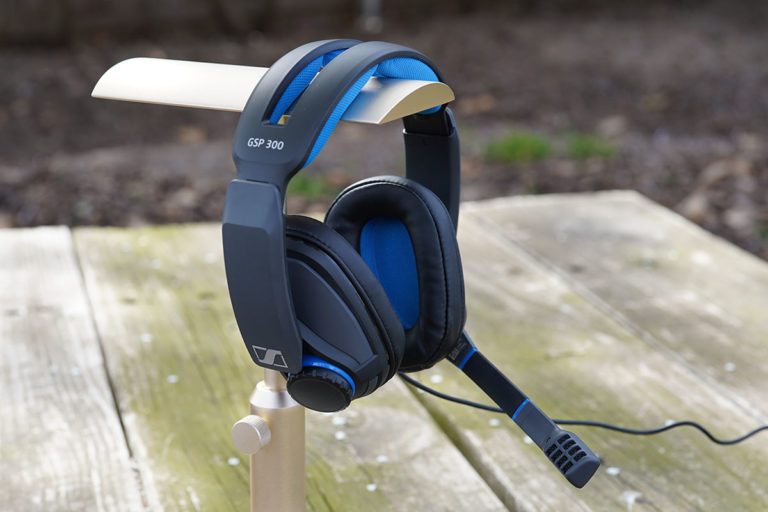 About the EPOS|Sennheiser GSP 300 gaming headset

Basically, the EPOS|Sennheiser GSP 300 (sometimes hereafter referred to as EPOS GSP 300) is a set of closed-back headphones with an attached microphone and a two-metre analogue cable for plugging into a suitable (preferably gaming) source. The box talks about how the headset is compatible with various computers and gaming platforms. But in reality it’s compatible with anything into which you can plug a 3.5mm stereo headphone plug, or 3.5mm microphone plug, or both. Or, for that matter, a 3.5mm TRRS plug for both headphone and microphone, since a short adaptor for that is provided in the box.

I mostly used it with the EPOS GSX 300 soundcard, but tried it out on a regular notebook computer headphone/microphone combined socket using the aforementioned adaptor.

EPOS doesn’t say much about the drivers in the headphone. I couldn’t even find a mention of their size, although the company does say that the headphones have a frequency response of 15 to 25,000 hertz, an impedance of 19 ohms and a “Sound pressure level” of 113dB. I figure that last figure isn’t the headphone sensitivity, but the highest overall output Sennheiser is comfortable with specifying.

The microphone is in a non-removable boom arm on the left side. This swivels up and down to get it out of the way if you don’t need it. When you lift it above a certain point, it switches off. This is rated at an impressive frequency response of 10 to 24,000 hertz.

The headset is finished in black with blue highlights, is quite light on the head, but does impose a fair amount of pressure to the head around the ears.

The closed back construction limits sound from the surrounding environment.

I guess it was a bit unfortunate that before coming to this headset, I had been listening to music using headphones that remain, for now, my favourites. To be fair, when new they cost something like ten times as much as the EPOS GSP 300 gaming headset. So it was kind of like jumping into a Commodore after being thoroughly acclimatised to a Mercedes limousine. The listening experience suffered a little as a result.

But not too much at all, surprisingly. For music, the presentation was laid back, with a strong upper bass and midrange, falling away a little in the upper midrange and treble. That made for a relaxing listen. Everything was there, from the finest tsk-tsk on a jazz cymbal to a solid bass guitar. But that tsk-tsk was a bit further back in the mix than is usual for headphones … and certainly compared to high-end Sennheiser headphones aimed at the music listener. And that, as I said, made for comfortable listening.

Billie Eilish’s track “Xanny” had a nicely strong and balanced mid-bass, but despite the claimed 15 hertz bass extension, it didn’t really seem to have the solid, deep bass underpinning that would imply. Oh. But that’s turned out to be a lesson for reviewers: check your connections. I’d been doing that bit of listening using a direct analogue connection to the notebook computer. But when I switched to the EPOS GSX 300 external soundcard – review to come — things improved noticeably. In particular, the bass took on a significantly greater authority and some more depth. It still lacked, I’d guess, the octave or so of extension to fully realise the bass on this track, but with a decent front end this was considerably less noticeable.

Moving to movie sound, again that comfortable aspect was retained. Dialogue was clear, as was location on the sound stage.

Now you may ask, why am I not writing about how the headset works with a first person shooter, or some other exciting game for which this headset is clearly designed? For the millionth time I must confess that I’m not much of a gamer. But I am also a strong believer in the ideal that a set of perfect headphones would be equally perfect for gaming, movies and above all music.

In fact, the audio performance of the EPOS GSP 300 headset is rather more than merely adequate. Could it be better? Remember, the EPOS GSP 300 (and 301 – the white version – and 302 – black) is the entry level model. At the top of the EPOS/Sennheiser heap is the GSP 670 headset, priced at more than triple the price of these ones. Clearly EPOS reckons that better is possible. I agree. You can do better in sound quality, but probably not at this price.

That brings us to the boom microphone. It was … adequate. It was perfectly good for others to understand what you’re saying. Indeed, it was very clear because it kind of narrowed down the sound range to that most conducive to spoken communication.

But the bass clearly rolled off early and extensively. To double-check my impressions, I plugged in the Rode NT-USB Mini microphone. Yes, this recorded my voice with authority and a real accuracy when played back using the EPOS GSP 300 headset. The headset’s microphone was definitely a little thin.

Does this matter? Not particularly, I’d submit. For gaming purposes you’re merely using it to speak to your confederates and the tonal shaping of the microphone pickup seems to be biased towards clarity. But for high fidelity recording, I’d say no to the microphone in this headset.

I did experiment for a while with trying the bend the boom closer to my mouth, with the aim of employing the “proximity effect”. But while bass was brought up somewhat with this close mouthing, it was impracticable to hold the boom in while playing a game. The boom was only momentarily flexible, wanting always to return to its default position.

As such, it offers good value for money and should be reliable for many years. And since it’s entirely analogue, it’s compatible with everything.

Features
Value for money
Performance
Ease of use
Design
Well built
Compatible with everything analogue
Comfortable listening experience
Microphone not removable
Not much bass from microphone
4.3