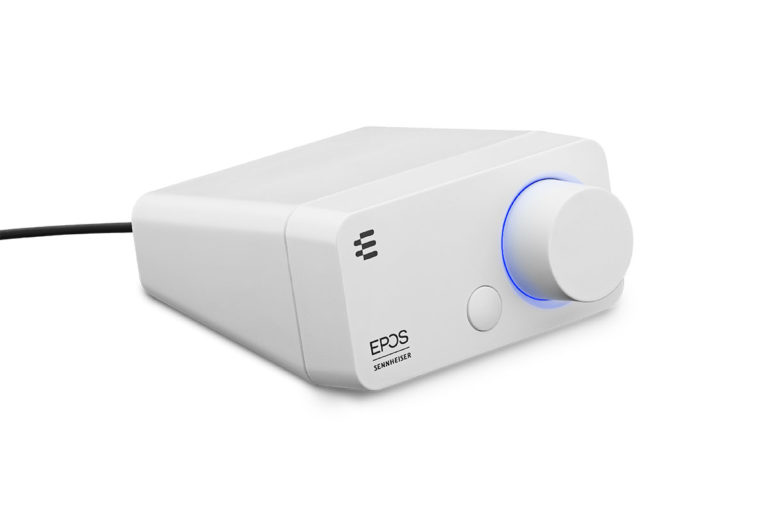 The EPOS|Sennheiser GSX 300 External USB Sound Card is from the new EPOS gaming brand. It is a little device, intended to improve on your computer’s audio performance. And an improvement in sound quality is most certainly something most computers can benefit from.

The GSX 300 External USB Sound Card is a neat little device, less than 100mm on its longest dimension. You plug it into a USB port on your computer and it will become a DAC and ADC – Digital to Analogue converter and Analogue to Digital converter. On the back are two 3.5mm sockets, one for a microphone and one for headphones. Or, of course, the two of them together for a gaming headset. Also on the back is a Micro-B USB socket. You plug this into a computer with the supplied cable, the other end of which has a standard USB Type-A plug.

On the front is a large level control with an illuminated ring around it and one single control button. Using the EPOS Gaming Suite software on your computer, you can adjust the EQ of the output and input both. You can switch between straight two-channel playback and simulated 7.1 channels. On the microphone side, you can control noise cancellation, set a noise gate and set the character of voice to standard, “warm” or “clear”.

The unit is powered via the USB connection, so there’s no wall wart. All in all, it’s a neat package.

The GSX 300 External USB Sound Card is fairly light on for formal specifications. All it says is that 24-bit, 96kHz sampling is supported, along with 16-bit, 48kHz in 7.1 channels “with EPOS Gaming Suite”. And that the recommended headphone impedance is 25 to 75 ohms.

In addition to the black unit, there’s a white “Snow Edition”.

It’s hard to see how it could be easier to set up a sound card. No drivers are required on Windows 10 or Macs. I don’t have a computer with an earlier version of Windows so I couldn’t check for USB Class 1.0 Audio compatibility. But it certainly installed easily on both Windows 10 and Mac with no particular settings changes.

When I first installed it on Windows 10, Windows reported that the EPOS |Sennheiser GSX 300 External USB Sound Card supported 16- and 24-bit audio at 48kHz and 24-bit audio at 96kHz sampling. Full stop. CD-standard 44.1kHz wasn’t listed. Later, after I’d upgraded the unit’s firmware to version 60, the Windows audio control panel was locked at 16 bits and 48kHz. But on a Mac the original options were still available. Go figure.

As we’ll see when I get all nerdy later on, the hardware actually supports a much wider range of sampling rates. EPOS is promising higher sampling rates in the future for 7.1 channel audio, so clearly the firmware is still a work in progress.

In addition to allowing the adjustments mentioned above, the EPOS Gaming Suite also manages the unit’s firmware.

I used the GSX 300 for a couple of weeks without bothering with the Suite. Which was probably just as well, because when I did install the suite and let it have its head with the firmware update, it hung part was through. Since the installation panel insisted that I “not remove device or close Gaming Suite”, I was kind of stuck. The progress bar indicated that it was maybe fifteen percent of the way through, and nothing was happening. I let it be for a couple of hours, but eventually I just pulled the USB cable to see if perhaps it had completed. It hadn’t. The unit was semi-bricked.

Semi-bricked? The hardware was fine and it still worked as a DAC and an ADC, but it had amnesia. It no long had the manufacturer name of Sennheiser and product name of “EPOS GSX 300”. It was now Conexant and “Hi Res USB-C AUDIO”. The front ring no longer illuminated, and the volume control had no effect.

I contacted the EPOS people and it turns out they had a small app to re-install the firmware. This worked perfectly, installing version 59. The EPOS Gaming Suite wanted to upgrade it to version 60. I let it go and this time it worked perfectly, upgrading the thing in just a few seconds. Unplug and re-plug and it was now working perfectly on version 60.

So? Why do I bother to relate all this? Because that Hi Res USB-C AUDIO interlude gave a rare window to peer more deeply into the hardware. While it was in that state, Windows reported that the EPOS GSX 300 now supported 16-and 24-bit audio all the way from 44.1kHz to 192kHz sampling. Not quite trusting this, I ran a frequency response test using 192kHz sampling. Yes, it was definitely sampling at that, with the output frequency response extending to 85kHz! It was weird, though. The shape of the high frequency adhered to three different curves for no particular reason I could discern. The best curve had the output down by just over 0.5dB at 85kHz, the worst at 2.5dB at 85kHz.

Clearly the EPOS GSX 300 External USB Sound Card is capable of far more performance than is currently enabled in the unit’s firmware. Perhaps we’ll see that realised at some point.

Since EPOS recommends a range of headphone impedances between 25 and 75 ohms, I quickly grabbed first some Focal Elear headphones (80 ohms) and then Beyerdynamic Amiron Home headphones (250 ohms!) The unit drove both quite nicely. The Beyerdynamic headphones have a slight zing in the upper midrange that can be distracting. Pulling down the 4kHz and 8kHz bands in the Gaming Suite EQ nicely tamed that.

Indeed, as I’m writing the soundtrack to Hamilton is streaming from TIDAL on those very headphones. I’m finding the bass nicely controlled and all detail in the recording present and accounted for. It’s a fun listen. I should note that the volume is nice, involving and the result is pleasingly dynamic. But the volume knob is at one hundred percent. There’s no more turning up available.

The Focal Elear headphones are significantly louder – indeed, with the volume at the same elevated level they’re uncomfortably loud. Turning the EPOS GSX 300 External USB Sound Card down to around 80 out of 100 roughly matched the volume with the Beyerdynamic headphones. The output is plenty high enough for most modern high-sensitivity, lowish-impedance headphones and earphones.

But, oddly, not really enough for the EPOS GSP 300 headset. The microphone on that worked fine, but when I played music, it simply wouldn’t go to a sufficiently high level to be fully pleasing. That was kind of surprising.

Because 44.1kHz sampling isn’t natively supported by the EPOS GSX 300 External USB Sound Card, I had to run all audio through Windows’ resampling algorithms rather than delivering bit-perfect digital audio to the soundcard.

The 7.1 channel feature added a nice kind of surround-sound effect. Gamers will enjoy it, most likely. The little button on the front of the unit can be configured in the EPOS Gaming suite to either cycle through saved profiles – that includes your EQ settings. Or you can change it in the suite to switch between two and 7.1 channel sound. For some reason it would not work properly with this. When I pressed the button, the LED ring around the level control would switch from blue to red, indicating the change, and the setting in the EPOS Game suite would also change. But the sound wouldn’t. It remained in two channel mode.

Could the insufficient output with the GSP 300 headset be due to the firmware upgrade? I did most of my careful listening using version 60 firmware. But I happened to have measured both before and after the upgrade (and, as my nerdy interlude above notes, between the two as well). The maximum output was down by around 1.8 decibels after the firmware upgrade. Before, the unit could output around 1.9mW into 300 ohms and 20mW into 16 ohms. For comparison, an Apple Lightning dongle for an iPhone can produce 3mW and 25mW respectively. After the upgrade, those outputs dropped to 1.2mW and 13mW.

With 48kHz sampling, the frequency response conformed to two different curves for no obvious reason. In both cases the output was strong out to above 21,000 hertz. With one curve it was down by 0.2dB at 20kHz, with the other it was down by nearly 1dB at the same frequency. The difference was probably inaudible. But it was odd that there were those unpredictable differences.

And with 44.1kHz sampling the results were all over the place, again unpredictably. One measure on a Windows computer and another on a Mac had the response flat out to 20kHz – well, -0.2dB at that point. But many others had the output rolling off from about 8kHz, to be perhaps five or six decibels down at 20kHz.

The EPOS GSX 300 seemed very ready to pass through any electrical noise it received via the USB connection. When the Microsoft Surface Pro into which the EPOS device was plugged was running without being connected to the Surface Dock, the EPOS GSX 300 External USB Sound Card managed a signal to noise rate of around 107dB, A-weighted, with 24-bit audio. That’s a quite solid performance. But when the Surface Pro was plugged into its dock, so it was collecting electrical hash from the network connection and power, the SNR fell to a mediocre 83-ish decibels.

Look, I’m coming at this from something of an audiophile perspective. I think gamers will find the EPOS GSX 300 simply excellent. It sounded pretty fantastic with quality headphones. And the price is excellent: just $129.90.

Features
Value for money
Performance
Ease of use
Design
Neat package to get sound out of computer
Excellent control app
Lets a bit too much noise through from connections
Could do with higher output level
4.4