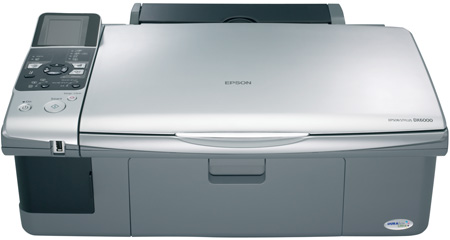 The CX5900 is a photo-centric multifunction device. It’s a touch slower than many other MFCs, and it lacks fax capability, but it makes up for this with some very good photo prints. Just make sure you let them dry first.

The CX5900 covers three of the four common bases in multifunction devices, offering printing, scanning and copying, but leaving faxing off the table.Â  The visual design of the printer is quite pedestrian; grey and silver plastic abounds, with the scanner bed sitting to the left of the control panel that includes a 5 cm LCD panel for previewing shots when loaded into the CX5900’s memory card slots.

The included software covers standard driver applications for printing and scanning, along with Epson’s Creativity Suite, which acts as an umbrella for a number of utilities, including easy photo and web page printing applications. The one downside to this wealth of applications is that it takes a solid amount of time to install everything, with plenty of agreements to click through, and an annoying clicking ad banner touting Epson products in the background while you wait.

The CX5900 uses four ink cartridges (Black, Cyan, Magenta, Yellow) which install side by side under a hood that moves out when the install process is initiated. Unlike many other MFCs, this is something that has to be user-initiated; many printers make the cartridges available as soon as you pop the hood up.

Defining the CX5900 is pretty easy; it’s really a photo printer that’s had multifunction bobbins added on, and if photo printing with just the occasional bit of copying and scanning is what you’re after, it’s not a bad mix. The downside to this approach is that, like many photo printers, it’s not the speediest little beast on the block; even printing plain black documents was slower than on comparable MFCs.

Epson rates the CX5900 as being capable of up to 27 pages per minute in black draft mode. As with most printers, that’s a best-case scenario based around a single page design only, and only in draft mode. Our tests with the CX5900 revealed a rather more sedentary pace outside draft mode, with the first print of a black full cover pageÂ  (always the slowest page while the printer stores the document in its memory) taking an average of 55 seconds; subsequent prints were ejected roughly every 30 seconds thereafter.

The CX5900 was likewise relatively slow for full-colour photo printing, although we were impressed with the overall visual quality of the photo prints, as long as we were using Epson paper. It’s a common problem with many photo printers that utilise inks which work in best combination with particular paper types, and it was quite marked with the CX5900. The moment we shifted to a cheaper generic paper type and changed the paper selection for the printer accordingly, we produced photos that were markedly less vibrant, and on one occasion, a print had to be left to dry for quite a while, as it smudged passing through the print mechanism.

The CX5900 best suits those who want to primarily print photos – and here its quality excels – but who have a reasonable amount of patience otherwise, as it’s a slower printer in most other respects.