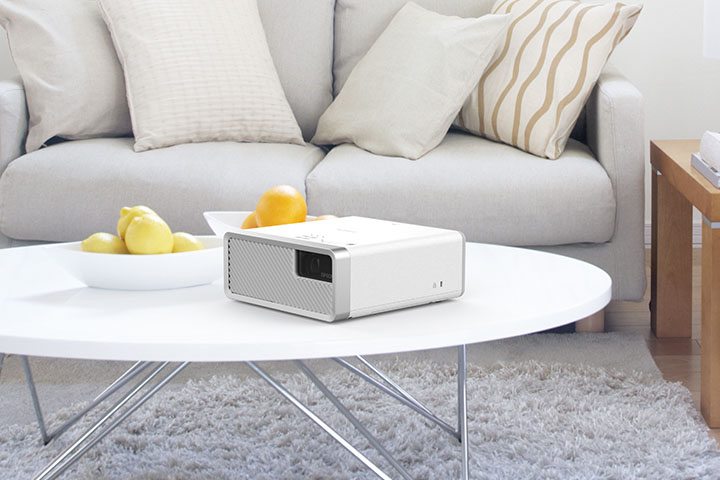 Before getting to that, I should mention that there’s also an Epson EF-100W projector which is identical, except that it is finished in white and has silver highlights (pictured above). The Epson EF-100B is black and has copper highlights.

This projector has been designed with ease of use in mind. It is stripped down to essentials, and presented in a nice rectangular package that’s only 210mm wide, 227mm deep and 88mm tall. It feels like a brick, weighing 2.7 kilograms.

The lens is inset into the body. It doesn’t zoom – there is a digital zoom, but that just scales the image down to a smaller size. The net effect is reduced resolution. Both vertical and horizontal keystone adjustments are provided. These can be used to straighten up the image if the projector has to be placed at an angle. Again, these reduce resolution.

As you may have by now sensed, I am against anything that reduces resolution, so I’d strongly suggest that the projector should be placed in the right position, square to the projection screen. For a 100-inch screen, that’s at a distance of 3.05 metres, raised slightly above the bottom of the screen.

That’s me being all purist, of course. Clearly, Epson expects the Epson EF-100B projector to be used in an ad hoc way, projecting against a wall or other convenient flat surface.

For, for that matter, against a ceiling.

Most projectors use an incandescent lamp as their light source. A powerful one, of course, carefully designed to produce the right colour of light for the best final result. But because they are powerful, they are also fragile and they tend to expire after a few thousand hours of use.

And they generally have to operate with the projector placed horizontally, either on a desktop or upside down attached to a ceiling mount. Run them at other angles and it puts life-shortening stress on the lamp’s filament.

The Epson EF-100B employs the much newer LED/Laser technology. These generally work as follows: a powerful LED laser emits a narrow wavelength of blue light. That strikes a carefully chosen phosphor which responds by glowing brightly with white light. So, it’s a solid-state lamp and thus more robust (although usually a ring of phosphor is used on a spinning wheel to help manage heat).

You can put the projector so that it fires directly upwards, or put it on its side so it’s running in portrait rather than landscape mode.

Another advantage of LED/Laser lamps is fast on/fast off. They can generally switch on and off instantly. With this projector, it takes five or six seconds for the electronics to get going.

The Epson EF-100B appears, at first glance to have no inputs. But there’s a panel on the back which can be removed. Behind that is a space for the built-in speaker. Also in there is a HDMI socket on a short cable and a USB Type-A socket, intended for providing power for accessories. The review unit already had inside an Amazon Fire TV Stick. There’s enough space in there to instead use a Chromecast device.

A hole on the side also lets you feed in a HDMI cable. That’s how I used it, feeding content from my UltraHD Blu-ray player (at full HD resolution). But I really like the idea of being able to tuck a wireless streaming dongle away inside. There’s something cool about being able to just plug the projector into power and then use your Netflix or whatever app on your phone to send movies to it. It would also work fine with the Microsoft Wireless Display Adaptor.

The projection engine uses three LCD panels. These provide WXGA resolution: 1,280 by 800 pixels. If you’re watching regular consumer content from DVD, Blu-ray or a streaming service, you’ll be getting 1,280 by 720 pixels, with thin black bars above and below the picture.

Can you see now why I’ve been so funny on the question of resolution? As it is, Full HD content is downscaled to 720p, so there really aren’t too many dots to waste.

The projector accepts signals up to 1080p60.

I’m trying to remember the last time I reviewed a projector with less than full HD resolution. It must be more than ten years. I’d kind of forgotten precisely what an – effectively – 720p projector delivers. It turns out to be a large, but somewhat soft picture. The lens is easily sharp enough to provide a very detailed image to the point that the grid pattern between the pixels is easily discernible. That’s the so-called screen door effect.

Clearly that reduces the subjective experience, so the trick with a projector like this is to sit far enough away from the screen so that the lines are no longer visible. With an 80-inch projected image, I found a four-metre range good.

Again, the purist in me would have liked Epson to use 1080p LCD panels. I imagine there are technical reasons why it couldn’t. Perhaps they wouldn’t fit properly into such a compact device.

Anyway, the scaling of the image to match the projector resolution was generally pretty impressive. Going from 1080p down to 720p, there wasn’t much loss of detail. You’re still going to get clear picture quality advantages watching Blu-ray rather than DVD with the Epson EF-100B projector.

Where it was weaker with interlaced content: 1080i50 and 576i50. It was too inclined to treat those as video-sourced, even when they were inherently progressive. The result was breakup of some fine picture detail and softening of the image, along with some other picture artefacts. I’d suggest setting your source devices to progressive scan output if possible. Odds are they’ll do a better job.

Epson specifies the output brightness at 2,000 lumens and the contrast ratio at an impressive 2.5 million to 1. The image was certainly bright. Even under my office lights it was clear in Cinema mode, which only runs the lamp at 50%. In Dynamic mode it goes to 100% and is even clearer.

But of course – again, ever the purist – the way to use a projector is in a dark room. Even then I found the “Cinema” mode not to my liking … but I rarely do. I generally choose “Standard” or “Natural”. This projector has a “Natural” mode. It gave a good, um, natural, colour balance but ran at 80% output. I preferred to bump that up to 100%. The cooling fan is a little louder in that mode but it was worthwhile for the richer picture.

If you like colour to appear in a particular way, there are plenty of settings available in the menus. The panels support 10 bits of colour processing, so you’ve got more than 16 million colours to choose from.

The huge contrast ratio specification is a “dynamic” measure. That is, the projector can brighten or darken its output from scene to scene. I think it adjusts the brightness of the lamp, rather than employing a dynamic iris. It was silent in operation (you can usually hear a quiet chirruping of a mechanical dynamic iris).

Dark scenes were delivered smoothly and was a good sense of overall darkness, while light details were retained. Sitting at the correct range, the overall impressive of black levels was more than adequate to sustain a realistic image.

The Epson EF-100B is a neat package capable of delivering a decent quality image to a large surface. Its particular virtue is the LED laser light source, which makes the projector more versatile and gives it a very long maintenance-free life. But the cost is the less-than-1080p resolution.