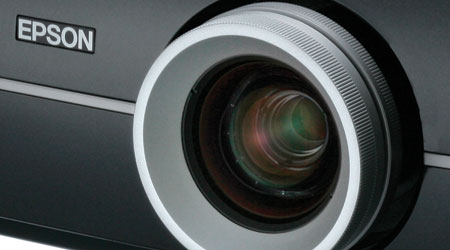 Epson presently has six home theatre projectors available in its Australian line-up, three of them offering full high definition resolution. The top two: the EH-TW4500 and the EH-TW5500 are very similar to each other, with the $500 more expensive TW5500 offering only a few more features, so in a sense this review covers both models.

The three things that distinguish them is that the TW5500 has a longer warranty, has an aspect ratio setting to support external anamorphic lenses used in some ‘constant image height’ projection systems, and has special picture presets in which a professional can store Imaging Sciences Foundation (ISF) settings after a careful calibration.

Everything else is the same: the full high definition resolution, the horizontal and vertical lens shift, the massive 2.1:1 zoom range, the 12 volt trigger and RS-232C port for system integration, the 4000 hour lamp life, the motion smoothing frame interpolation system.

Epson brings several elements to projector design that are matched by few, if any, of its competitors. In particular, it designs and builds its own LCD panels, and its own lamps (the UHE-E-TORL), rather than buying them from a third party. So the design of the parts is made with a view to how they will all be put together in the final product.

It makes a particular point of noting that at its maximum output level of 1600 lumens, the projector’s light is a properly balanced white, rather than biased by some colour tint.

Occasionally I get to review projectors costing four or more times as much as this one and each of them has their own point of interest. But as overall packages, I generally find myself judging them against this Epson projector, and not altogether favourably.

In fact, the review projector was superb in just about every way. One potential problem with three-panel LCD projectors is misalignment between the panels, but with this one the colours were exactly overlaid right to the very corners of the picture.

The colours themselves were quite acceptable at the default settings, but there was sufficient adjustment to allow them to be tweaked to greater accuracies. As mentioned, an ISF calibrator can do this with instruments and then save the settings in special presets.

The picture scaling was immaculate. HQV progressive scan conversion and image scaling remains the best in the business. Its ‘Auto’ settings did a near perfect job, but there were also manual settings should you wish to do fine tuning yourself.

The claimed contrast ratio of the model that this projector replaced was 72,000:1. For the EH-TW5500 it’s 200,000:1. Perhaps these extreme levels can be measured, but the real working result was not so much that the black levels of the 5500 were deeper, but that the ‘dynamic’ contrast system was better tuned.

The blacks are so good that I doubt that they can, in fact, get better. The ramping of the dual automatic irises avoided any kind of ‘pumping’ effect in brightness. In other words, the improved tuning of the dynamic system left it doing its job of improving the subjective contrast in the picture, without being at all noticeable in its operation.

I criticised the previous model for taking far too long to acquire the signal and produce a picture whenever the signal standard changed. It was so slow that if you were using a device that required confirmation within ten seconds after a resolution change, it was touch or go whether you’d have time.

Epson has improved this considerably. It isn’t the fastest, but not the slowest either. Typically it took a reasonable four seconds to switch (the fastest projectors halve this).

With the EH-TW5500 home theatre projector, Epson has continued on its path of raising the performance bar, model by model. It is now so good that until there is some radical new technological development (eg. 3D), it’s hard to see how it could be improved.