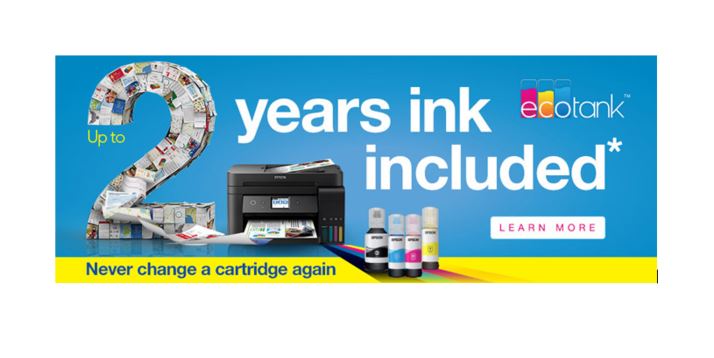 The figure may not sound impressive, but it is when you realise that EcoTank printers cost more upfront. Its economy comes from the ludicrously low running costs. In fact, we could sub-title this article “And still have not sold any refills.”

Epson introduced the refillable ink tank printer in October 2010 in Indonesia. Let’s just say Asia, in general, is infamous for its use of third-party inks and cartridges. It even went as far as having a thriving ‘conversion’ business from disposable cartridge printers to rudimentary ink-tank ones.

Since then Epson has introduced the ink tank printer to 150 countries. While printing on paper may be on the decline the ink tank market is growing. Epson plans to sell 9.5 million (nearly a third of the total over seven years) in this financial year alone – a growth of 20%. It will represent about 55% of its total inkjet printer sales.

What is an EcoTank ink tank printer?

Traditional inkjets use a heating system to expel ink via nozzles. That is why you lose so much ink as a print head purges its nozzles. Particularly if the printer has been turned off.

These combine cyan, magenta, yellow and black ink (a couple of grams of each) with very expensive disposable print head cartridges. A typical replacement set can cost more than $100 and a colour A4 page around 50 cents each.

This has up to three times the nozzle density and uses a piezo crystal to fire up to 50,000 times a second. This also allows for a greater choice in ink types (Dye, Pigment etc.).

The PrecisionCore head does not need replacement over the life of the printer. All you do is top up the ink tanks. By comparison, a typical set of refill bottles costs under $70 and cost around a cent per colour A4 colour page.

GadgetGuy’s take. EcoTank is the way to go

To be fair Canon and HP have similar ‘continuous ink supply systems’ (CISS).

Where Epson is different is that it only makes ink-based printers. In a recent interview with Epson’s Bruce Bealby, he as much said that he wished all printers were ink-tank to start with as it would have removed so many cost barriers to printing.