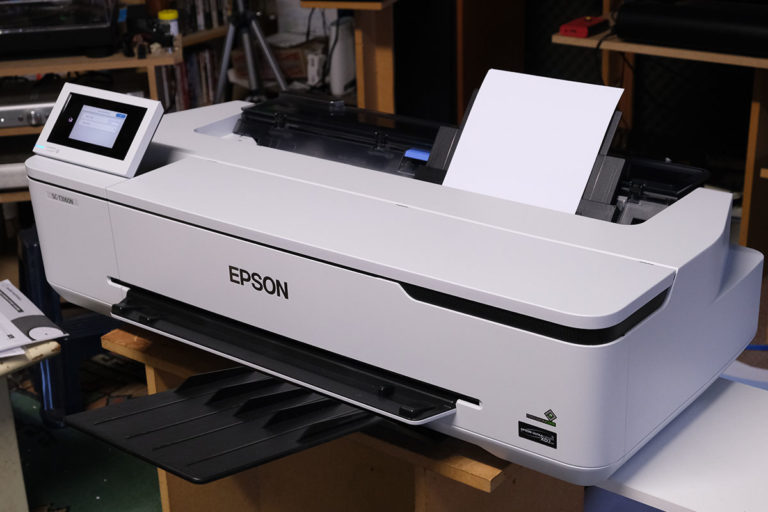 Hey, that’s not a printer. This is a printer. The Epson SureColor SC-T3160N printer is to regular printers what Crocodile Dundee’s bowie knife was to the knife wielded by the punk.

What is the Epson SureColor SC-T3160N printer

It’s part of Epson’s SureColor Technical series. It’s not really intended as a photo printer, but more for large prints. Such things as posters, presentations mixing text, photos and graphics and so on. As to size, the Epson SureColor SC-T3160N printer has a 24-inch wide carriage and is primarily intended to print on rolls of paper. So it can produce prints up to 610mm on one dimension and tens of metres in size on the other. There’s also an SC-T5160 printer with a 36-inch wide carriage (914mm).

There are several variations on the Epson SureColor SC-T3160N printer. The “N” stands, I imagine, for “no stand” because the Epson SureColor SC-T3160 N-less printer available directly from Epson costs $1,695. It comes with a purpose-designed stand with wheels and an incorporated print catch area. It seems that the desktop version – the subject of this review – is available principally from Officeworks for just $1,209. You can pick up the stand there as an optional extra for $299.

(Quibbling about my use of the word “just” for the price? I think it’s astonishing that you can get a pro-level, A1-capable printer for $1,209.)

Big paper means big printer. It’s 970mm wide by 460mm deep and 240mm tall. Additional room is needed at the front for the prints to emerge, and above and (a little) to the rear for the various things to open up. Weight: 27kg.

There is an important accessory that you will need – Epson doesn’t provide one of these with the printer – in order to properly and safely set up the printer. That accessory is a second human body. The T3160N is large and quite heavy. I didn’t have one of those to hand but still managed, with some care and strain, to get the printer in place on a low table. If you don’t get it with the stand option, it needs a surface of at least 300mm depth and 720mm width upon which its four feet may rest. I had to put a larger board on my table to meet that requirement.

That done, the first step was to methodically follow the setup manuals instructions on preparation. There was lots of blue residue-less tape holding various things in place, including a few plastic or polystyrene supports, all of which had to be removed. It was easy enough. Then, you power it up and install the four ink cartridges. Again, easy enough. The combination of the setup documentation and the display guided me through the process. That done, the printer had to do some preparation of its own. It announced it would take 18 and a bit minutes to complete the process, but I think it may have done it a little faster than that.

Amongst other things, it had to “charge” itself. That, basically, means filling its pipes with ink all the way to the heads. There may have been a little head cleaning as well.

The cartridges supplied with the printer are the smaller of the two sizes: 26ml for the colours and 50ml for black. By the time the printer had finished charging, around 80% of the black remained, but only around half of each of the three colours. It’s probably best to buy some of the larger cartridges – 50ml each for the colours and 80ml for black – at time of purchase.

Try to economise by getting refills from somewhere? I didn’t go looking, but I doubt you’d be able to find any for this printer. It’s a bit too specialised. Anyway, look, if you spend $80 on a printer and want to chance low-cost refills to keep printing on the cheap, well, I get it. But would you want to take a chance on clogging this printer’s pipes?

Of course, you’re not tied to using Epson’s paper. You can use any paper – including fancy glossy photo paper – in the cut sheet feeder. Standard paper rolls – 40 metres – are priced at $129. The heavier 180gsm rolls are shorter – 25 metres – but cheaper at $89. Premium glossy rolls run to 30 metres and $199.

After the physical installation it’s time to install the printer drivers. There’s a CD in the box, but there are also instructions on how to install from the web. In fact, the install app on the CD went and checked online anyway and installed a more up to date version of the driver. I had it connected via Ethernet, but you can also use Wi-Fi, Wi-Fi direct or USB 3.0.

You make most of your print settings using the 4.3-inch touch sensitive LCD panel on the printer. This can be tilted up at whatever angle is convenient for the user. It was clear and responsive. Loading the paper was straightforward. You just slide the leading edge under some rollers and push it in until the printer beeps. The roll holder just pops in and lifts out easily. If you were wanting to switch paper types frequently, it’d be worth purchasing extra roll spindles, since putting the roll on the spindle was the slowest part. They cost $169 each.

The driver has an easy-to-understand interface. Since the printer is extremely flexible in terms of output size, you’ll probably want to experiment a bit. But for the most part the driver picks up settings from the printer, so all you need to worry about is setting the orientation and resolution that you want. Physically, the printer offers 2,400 by 1,200 dpi resolution. But thanks to the 800 dots in the print head for each colour, printing proceeds at a decent clip. In high speed mode you can get an A1 sheet out in 34 seconds. Using the highest quality setting on glossy paper, the printer took a couple of minutes.

I had some cheap-brand A4 glossy photo paper to hand, but the results were not very good. Too cheap, I think. Some of the ink soaked in, causing some buckling. The same photo printed to the same size on Epson glossy paper on a roll came out looking smooth and effective.

The results were really impressive. I printed out some a world map from Google Maps to a very large size on plain 115gsm Epson paper. The blocks of colour were smooth, completely without banding or visible joins. Truly presentation quality.

Photos onto glossy paper were very nice. Remember, the Epson SureColor SC-T3160N printer isn’t really directed at photography, but it delivered smoothly painted and nicely bold colours nonetheless, especially on the glossy roll paper. I examined the results very closely, looking for banding or any horizontal “join” lines. There were none.

I took a high resolution photo of a beautiful botanical print and printed out a very impressive oversized version of it, 520mm wide by 720mm tall. A side-by-side comparison showed a slight colour shift towards red and a slightly lower intensity in the darker parts of the print, but it was still impressive.

When you’re printing from the roll, an automatic cutter slices off your print when it’s finished. If you’re using the sheet feed, you should fit the plastic tray to catch the prints. If they bend over near the end, they can smudge on the body of the printer. The tray holds them up so that doesn’t happen.

There was only one paper jam, but that was because I’d just loaded the roll of glossy paper and I think the leading edge was damaged. The printer didn’t handle it very well. It just churned on printing while increasingly distressing noises came from within. I couldn’t take it so I tapped the “Cancel” button on the display. Then the printer told me there was a jam. It took a fair bit of yanking and wiggling to get the paper out.

I ran down the initial three colour cartridges to see what would happen. I think the printer was supposed to object strongly. It was certainly aware of the levels, with big exclamation marks showing over the low colours. But instead it kept on going. When streaks started appearing on prints, I switched over to a new set.

And, it’s easy to use. Just make sure that you have somewhere to put it. And have a second person handy to help you install it.