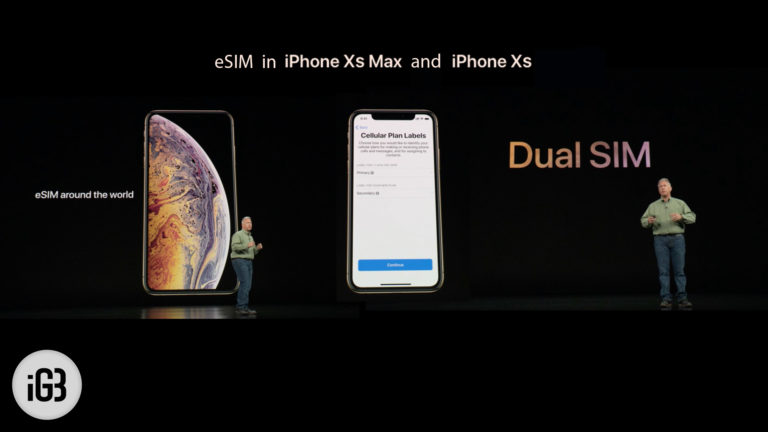 eSIM may free up lock-in contracts

An eSIM is an electronic SIM instead of a physical SIM card. As you cannot remove an eSIM, it needs to be flexible enough to handle different carriers, swap networks, and to reassign it when selling a phone.

Apple uses an eSIM in its Watch 3/4 as well as its new iPhone XS and Max. Samsung has it in the Gear S2 LTE smartwatch.

What is special about an eSIM?

SIM Stands for subscriber identity module. It identifies you to the Telco via a phone number assigned to the SIM serial number. It is how they route calls to you and how they bill you.

eSIM is almost infinitesimal in size compared to a nano SIM. It means more design flexibility as it can get rid of another water/dust ingress point and removes the cost of that assembly. The technology allows for multiple eSIMs on the same silicon as well.

The current Telco (not Apple or Samsung) thinking behind eSIMs is they are good to lock your device to a specific Telco especially those that buy phones on payment plans.

Given that Australia’s Consumer Watchdog frowns on lock-ins of any type will have to be totally open.

That may explain why the Apple iPhone eSIM does not work in Australia. A firmware upgrade is coming – we don’t know when.

Another feature of eSIM (if enabled) is that it can clone an existing phone number. This means you can share one number with many devices. That would be great for a watch, tablet and phone – one account and one data limit. Telco’s don’t like that as they make a lot of money charging for data plans per device that few ever fully use.

An eSIM should be Telco agnostic

That would mean you could change carriers regularly to take advantage of better deals. It also means you could go overseas and get a new number (and redirect your Australian number) in every country you visit. That means a loss to Telcos of hugely expensive roaming costs.

Finally, eSIM could mean the end of stolen phones because it requires you to release the eSIM to someone else to use it.

eSIM is like the car that could get 100 miles per gallon – oil companies were not happy!

eSIM works but many Telcos are placing barriers in the way of its adoption. Why? They don’t want to offer such freedoms to users and lose revenue.

Samsung and Apple are pushing for an open standard via GSMA that represents the interests of mobile Telcos.

That is a great move. It also explains why Apple provided both a physical SIM slot and an eSIM – the latter may take some time to be activated. Interestingly Chinese versions of the new iPhone don’t have an eSIM given pressure from the huge Chinese Telcos.

GadgetGuy’s take. Meanwhile, customers are the losers – yet again.

From what I see the cooperation of all Telcos is far from a given. Many Telcos are refusing to support eSIM devices.

It also needs the phone and Telco equipment manufacturers to agree on a single standard. That is going to take time.

Slowly will be accepted. Initially, we will see it built into laptops, tablets and wearables. Short-term it is unlikely we will see widespread eSIM adoption by phone makers – but the tide will turn.

According to Whistleout, a respected mobile comparison site:

At present, we’re really not sure if Australian telcos will support this, given how cagey they’ve been about dual SIM phones in the past. Apple does not list any Australian carriers on its carriers that support eSIM page.

Interestingly, however, Apple notes that the use of an eSIM in an iPhone may be disabled ‘when purchasing from some carriers’.

On our further investigation, we found Telstra does support the eSIM on Watch 3.0 (and presumably 4.0) for consumers (not business) via a ‘One number’ plan. It costs an extra $5 per month to share the number/plan with an iPhone SE or later on an eligible post-paid contract.

Optus also has a number share plan for Apple Watch 3/4. It clarifies that it won’t work on the 700Mhz band and does not support its MMS and Voicemail services.

We need to push for number sharing across several devices – not just and an Apple Watch and an iPhone.