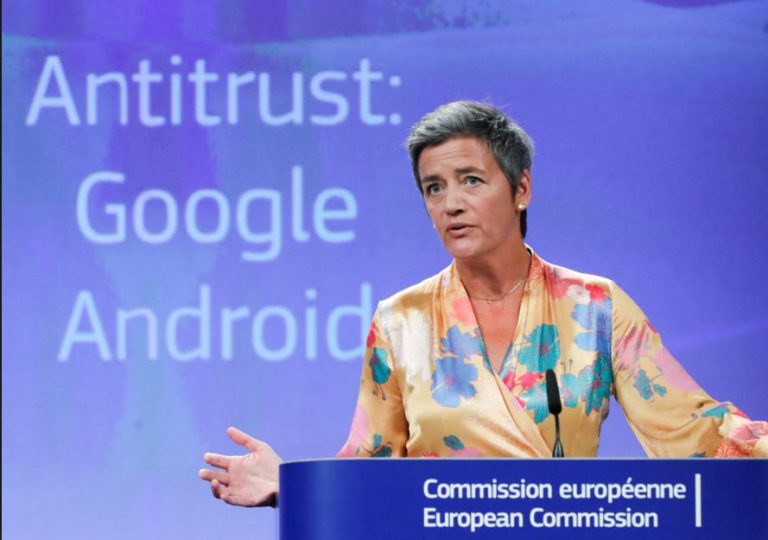 The European Union – EU fines Google 5 billion (US) for compulsorily bundling its Search engine and Chrome Browser into Android. EU claims it is doing this to stop competitors.

“Google has used Android as a vehicle to cement the dominance of its search engine. This practice has denied rivals the chance to innovate and compete on the merits. It has denied European consumers the benefits of effective competition in the important mobile sphere,” EU antitrust chief Margrethe Vestager said.

Vestager also ordered Google to halt anti-competitive practices in contractual deals with smartphone makers and telecoms providers. “Do it within 90 days or face additional penalties of up to 5% of parent Alphabet’s average daily worldwide turnover,” she said.

The EU dismissed Google’s argument of competition from Apple, saying the iPhone maker was not enough of a constraint because of its higher prices and switching costs for users. Android, which runs about 85 per cent of the world’s smartphones. Apple does not.”

“Android has created more choice for everyone, not less. A vibrant ecosystem, rapid innovation and lower prices are classic hallmarks of robust competition,” it said.

The EU, buoyed by the success of its GDRP legislation is now on the prowl for alleged anti-trust infringements.

It has had a go at Google, Intel, Microsoft, Facebook and many more for alleged anti-competitive behaviour.

A decade ago Microsoft bundled its Windows Media Player with Windows. The EU made it unbundle the app so that competitors could get a fair advantage. The EU then ruled that bundling its Internet Explorer browser was anti-competitive. To this day EU citizens have an option of using non-Microsoft browsers.

On the surface, the issue is about anti-competitive behaviour. But Google is equally correct in that forked versions of Android allowing things like use of third-party app stores etc. will weaken this open-source operating system.

Its decision to use its search and browser also has major security implications. Third-party search/browsers may open security holes.

Next would be the EU insisting Google Play Store was not compulsory. It is the one thing keeping Android users relatively safe from malicious apps.

Our take is that the EU and all world governments need to set realistic regulations that the tech giants can then work within. Retrospectively fining them only swells the already stretched EU coffers.

Bring on pure Android (except in China).