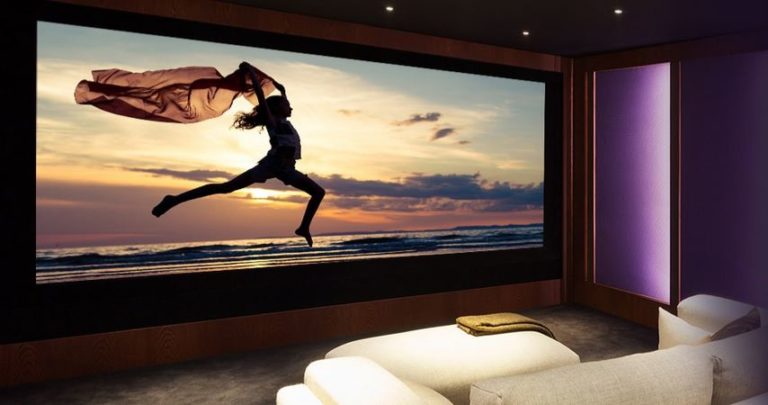 Ironically writing about exciting 2018 tech for any TV will all come asunder once the Consumer Electronics Show (CES) happens from 9-12 January 2019.

CES has become the de-facto home entertainment, sound bar, SmartHome show and we expect great things. This is going to include 8K TV, voice assistants everywhere and the current 7.1.4 Dolby Atmos king of soundbars from Samsung will be yesterday’s news. Look for 9.2/4.4/8 and 11.2/4.4/8 Dolby Atmos Mark II coming. That is sound from up to 11 horizontal planes, 2 to 4 subs, and 4 to 8 upwards-firing speakers. Talk about an immersive soundscape. Cheesh!

As usual, there was much evolution and little revolution in this category during 2018. A few TV trends became clear.

So, to the year in review. Please note that most of the reviews were on 65” TVs.

OLED is best for…

OLED (Organic Light Emitting Diode) means each of the 4K, 3840 x 2160 (8,294,400) pixels is a little individually controlled light. Switch it on (full or infinitely dimmed) or switch it off for perfect inky black. OLEDs have close to an infinite contrast ratio.

But the little secret is that OLED needs to have the best environment to perform. That means no reflective light sources from above or behind the viewer (screens are glossy to enhance colours).

This year we saw LG, Sony, Panasonic and Hisense in the market.Again, a secret – LG makes all the panels, at least for now. So, these TVs all start from a high base.

LG is the master at making larger OLED panels. OLED is a ‘hot’ product, and there are dozens of companies investing in OLED production plants. But it will take time before they can match the size or quality of LG TV panels. It was a wise move to start the Hisense Series X from that high base.

These ratings don’t reflect TV panel quality but a more holistic approach to the experience. Newcomer Hisense had a creditable first go and could easily catch up with the others next year. LG has had nine generations of OLED, Sony three, and Panasonic two.

But, by then it was too late. Without going into things like Dolby Atmos and Dolby Vision (which LGC8 and Sony A9F have), they all did an amazing job. You could only tell the difference if you lined them up side-by-side and stores don’t do that anymore.

By the way, if you own a previous LG OLED model (like I do) do not fret. Picture quality is very similar, but the new models have OK Google and slightly more processing power. You can add OK Google via a Chromecast dongle or a Google speaker. A good OLED should last ten years or more.

Sony Master series A9F  is its sincere attempt to knock the crown off LG. It was good, great even but let’s see what 2019 brings.

While the war rages in OLED to show the ‘best of the best’ there were major steps forward in Quantum Dot LED (QLED), full back-lit (individual dimming zones) and even edge-lit LEDs.

QLED has the advantage over OLED in two ways. First, it can handle the brighter Australian lounge rooms – its colour saturation is not as dependent on a glossy screen. Second, it has no burn-in that can happen to an OLED if a stationary image is left on fora long time. Frankly, image burn-in with screen savers is a non-issue so let’s leave it at that.

And back-lit over edge-lit makes a huge difference to image quality, colours, motion and so much more.

We put the top of the range65” TVs through the test lab. Prices are from JB Hi-Fi or similar. There are even better bargains online.

These scores came from three different reviewers – Thomas Bartlett, Val Quinn and Ray Shaw, so anything above 4.5 is a real winner.

GadgetGuy’ take: Too many TVs

You can get a cheap 65” for less than a grand, but we would not be happy, we could tell! You might be over the moon!

I don’t want to knock those less fortunate who buy a 65”cheapie. These are edge lit, have lower contrast and brightness and slower motion smoothing. Ironically Samsung’s Q9 Studio stand costs three dollars more than a complete Sonic 65” 4K TV at $795.

And buy now – the Aussie dollar is under pressure!