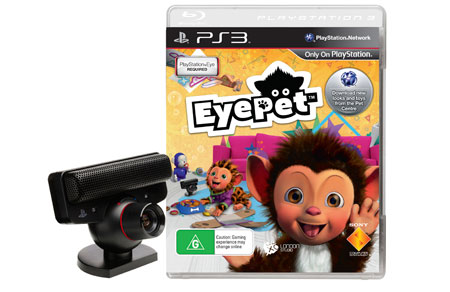 Virtual pets hit somewhat of an apex a few years ago with the brilliant Nintendogs on the DS handheld system, but they weren’t the first and this new, exclusive title for Sony’s PlayStation 3, EyePet, proves they’re definitely not the last. Your EyePet is a pretty cute little fella, a bit of a cross between a monkey and a cat; right at the start, you get to ‘style’ him however you like, and this critical customisation aspect really helps owners identify with their new addition to the family. An excellent series of video tutorials from a mad professor type walk newbies through the process of caring for, and playing with, the EyePet and, aside from the annoyingly mandatory ‘pet care’ elements, there’s a daily series of challenges to complete. Successfully complete tasks and you’re rewarded with clothes and other items for your EyePet.

To make the whole thing work, a lot of the functions are triggered by using the supplied ‘Magic Card’ – a rectangular, plastic card that provides focus for the Eye Camera and becomes the object you use to interact with the EyePet: an x-ray scanner, a feeding bottle, a trampoline and so on. Sometimes it’s not very responsive and you have to be careful to hold the card square-on to the camera (harder for younger kids) but, on the whole, the motion detection works well via the PlayStation Eye Camera. It also picks up sound, allowing for singing sessions with your new buddy, plus he’ll respond to hand claps and other sounds. The singing – and several other challenges – though, come with very minimal instructions and the pickup is patchy, so it’s not always clear what to do, or how to do it, and sometimes it doesn’t work at all! It’s bizarre that you keep having to revert to your PS3 controller, too, and would have been far better if the developers had implemented an onscreen display to activate the menus and so forth.

One of the more impressive aspects of EyePet is the creature’s ability (or rather the camera’s ability) to recognise drawings you do yourself and then create a similar object for EyePet to play with. First, you have to teach your EyePet to draw, which you do by drawing on a piece of (real!) paper yourself and holding it up to the camera for your EyePet to see. Then the EyePet attempts to copy what you’ve drawn. It’s cute, and by trying this with several different EyePets, we’re able to confirm that they’re different every time, as if each EyePet has their own style! Once you’ve unlocked the draw ability, you can draw something and put it right in the game, as mentioned. We tried first with a car, which turned into a 3D, wooden-block car right in front of our EyePet – better still we could then play with it like an RC car, using the right stick on the PlayStation controller! You don’t have to be a great artist to get this working, either, which in our case is a real bonus and you can change your drawings at any time.

Another smart aspect that helps you believe your EyePet is truly aware is when something unexpected enters his area on the screen. A sudden invasion from our Mini-Dachshund prompted EyePet to scamper over to investigate, and a sudden turnaround by our real pet knocked the EyePet onto his back!

As with all pets, the enjoyment is spread out over months and years, and not just a few days’ worth of playing. So while we’ll score this ‘title’ here, whether you want to own an EyePet for yourself will probably come down to how much you’ve enjoyed previous pet videogames or whether you think having a virtual monkey thingy running around on your TV screen is a good use of your PS3. For us, it’s diverting for a good while, but the apparent need – or rather game designer fixation – on having to attend to the more mundane aspects of having a pet, like washing and feeding it or else the fragile little thing will expire, reminds us of our Tamagotchi days. And that’s not really a good thing. Loading times, too, are long and too frequent and this really hampers enjoyment, as you trawl through processes repeatedly to get things to happen.

Still, having a pet for your PS3 is fun, the technology is undeniably interesting and it’s a great drawcard for the kids, who’ll immediately be entranced by the cheeky little critter skittering around on the TV. While writing this, my 5 year old just declared the game: ‘the bestest game I’ve ever played’. As a ‘fun-for-the-family’ title, EyePet is a winner – just don’t let the kids near it until you’ve finished Uncharted 2.

The price given at the top of this review, $79.95, includes the game and the PlayStation Eye Camera.