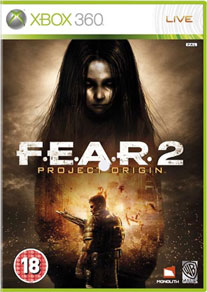 The number of videogames that are genuinely scary can still, after over 30 years of releases, be counted on one hand. F.E.A.R. 2: Project Origin, a run-and-gun shooting game that is conventional in almost every aspect, aims to increase that count by combining the formulaic ‘first person shooter’ game play with psychological horror elements but, unfortunately, falls just short.

That isn’t to say Warner Interactive’s new game doesn’t have moments that make you jump – there are a few, and generated not only through the usual ‘blind the player then throw something up at him as he rounds the corner’ formula employed by similar games out up for a fright but, rather, through some slightly smarter use of pacing, lighting and eerie imagery that flashes before your eyes only for an instant. The problem is that these moments are few and far between and the more continual attempt that relies almost wholly on that last element – spectre-like flashes of gory imagery that shudder into view every few minutes – gets tired very quickly, losing much of its impact after only a couple of levels.

The game name, F.E.A.R. 2: Project Origin, is not only a vehicle for driving every non touch-typist games writer insane, but also refers to the combat unit the player finds himself in. However that, and just about every other bit of contextual information is horribly absent, so while you will garner from the game name that this is a sequel, nothing in the game itself really explains who you are, what you’re doing and why you should bother, save a pretty neat segment in the opening level. We won’t spoil that for you because it’s about as much background information as you’re going to get unless you’re a voracious reader – probably not a description of a massive proportion of the gaming population, I’d wager – with the game story told through a series of ‘tapes’ that you collect as you go.

The attempts at conveying a paranormal-tinged atmosphere aside, F.E.A.R. 2: Project Origin is produced from a most traditional mould. A linear path takes you from one mission objective another, asking that you pick up weapons, ammo and health boosts lying around at regular intervals, and the designers haven’t even learned much from older games this seeks to imitate, with some very clumsy interfaces, such as weapon selection not defaulting, for instance, to a certain grenade type when it’s the only type of the four you have, but making you go through a painful process to select.

Your character movement is a slightly odd ‘bobbing’ motion that can disorientate a little and you get ‘stuck’ on objects quite often. Since you’re mostly moving around in the dark, being unable to progress because there’s some ankle-high obstacle in front of you that you can’t’ even see is a little irritating. Happily, NPC (enemy) AI is very good for this kind of game. The usual fare is for enemy characters to stand stock still, in the open, firing blindly at you, charge wildly or just stick in the one, repetitive cover & fire cycle, but in F.E.A.R. 2, the enemies are smarter, flipping over objects like hospital gurneys, tables, cabinets and so forth and using them as cover, popping out at different places to take shots at you, attempting flanking maneuvers and rapidly scattering if you throw a grenade in their direction. This soon becomes the only reason you press on in the game, helping you ignore quite a list of other irritants.

And there are some other shortcomings in the game design. Along with the very linear gameplay – a real ‘corridor’ shooter in a quite literal sense, channeled along where the game designers want you to go and no real latitude to explore yourself – this is gaming design by numbers. The enemies take a massive amount of damage before they eventually keel over, you can’t lean out from cover but they can and it really just isn’t scary at all. But it also provides solid, entertaining combat with weighty-feeling weaponry and there’s the odd touch of flair – you’ll often want to delay sending chatting enemies to their maker for a few more seconds, for instance, just to hear what they have to say.

This game was reviewed on the Xbox 360 console. It is also available for PlayStaion 3 and PC.