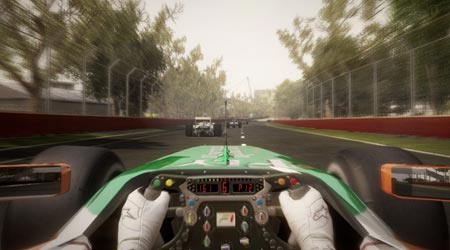 Once Codemasters dropped the act in attempting to be all things to all men and releasing poorly-considered action games to beef up their portfolio and please the shareholders, concentrating instead on their stock in trade, racing games, the gaming world regained a treasure. And so it is with F1 2010 from the Warwickshire, England, outfit, delivering serious racing game fans pure Manna from heaven. Following on from the glorious Dirt 2 and preceding (briefly, we hope) Grid 2, F1 2010’s simple title is a perfect reflection of the simple, brilliant, precise offering of Formula 1 racing it brings to your console.

Inheriting the same world-class production values of Grid 2, F1 2010 is amazingly authentic – we love sitting in our car in the garage while the car is up on the lift, checking out the race conditions, tactics and car setup, for instance, because it makes you feel so much a part of the racing weekend, bringing you right into the heart of what actually happens behind the scenes. Graphically, the game is quite breathtaking. The lighting is superb, with a simple change like the sun striking the front end of your car as you emerge from your garage into the pit lane (and it not doing so if the weather is overcast!) helping convey a real sense of immersion, and the carefully detailed cars all look stunning.

There are well thought-out targets for each race, depending on your chosen racing team – so selecting Lotus, for instance, results in tasks like ‘finish in 18th place or better’, rather than any wishful thinking like winning. This makes playing as newer, lowlier teams as attractive as jumping into the shoes of Hamilton or Webber and going for gold.

There’s also superb attention to detail off the track, delivering a quite staggering amount of content– even the media interviews and ‘agent’ are at least not horrendous additions – but once you get on the bitumen it’s all work and no play, resulting in quite a dull gaming experience. Once the wheels are rolling, it quickly becomes apparent that this is not your average, arcade ‘point and squirt’ racing videogame, instead requiring diligent and intelligent use of the throttle and brakes, and most certainly not at the same time through a corner. And that’s fine, exactly what you’d expect from an accurate F1 simulation, but the result is also excessively austere. In all the time we played, we didn’t see a single ‘off’, collision, retirement or spin that didn’t directly involve us (and a penalty that was unfailingly attributed as our fault). Presentation-wise, there was little sense of participating in the spectacle (circus, even) that the motorsport has become, and it’s just not very much fun. It can be very, very hard work just negotiating the various circuits and it feels laborious, not helped much by the rather dry pronouncements or advice from your crew back in the pit.

It’s probably accurate to say that the depiction of racing that Codies’ F1 game gives us is as thrilling as the real-life sport (and it’s definitely the best F1 game for years) but that is to say not, frankly, very thrilling at all. The grown-up equivalent of slot car racing, success at F1 owes as much to the cars, pit stop tactics and remote tinkering as it does to the drivers and these days it’s left in the dust by stablemates such as WRC or MotoGP in terms of thrills, spills and delivering edgy, exciting racing. This year’s real-life F1 season may have had an excitement boost, but anything would have felt better than what’s gone before. Like snooker, winning at F1 requires consistency, precision and patience and in that respect, F1 2010 is likely to be embraced with great enthusiasm by the ‘hardcore’ race-game fraternity but leave more casual gamers bored and frustrated, compounded by the lack of split-screen multiplayer support.