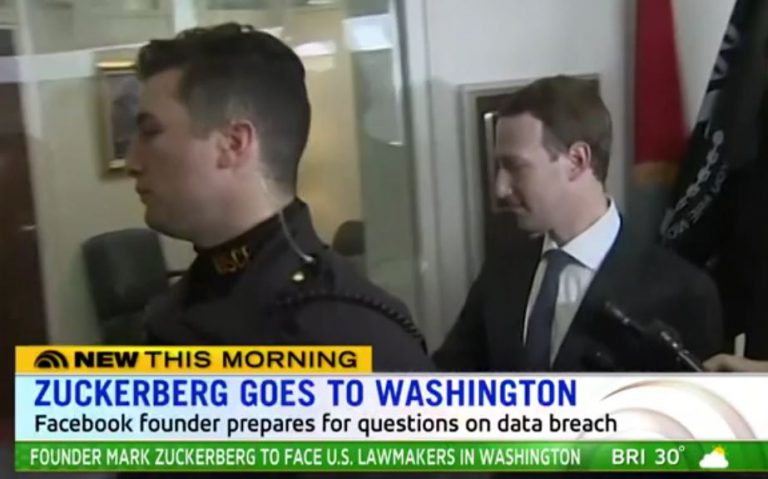 Facebook founder Mark Zuckerberg has gone to Washington to face-off with Senate lawmakers about the abominable and possibly illegal conduct of the company he heads.

He traded his characteristic t-shirt and jeans for a more sombre suit. Mark, contrary to popular opinion, in your case clothes don’t make the man.

He posted a 6-page explanation, much of it self-serving with a bit of mea culpa (through my fault) thrown in for good measure.

I don’t buy his opening statement. “Facebook is an idealistic and optimistic company. For most of our existence, we focused on all the good that connecting people can bring. As Facebook has grown, people everywhere have gotten a powerful new tool to stay connected to the people they love, make their voices heard, and build communities and businesses.”

Sorry, Mark – that should read opportunistic rather than optimistic. Your entire business model has been to collect gigabytes of information about your users and sell it to the highest bidder.

I don’t care if Facebook facilitated #metoo or that more than 70 million small businesses now use it to grow and create jobs. More fool #metoo et al. – you now have their ‘intimate’ details as well.

Mark, you may save Facebook by manning up, messiah-like, saying you can save it! But it is going to take a lot more before people trust you and Facebook again. Offering to put the genie back in the bottle is cold comfort to those 87 million abused by Cambridge Analytica.

And let’s not even consider the countless more – the 2.2 billion member silent majority – manipulated daily by unscrupulous advertisers. They make you and your shareholders filthy rich.

But I fervently hope the cure does not kill the patient as like it or not Facebook fills a social need.

Zuckerberg goes on, “But it’s clear now that we didn’t do enough to prevent these tools from being used for harm as well. That goes for fake news, foreign interference in elections, and hate speech, as well as developers and data privacy. We didn’t take a broad enough view of our responsibility, and that was a big mistake. It was my mistake, and I’m sorry. I started Facebook, I run it, and I’m responsible for what happens here.”

Zuckerberg’s agenda – minimise the fallout. He must avoid tough Senate scrutiny of  his ‘tools’. At all costs, he wants passive ‘self-regulation’, not active legislation that would break the money-making machine.

Val showed viewers how to access Facebook through Settings, Apps, Websites and Games, and turn all apps off. It does not affect Facebook’s operation but stops apps accessing your data. “That is only the start. There is so much more you should do to remove personal data.”

Armitage: “What should you do if you are one of the 87 million (317,000 Australians) affected by the Cambridge Analytica data abuse?”

GadgetGuy: Well here is the thing. There is nothing you can do as advertisers have your data already. It is all out there, and that is the problem with Facebook playing fast and loose with your personal information.”

GadgetGuy: “We are going to see two things come from the Hearings. First, Facebook will be doing a lot of apologising and telling the Senate what it can do [without legislation] to prevent its abuse. But more importantly, Zuckerberg himself is on trial. He is a programmer, not a CEO and it will be important to see how he reacts and if the government beleives him sincere. He wants us to believe Facebook can reconfigure itself moving forward.”

The Sunrise video is here.

Last weeks editorial “If you don’t # DeleteFacebook it’s your funeral” was GadgetGuys most read in years. It is no longer a case of if you delete Facebook but what needs to happen if Facebook is to survive.

A wise saying.  “You judge a man by what he does when he knows he won’t be caught.”

Zuckerberg seems to subscribe instead to the adage  “It is easier to ask for forgiveness than permission.”