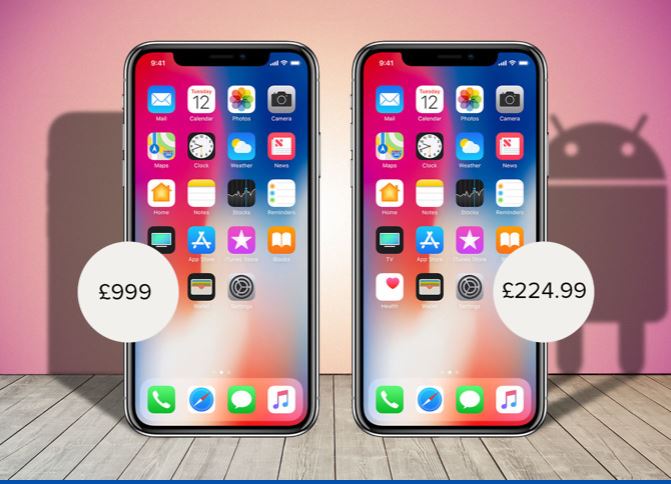 Fake smartphones ranging from the iPhone X to the Samsung Galaxy S9+ are readily available on auction sites and at some dodgy Australian phone retailers.

News.com.au reports that eBay is awash with fake iPhones. It is not eBay that is at fault – it is just one of many auction sites, and at least it closes down fake suppliers quickly. Fake iPhones are rife in online forums like Craigslist, Facebook Marketplace, Letgo and other sites.

Fake smartphones are a new gold

In Sta. Cruz, Manilla last week police found more than A$5 million worth of fake iPhones and iPads.

At the time a Malaysian trader was selling commercial quantities of fake iPhone 8 Plus. These were cheap knock-offs using an Apple iOS looking skin over Android.

Earlier this year the U.S Department of Justice arrested a Chinese national living the U.S. who participated in a massive iPhone and iPad counterfeiting operation. He smuggled in more than 40,000 iOS counterfeits with the same look and feel of authentic Apple products, right down to the appropriate trademarks and Apple-style packaging.

And in Beijing police raided a massive counterfeit iPhone operation that produced more than 41,000 fake iPhones worth US$19 million. That is one of many such factories that produce fake electronic goods. Let’s not even mention clothes, shoes, handbags, sunglasses and more.

But the overarching term fake smartphones covers many sins

Fake smartphones is perhaps not the best description. It also covers those remanufactured, refurbished or repaired with many being sold as new. Then there is the shady grey/parallel import market as well.

We cannot publish some of Skontos’s comments due to liable potential. He named (off the record) several prominent MVNOs (mobile virtual network operators) and well-known online retailers (not any major bricks and mortar retailers) who indulge in shady practices.

“If you are lucky you will get a bargain on manufacturer’s run-out stock. Often they are manufacturer repaired and refurbished. In no way ‘new stock’. Worse still is third-party remanufacture using new cases and used components,” he said.

“These ‘fakes’ are not certified for the Australian networks. This is something that costs legitimate makers hundreds of thousands of dollars to do. They may work on some 4G bands but not all Australian bands,” he said.

Skontos went on with numerous examples. Note he was not implying all parallel importers use such tactics, but …

We would love to name and shame but can’t. This MVNO has also branched out into utility and NBN reselling. It is one of the worst culprits. It currently offers over 100 phones.

The majority of these are grey/parallel imports from one Hong Kong reseller. That reseller has a reputation for refurbished ‘as new’ equipment.

But we can name BuyMobile.com.au that is offering nearly 400 phones online. Genuine Australian stock is few and far between.

Digging deeper we find the terms of business (paraphrased)

International stock is shipped directly from Hong Kong. This may come with an adapter for the original power supply instead of a local power supply.

Stock may be tested to ensure to reduce the risk of Dead on Arrival products. This may involve the phone being taken out of its box, the battery installed, and the handset turned on. Our technician may then test various phone functions to ensure that the handset or device is in working order. After testing, the device is wiped, cleaned, shrink-wrapped again and presented as the quality assured, brand new item that it is. It is not uncommon for the sometimes present, “do not break” seal to be broken with our stock due to this fact.

You can drive a truck through that explanation. Its a thin cover for fake smartphones!

We spoke to Danny Adamopoulos, Motorola Product Manager for ANZ about the issue. “We do not supply the MVNO or Buymobile.com.au.”

“Yes, the grey market is rife here. It can offer lower cost phones as it is all online. Try getting a warranty from them. When someone rings us about Motorola support we try to help, but we can’t do anything if we did not sell it.”

“The dead give away is a cheap power adaptor and broken box seals. Some use non-genuine parts like screens and batteries. Whack it in a new looking case (chassis), shrink wrap it, and you have a new looking phone. Most will not work on all of Telstra’s unique LTE bands”.”

“You are taking a massive risk. There are so many genuine phones here from $100 upwards that you don’t need to do that. It’s the greedy ones that want a late model iPhone or Android flagship that are most at risk.”

GadgetGuy’s take – if it is too good to be true! Fake smartphones are rife

One little thing that genuinely certified phones can do is call 000 emergency without a sim. No grey/parallel/remanufactured or fake phone can do that. They dial 911 or something else.

Some phones are downright dangerous here. Dodgy chargers can cause fires. Dodgy phones can  give false signalling on carrier networks that can result in incorrect overbilling billing and dropouts. This has led to a raft of complaints via the Telecommunications Industry Ombudsman with the Optus network. It is not Optus’s fault that some of these handsets can cause issues.

We can’t name and shame everyone because of the potential for litigation.  But before you buy a cheap smartphone search for the supplier’s name and the word ‘complaints’. And don’t believe the reviews on websites either – BuyMobile has dozens of them!

The ACCC has a warning here.