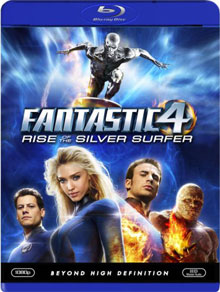 Suffering from the usual ‘desperate to be normal’ guff that afflicts nearly all American superhero treatments on TV or in the movies, Fantastic Four: Rise of the Silver Surfer could have been – should have been – way, way better than this.

As with the first film, the sequel spends too much time focussing on its protagonists writhing in angst over the most mundane issues imaginable and too little time having any fun. The almost unbearably cool premise of a havoc-wreaking alien surfer dude tearing up the planet is torn repeatedly asunder by the painful, pointless posturing of the Invisible Woman (Jessica Alba) whining about having a ‘normal’ life, wedding, family, whatever.

When what she, and all the others, should in fact be doing is yelling from the rooftops that they’re the coolest superheroes alive, kicking some alien butt and actually entertaining everyone who’s come to escape from their ‘normal’ lives for 92 minutes and want to see some action.