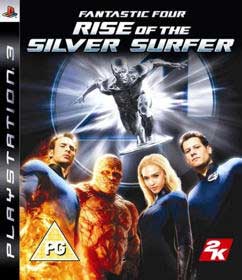 It’s the game of the film, folks, no surprises there after reading the name, so what would you expect when picking Fantastic Four: Rise of the Silver Surfer up at your local games store?

Did you love the fighting in the movie, watching Ben smash seven shades out of Dr Doom? Are you expecting a fast-and-frantic ‘beat-’em-up’ fighting game, where you can choose whichever of the four characters you want, even switch between them when you feel like a change, and lay your ninja moves down on the bad guys? If so, stop reading here and go out and buy the game – you’ll love it.

Did you love the sense of adventure that these four close buddies shared, embarking on dangerous but exciting missions, exploring caves (eh?!) and working as a team. If so, be prepared for a lot of looking for buttons to push and the occasional ‘fusion’ attack.

Did you feel your heart race out of pure excitement and anticipation as you watched Jonny ‘flame on!’ and scream into the sky in flames, Susan flicker out of view and sneak into a heavily-guarded laboratory, Ben rush headlong into danger and crush everything in his path, or even Mr Fantastic himself zip madly around a falling superstructure to pin it in place and save the day? Did you just want to be a superhero, put the cool powers to the test and, well, show off? If so, we hope you like your excitement in short, sharp bursts.

Fantastic Four: Rise of the Silver Surfer is a fighting game, pure and very, very simple. You pick a character, get thrown up against successive waves of exceedingly dumb enemies, and duke it out until no-one’s left standing. If, as with the comics and the movies, getting into fights meant that you always had to work closely, collaboratively, as a team to defeat the enemies, co-ordinating your powers for a result, things might not be so bad. As it is, that’s almost never necessary; just punch, punch and punch again.

For subject matter so potentially exciting, so COOL, it’s extraordinary then that the game’s designers have introduced a totally artificial (in the sense that it doesn’t exist in the comics, or films) restraint – limited superpower duration. In other words, your superpowers, whichever of the four characters you control, only last for a few seconds, initially, before they automatically cut out and you have to wait for them to ‘recharge’. The time limits effectively get a bit longer as you progress through the game but, essentially, the same design flaw remains throughout.

What a waste! Chances are, the main reason anyone’s going to be picking up a game based on the Fantastic Four – or any superhero come to that – is to live out the fantasy of being that superhero, messing around with the cool abilities and just having fun. So, with this single design decision, all the other superb work on portraying the superpowers of the heroes is undone. Assuming that the main target audience for this game is early to late teens, who have gone to see the movie and now want to relive it for themselves at home and get to control these great characters, this is a missed opportunity that, at best, will make them long for a game that truly does justice to the ‘Four’ but, at worst, may turn them off the gang forever.