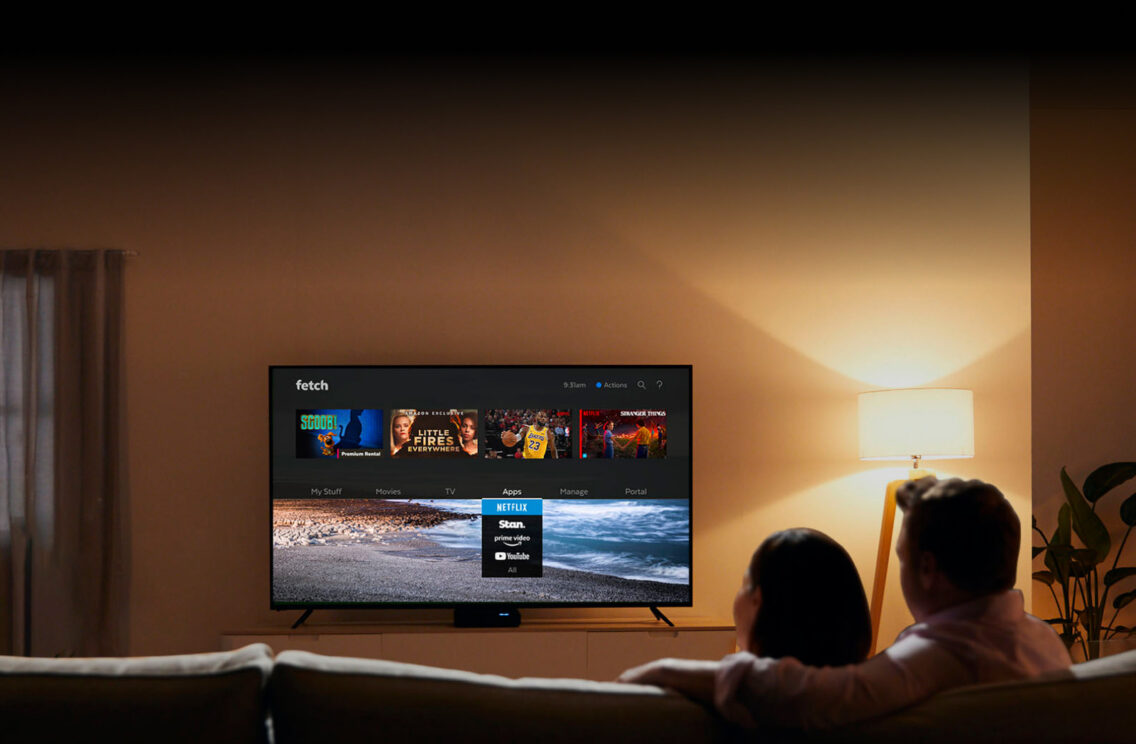 Packed with future-proofing upgrades, the new Fetch TV Mighty (Gen 4) is moving with the times in the fight for pride of place in Australian lounge rooms.

The Fetch TV Mighty is a Personal Video Recorder, meaning it can automatically record your favourite shows each week and even record several channels at once. The onscreen TV guide is much more reliable than the one embedded in the broadcast signal.

The box can also perform time-bending tricks like letting you watch the start of a show while you’re still recording the end – which is handy if you want to watch something on delay and fast-forward through the ads.

As an added bonus, if you’ve got a Fetch TV Mini in the bedroom, you can stream recordings from the hard drive of the Fetch TV Mighty in the lounge room. There’s also access to the five free-to-air catch up services.

Admittedly, many households don’t watch a lot of free-to-air television these days, apart from sport. The Fetch TV Mighty also has a range of 50 streaming subscription channels, including ESPN, Nat Geo, Discovery, MTV, Optus Sport and more. You miss out on some of the top shelf content that’s limited to Foxtel.

On top of this, the Fetch TV Mighty is also a respectable 4K streaming video box, with access to movie rentals and purchases as well as a range of streaming services. As such, it’s pretty much a one-stop entertainment shop.

At first glance, you wouldn’t pick the difference between the new Fetch TV Mighty (Gen 4) M681T model and the (Gen 3) M616T it replaces. Realistically, Fetch TV isn’t really expecting people to go out and replace their existing Mighty, instead this is a hardware refresh going forward to make the most of today’s technology as well as what’s on the roadmap.

Most of the improvements are under the bonnet, designed to bring the Fetch TV Mighty (Gen 4) into line with the Fetch TV Mini 4K released last year. It’s a major hardware refresh which impacts almost every aspect of the box.

For starters, the Fetch TV Mighty (Gen 4) gets a major performance upgrade. It doubles the performance of the processor, bumps up the RAM from 3 to 4 GB and doubles the flash storage to 8 GB. There’s still a 1 TB hard drive for storing recordings.

The four built-in TV tuners support the new DVB-T2 standard, while there’s also support for the new AV1 codec favoured by many streaming services. In terms of connectivity, the box steps up to Bluetooth 5.0, HDMI V2.1 with HDCP 2.3, and Wi-Fi 6.

In the short term, perhaps the most significant upgrade is that, like the Mini 4K, the Fetch TV Mighty (Gen 4) now supports Dolby Vision – which looks better than standard HDR10. The Gen 3’s lack of Dolby Vision meant that, when watching services like Netflix, I’d typically favour the streaming app but into my Dolby Vision-capable LG OLED. The Gen 4 now closes that gap.

The only drawback in the upgrade is that the new box loses a USB port, going from 2 x USB3.0 to only 1 x USB2.0. Realistically, that’s unlikely to bother many people. If you want to tap into your own media library, apart from playing content via USB the box supports DLNA streaming and features the Plex app.

You’re certainly not short of things to watch, with Fetch TV further expanding its range of streaming services in the last few months.

All Fetch TV boxes support the top tier services in Netflix, Stan, Amazon Prime Video and YouTube, along with niche services like Hayu, BritBox, Acorn, Vevo, Paramount+, Vimeo and others. The notable exceptions from this list are Disney+, Apple TV+ and Foxtel’s Kayo/Binge.

The extra grunt under the bonnet of the Fetch TV Mighty (Gen 4) shines through in slightly faster load times for menus and the onscreen TV guide. The box also feels a tad faster when changing free-to-air channels, but there isn’t a noticeable difference when launching streaming apps like Netlifx.

Realistically, Dolby Vision is the only improvement that you’re likely to notice for now, compared to the Fetch TV Mighty (Gen 3). If you have a Wi-Fi 6 router, the Gen 4’s new-found support for Wi-Fi 6 might help if you struggle to stream reliably.

Support for the more efficient AV1 codec will also help with smoother streaming in bandwidth-challenged homes, as the streaming services slowly make more use of it.

Looking to the future, DVB-T2 tuners are ready for the day Australia embraces the new terrestrial free-to-air broadcast standard, which is more spectrum efficient and resilient against certain types of interference. The broadcasters have already trialled DVB-T2 and Free TV Australia says it’s on the road map but doesn’t have a definite timetable.

Moving to DVB-T2 would lay the groundwork for 4K terrestrial broadcasts, although the free-to-air broadcasters haven’t shown any interest in 4K and Foxtel has only dipped its toe in the water.

These days, we’re seeing more innovation from the streaming services. Support for HDMI V2.1 with HDCP 2.3 opens up support for 4K at 120 frames per second ‘High Frame Rate’ content. That could pay off in the long term, even though Netflix has only just started dabbling in 60 fps with short films like Meridian.

If you’re after a Personal Video Recorder, then the Fetch TV Mighty is by far the best option in Australia. If Foxtel is a must in your home, then you might look to Foxtel’s iQ5 instead. If you’d never use the PVR features and are just interested in streaming, the Fetch TV Mini 4K is a worthy competitor to the Google Chromecast, Apple TV and Amazon Fire TV stick.

The new Fetch TV Mighty (Gen 4) lays the groundwork for what lies ahead. The extra grunt leaves headroom to handle new formats and more demanding apps. DVB-T2 tuners are ready when needed, while Wi-Fi 6 and AV1 will help on the streaming front.

Probably not as an upgrade, but yes if I didn’t already own a Fetch TV Mighty.