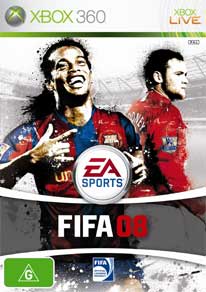 Every year, as we draw closer to the summer, soccer video game enthusiasts gather together to bore the rest of the gaming community to tears and endlessly debate which of the two giant football games is superior: the latest version of EA’s juggernaut FIFA series or the relatively new upstart from Konami, PES, or Pro Evolution Soccer. This year will be no exception but it may be a closer debate, because FIFA 08 is fantastic fun and, more importantly, plays like a real game of football (apologies to AFL fans here, but after that first ‘soccer’ reference, I’m sticking to calling it ‘football’ or ‘footy’!)

FIFA 08 is the latest in a series that began on the Sega Mega Drive at Christmas 1993 and was called ‘FIFA International Soccer’. In the intervening 14 years, EA has drawn a lot of criticism for just putting out a slightly-tweaked game each year. That isn’t the case here – hasn’t really been the case before – but the fifteenth game in the series is definitely the charm. FIFA 08 is a brilliantly-executed videogame simulation of the sport, with great graphics, physics & animations, loads of leagues & teams, interesting game modes and a superb online playing experience.

Most importantly of all, though, FIFA 08 makes you play football just as you see it in real life; plenty of passing in all directions, using the right players to create opportunities, constantly pushing your opponents and testing the defence and, if it all comes together, taking a shot on goal – a shot that, just as with the real-life game, often has to be a real corker to find the back of the net.

On the field, ball control has been improved and there’s a great bag of tricks to wrong-foot defenders once you learn how to use them all. The crowd noise and in-play sound effects are spot-on, and the commentary often makes very accurate-sounding observations that can leave you open-mouthed in surprise.

The ‘Be a Pro’ game mode is perhaps the most fascinating, albeit pretty tricky to play with any success. In this mode, you can choose your favourite field position and then you stick to it! So if you’ve always wanted to be a glory-seeking striker, this game mode puts you up front and it’s up to you to work on your positioning, make the runs and, if you get the ball passed to you (because, apart from being able to put your hand up and call for the ball, that’s beyond your control in this mode too!) If you’re a seasoned football gamer, this mode is a real challenge and much like the real-life broadcasts that fixes the camera on a single star player.

If you’re more of a novice, it’s worth putting in a bit of practice in the other game modes first, because ‘being a pro’ is hard work and you’ll find yourself constantly out of position and therefore ineffectual – especially getting caught offside. The crowning glory of this game mode, however, is online, allowing for you and up to 4 other buddies to play on one team against another 5 players you meet online.

FIFA 08 may not silence fans of the other great footballing franchise but there is none more realistic or enjoyable. EA’s sports games become more comprehensive every year, with leisure time-sapping depth that could keep you engrossed way past the time the next iteration rolls around. The only real proviso is that, for relatively unskilled gamers, the realism in FIFA 08 may mean you end up with a whole lot of nil-nil draws.

Note: This game was reviewed on the Xbox 360 platform.