FIFA Street 3 out on February 28, for Xbox 360, PlayStation 3 and Nintendo DS 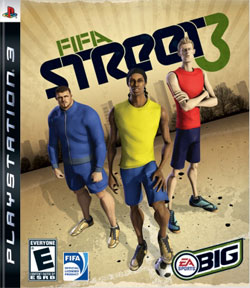 Electronic Arts Inc.has announced that FIFA Street 3 will be in Australian stores from February 28. This arcade football game features international superstars Ronaldinho, Peter Crouch, and Gennaro Gattuso on the front of pack and delivers a new look that turns the game’s global football icons into stylized action heroes who perform over-the-top trick moves.

The third chapter in the FIFA Street series from EA SPORTS creates a hyper-real world where football’s biggest stars perform to an eclectic selection of music seamlessly infused into their surroundings. Using a simplified control system that enables you to easily perform over-the-top trick moves, the game’s environments pulsate and explode to life with every well-timed tackle, outrageous trick move or unstoppable shot on goal.

FIFA Street 3 features over 250 of the world’s best players representing 18 of the top international national teams. Decked out in authentic training kits, every player has been rendered into a stylized caricature and boasts his own, distinctive style of play with unique abilities to match. Whether you’re after brawn, brains, silky skills or crunching tackles to complete your team, the perfect street player is out there. Choose from Tricksters, Enforcers, Playmakers and Finishers to give you different options on the ball and make your mark on the street.