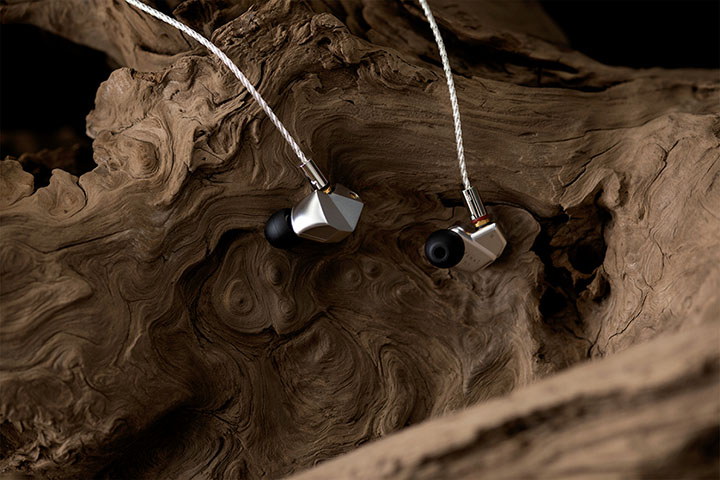 A confession: I approached the Final Audio B3 in-ear monitors (that is, earphones) with a sense of trepidation. Sometimes I find myself somewhat at odds with other hifi reviewers. Final Audio is usually well reviewed. It’s a high-end headphone and earphone brand out of Japan. What if I didn’t like these earphones? What if I considered them a complete waste of money? They are, after all, very far from cheap.

Forget about Bluetooth. Forget about aptX HD or LDAC or whatnot. These are wired earphones, with 1.2 metres of cable. The cable is apparently replaceable. I initially thought that they seemed to use some of proprietary connection at the headphone end. I didn’t try to pull them out. But it turns out that they’re called MMCX connectors and are used fairly widely in certain industries.

The cables use silver-coated oxygen free copper as the conductors. The insulation is transparent so you can admire the silver of the outer shielding. The left and right channel cables are separate, and twisted together for most of their length. The 3.5mm stereo plug at the end is a 90-degree model and made of stainless steel. Of course the working part is gold-plated.

One can argue about the relative merits of Bluetooth codecs. But what can’t be denied is that at their very best, they’re simply trying to be as good as a bit of wire. The Final Audio B3 earphones have some very good wire.

At the ear end of the wires are the buds. These have stainless steel housings and are, consequently, significantly heavier than the usual buds I use and review. Most of those are plastic. Final Audio says the total earphone weight is 36 grams. Left and right are marked by tiny letters and black and red rings around their connectors.

Inside each earpiece are two balanced armature drivers, one for treble, one for bass/midrange. No crossover network is used.

Five sizes of silicon tips are provided. The earphones also come with a silicone carry case.

Comfortable listening with the Final Audio B3

I experimented with the tips and found a pair that fitted me well. Extremely well. I don’t know what trick Final Audio used, but somehow they sealed my ear canals, and remained perfectly sealed, better than just about any light-weight buds I’ve used.

Perhaps it was in part due to the short lengths of transparent cable guides included with the earphones. These two curved pieces of plastic have a groove along their length into which you press the cables near the earbud end. You then hook them over your ears. They take up the strain of the weight of the cable, leaving the earbuds comfortably in your ears without being tugged by gravity. Despite the angular look, they were extremely comfortable to wear.

Those plastic guides also serve the function of isolating the earphones from mechanical noise. Like the tin cans on the ends of the taut string in a child’s home-made “communicator”, earphones are pretty good at guiding noise right into one’s ears. The touch of a hand on a cable can overwhelm the music. But the Final Audio B3 earphones, properly used, kept this well under control.

Final Audio says that the impedance of these earphones is 19 ohms and their sensitivity is 102dB (which I assume to mean for 1mW of input). It does not specify frequency response. Instead it describes its design aims:

Sound design with consideration to the relationship between spatial impression and dynamic range of music as well as physical characteristics of earphones and headphones. High clarity over entire frequency range and beautiful high range sound enable to hear the delicate touch of a piano and guitar picking perfectly.

It seems to have focused above all on clarity of reproduction.

I’ve described these things above, but from the contents of the (very nice) packaging, it wasn’t entirely clear – or indeed, at all clear – why there were short curved lengths of transparent plasticky cable guides in with the buds. Since there weren’t any instructions in the box, I went searching and found the Final Audio site for these earphones and found a downloadable PDF manual. That let me set them up correctly.

So what to listen to? These are $700 earphones. I suppose I could have just used an iPhone, or the inline USB-C to analogue audio adaptor on my phone, or the 3.5mm audio output on my Surface Pro 2017. But if you’re interested in earphones like this, you’re going to want something better to drive them.

Now let me be clear: these are all fine DACs in their own ways. And excellent headphone amplifiers. But if you use them with a mediocre set of headphones, the headphones will still sound mediocre. They can’t repair poor performance from whatever is plugged into them. I say this to make clear that what I heard was not the DACs, but the Final Audio B3 earphones.

And what I heard was an extraordinary openness of sound, and dynamic and musical clarity that far surpassed any in-ear monitors I’ve previously used, and most headphones as well.

First, I should remark on tonal balance. Lately I’ve succumbed somewhat to the lures of more powerful bass than is strictly accurate. That’s from using the likes of high quality Bose and Sony headphones. They do a fine job, but they do like to give one a little more of the bass than is on the original recording. I’ve succumbed so much, I’ve even turned up the subwoofer under my desk – the one that provides the bass for my desktop audio system – by around six decibels.

In one sense, this isn’t accurate. But in another, a lot of the music I listen to was recorded in the days of vinyl when there were pressures on recording engineers to hold back the level of the bass.

I say all this because I initially felt that the bass performance of the Final Audio B3 earphones was a little recessed. But after a while, I realised it was at the right level. The accurate level. If I wanted to replicate Sony Extra Bass sound I’d have to use a playback system with a bass level control, and turn it up.

That said, balanced armature earphone drivers are a little less suited to really deep bass than dynamic driver designs. Ultra-deep bass, such as the bass line in Bach’s Passacaglia and Fugue in C Minor, was quite recessed. But the bass guitar of Les Claypool in the Primus album Antipop was delivered at an accurate (but not overblown) level.

If you live for powerful, prominent bass, then look elsewhere. If you want balanced bass, then the Final Audio B3 earphones will deliver for you.

They did have a slight leaning towards brightness, but the sound was so clean, so undistorted, that the slightly more prominent treble was a delight. I suspect it added to the detail that these earphones revealed.

I ran through several decades of music, from Miles Davis’ Kind of Blue (1959) through Kansas’ self-titled debut album (1975), Mark Knopfler’s soundtrack to Local Hero (1983), the aforementioned Primus (1999) and Arcade Fire’s Neon Bible (2007). In every case the Final Audio B3 earphones drilled into the essence of the music, producing delightful results. They brought music to life.

There was an unexpected degree of spaciousness, especially around cymbals which seemed to hover wonderfully in the air in front of me.

And the detail was assisted by the excellent isolation from noise provided by the snugly-fitting tips.

The Final Audio B3 in-ear monitors are wonderfully engineered and sound glorious. They are for people who want true high fidelity sound in a compact package, and perhaps even while on the move.

One last note: the literal weak point of wired earphones is in the cable. Their failure is almost always because the metal has fatigued and broken. These earphones deal with that in part by allowing the cables to be replaced. But they have also been extensively tested. Apparently cables are normally subjected to stress tests by bending them five thousand times. According to Final Audio, these ones are bent fifty thousand times. You should get good life out of them.