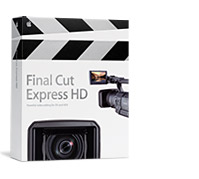 Apple very sensibly realised there was a market for video editing software that provided more control and features than iMovie, but without the complexity of Final Cut Pro. The result was Final Cut Express. Stephen Withers was asked to share his thoughts.

Be warned: Final Cut Express does involve more work than iMovie. If, for example, you?re used to the way iMovie will use the timecode to break out each shot as a separate clip, you may be disappointed to find that Final Cut Express expects you to capture the entire sequence and then go through a few steps to split it into subclips. The segments are automatically numbered, but are then displayed in strict alphabetical order rather than natural order:

But the program is flexible — you can watch footage from the camera, mark the in and out points of a clip of interest and then capture just that piece.

The premise seems to be that you have a lot more material on tape than you actually want to work with. You view the source material, select in and out points, and then capture the clips. This makes sense for long, scripted projects where there are typically multiple takes of each shot and capturing all the footage would occupy too much disk space, but it doesn?t seem to work so well with video of unstaged events where the goal is more typically removing only the worst pieces rather than retaining only the best of several takes.

Once the capture stage is completed, the basic editing workflow is about as simple as iMovie?s: select a clip, set in and out points (if necessary), and drag it into the timeline.

Final Cut Express supports a variety of editing techniques, from the basic ripple edit that moves the content following up or down the timeline to keep all the clips contiguous, to removing a particular clip while leaving the rest of the project untouched so an alternative can be dropped in and then slipped back or forth to find the most appropriate section to fill the gap.

One big difference between iMovie and Final Cut Express is that the latter can generate many of its transitions in realtime rather than making the user wait while the effect is rendered. It may not do so at full quality if the CPU speed is inadequate, but even an approximation is preferable to taking an enforced break even if a few frames are dropped in the process. Similarly, a broad range of video filters such as blurs, mattes and solarization are available and applied in real time. The order in which multiple filters are applied to a clip can be changed.

Clips and still images can be reduced in size for a picture-in-picture effect, and then animated using keyframes and paths.

Tip: using a spreadshhet is a cheap shot logging method

Titling is very flexible, as each title is built by Final Cut Express as a separate clip that can have effects applied to it before being overlaid on other tracks. Font, size, style, colour, tracking, leading, fill, bevel, glow and shadow are all manipulable, along with horizontal and vertical scrolling. Overlaying multiple clips can create more complex animations; for instance iMovie?s Drifting style could be simulated with a pair of crawls (horizontally scrolling titles) moving in opposite directions. Titles can be faded in or out by adding a blank title on either side and adding a Fade In Fade Out Dissolve transition.

We had no success following Apple?s instructions for adding titles to the timeline and had to manually create a new video track to take the titles. We?re prepared to believe it was our fault, but reading the instructions several times didn?t help.

Those looking for something fancier can turn to LiveType, Apple?s titling application that is included with Final Cut Express. This provides a variety of templates plus a stack of animated ?LiveFonts?, background textures and objects. Text can be further animated using effects such as Fly Out (the words move towards the camera and fade out), Pop! (individual letters explode) and Dirt Bike (the text zooms off to the right, leaving behind a rising shadow that resembles a dust cloud). Multiple effects can be combined.

The audio side is also well catered for. Up to 99 audio tracks can be used, which should be plenty for most projects. Although the interface for adjusting sound levels is very similar to iMovie?s in that you click and drag on a line to raise or lower the volume, it is far more effective as Final Cut Express?s Viewer window is taller and provides more room to work.

The program makes it easy to add voiceovers, and you can apply a selection of audio filters including a compressor/limiter, reverb, and sibilance and pop removers to improve the overall sound quality.

The package also includes Soundtrack for working with synthesised or recorded audio. Think in terms of a grownup version of GarageBand and you?ll have the right idea. You can assemble the provided royalty-free loops and one-shots (the software is compatible with other loop libraries) into compositions along with existing AIFF or WAV file and tracks you?ve recorded via a USB or FireWire audio interface or even through the Mac?s microphone input. Adjust the balance, add equalisation and effects, and (hopefully) you have an audio masterpiece.

If you want more than iMovie can deliver, you need to accept that you?ll have to invest more in terms of purchase price and learning time.

The documentation is extensive. There?s a 160-page Getting Started book, a 16-page leaflet describing the new features, and a detailed manual that runs to almost 1000 pages delivered as a hyperlinked PDF file. Although that last item is labelled Help and is accessible via the Help menu, it is not a help file in the traditional sense. There?s also a handy quick reference card.

The documentation for LiveType comprises a 176-page PDF (also presented as a help file), while Soundtrack comes with a 270-page printed manual duplicated as the PDF help file.

Final Cut Express can open iMovie projects, but the program repeatedly crashed while attempting to open some projects. That may have been a quirk of those particular projects as others opened without drama, but it left us feeling concerned about the stability of this feature. Opening even a malformed file shouldn?t crash a program if the data is sanity checked. Apart from the obvious reason of migrating from one program to another, we can see various applications for this compatibility, such as building a show reel from multiple classroom projects with colour correction to adjust for the different cameras and lighting conditions.

Completed projects can be sent back to the camera or exported to either iDVD (including chapter markers) or an MPEG-4 file.

Is $429 a good price? That largely depends on whether you?re moving up from iMovie, or if it?s saving you from spending $1499 on Final Cut Pro. If you can exploit many of the features, including those in LiveType and Soundtrack, you should be happy. Those whose interest is in tidying up home movies probably wouldn?t — and shouldn?t — buy Final Cut Express, but anyone that has made videography a reasonably serious hobby would do well to consider it, as should those producing corporate or educational videos.