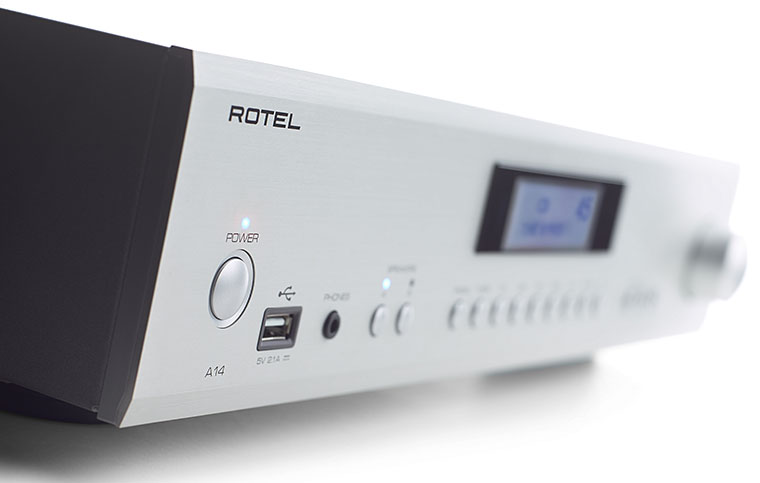 Indeed, they are traditional in the sense of being stereo devices, and traditional in terms of styling, but a number of the products in the line-up are also very much up to date with the sources.

Rotel has been in the business for decades, positioning itself as the producer of serious high fidelity products at reasonable prices. In the new series there are three good old fashioned integrated amplifiers, albeit two of them with digital inputs in addition to analogue, but all three with a phono input to that they are ready for vinyl collections.

There’s also a CD player, and two tuners. Both the tuners support FM and DAB+ digital radio (but not AM), and one adds network audio, which is not so traditional, but very much necessary in 2016.

The amplifiers are the A10, A12 and A14, with the A14 being top of the line. Internally they do their stuff with traditional Class A/B power amplifiers (these are analogue amplifiers that operate in Class A most of the time, and tip into Class B only when high power demands are made).

The A10 integrated amplifier ($649) is fully analogue, offers 40 watts per channel and features a slim, traditional appearance. As with all these products, it’s available in either brushed aluminium or black.

The A12 ($1299) ups the power to 60 watts and adds digital audio inputs, plus Bluetooth streaming with aptX codec support for higher quality. The unit can also act as a DAC (Digital to Analogue Converter) for a computer, with decoding of up to 192kHz music files.

The A14 amp ($1699) expands on the A12’s theme, with 80 watts per channel and a DAC supporting up to an ultra high resolution 32 bits with 384kHz sampling, plus Direct Stream Digital. It also adds network connectivity.

The CD player is the CD14 ($799), a solidly built (5.9kg) unit with both digital output (coaxial) capability and analogue produced by its own high quality Wolfson 192kHz DAC.

The T11 ($599) tuner takes advantage of the increasing delivery of digital radio in Australia, providing coverage of FM and DAB+ bands, but not AM.

The T14 tuner builds on that, adding network support to those radio functions so that it can handle either local (eg. Airplay or DLNA) or Internet (eg. Spotify) streaming audio. Its network functionality is built around DTS Play-Fi technology. It features a Texas Instruments 32 bit, 384kHz DAC chip.

The T14 and A14 can be controlled by means of Android and iOS apps, and any of the other products which are connected to one of them can be likewise controlled by the app.

The T14 in particular makes for an interesting product, combining the functions of a network audio source with the convenience of an FM/DAB+ tuner, still a relatively rare combination.

Peter Kao, the Managing Director of Rotel says, “The popularity of vinyl and near limitless availability of online music has created a resurgence of interest in HiFi electronics particularly among younger people. The new Rotel 14 Series components offer everything anyone needs today – USB connections for playback of digital music files, wireless streaming from all popular music services, Bluetooth, and phono stage inputs are among the connection options. Most importantly, these new products look and sound fantastic!”

The products will be available from authorised Rotel dealers commencing this month.