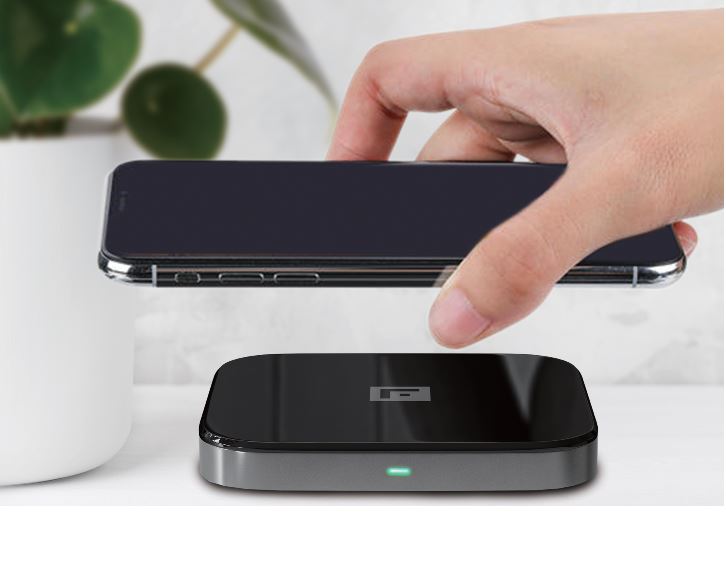 The Fiora 15W Qi charger comes as either a desktop or a car charger. Both are billed as the ultimate wireless desk charger. It is the Qi version of Qualcomm Quick Charge 3.0.

What is best is that it is Qi-certified meaning it has over-voltage, overheating and foreign object detection (FOD) so it won’t blow up while trying to charge your car keys.

Now there is not an awful lot to review with a Qi charger. But we will try.

A small 80mm square and 8mm thick. It has four little rubber feet and a USB-C PD 3.0 charge port.

We also tested it with our favourite Moshi ProGeo USB-C 65W charger as well – no issues. We could test the power draw via a Power-Z dongle, and it gave the pad exactly what it needed.

We tested with a Samsung Galaxy S20 Ultra (15W), and it showed as fast charge. The LG Velvet is 10W and shows fast charge. A pair of Galaxy Buds Live using 5W was also fine.

We did not have an iPhone handy, but Fiora provided this graph. It shows a very efficient charge algorithm.

Imagine the charge circuit in a windscreen (using suction cups) or dash mount (vent clip) and instead of a 240V QC 3.0 charger it has a 12V cigarette lighter QC 3.0 charger.

Not a lot more to say except that Fiora has included 1.5m USB-A to USB-C cable to suit most car setups.

Like the desk charger, it delivered spot on voltage and amperage for each test device.

Bot devices are well made, do as the marketing promises and are fairly priced.